Viewers were left ‘shocked’ and ‘appalled’ after a reality TV contested outed his transgender housemate on a new Channel 4 programme.

Genderquake brings together 11 people from a broad spectrum of gender and sexual identities to live in the same house for a month.

On Monday night’s episode, the first in a two-part series, viewers watched as Markus, a self-identified ‘gay man who wears make-up’, discovered housemate Romario, who introduced himself as a straight man, is also transgender.

Feeling ‘cheated’ by Romario’s ‘dishonesty’, Markus took it upon himself to tell fellow housemate Filomena – a woman who identified as straight and had kissed Romario after growing close to him in the early part of the show.

Viewers watching the drama unfold quickly took to Twitter to criticise Markus for his actions, saying he had no right to ‘out’ Romario as transgender. 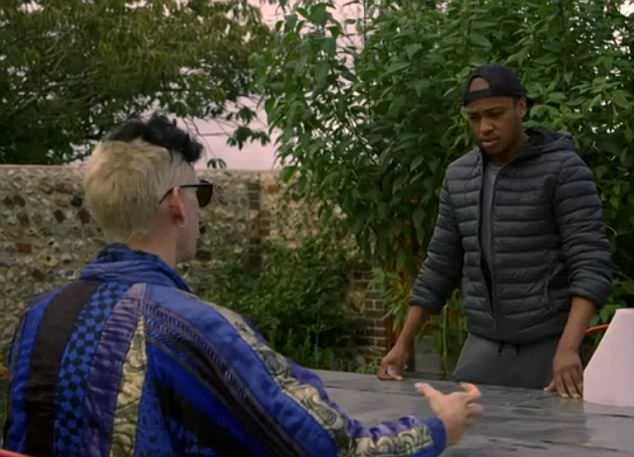 Confrontation: Viewers watched appalled as Markus, left, a self-identified ‘gay man who wears make-up’, discovered housemate Romario, right, who introduced himself as a straight man, is also transgender. He went on to ‘out’ Romario to the rest of the group 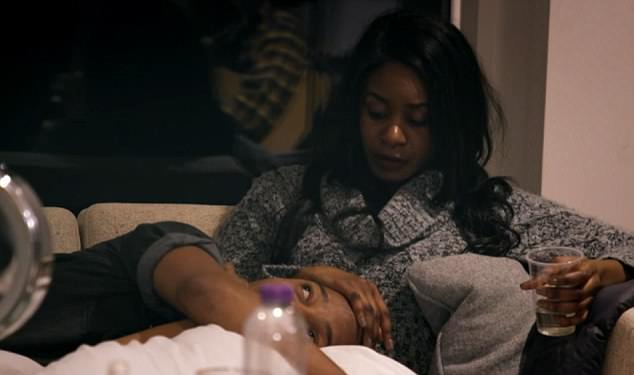 Getting close: Romario, lying down, had been spending time with Filomena, also pictured, a self-identified straight woman with a strict view of gender identity. She was furious when Markus told her that Romario was transgender

Backlash: Viewers were left appalled by Markus’ actions and criticised him for outing Romario

One wrote: ‘Marcus[sic] should NOT have just outed Romario, that’s absolutely disgusting. He has every right to be upset.’

‘Marcus[sic] is vile he took pleasure in just dragging her [Filomena] off and telling her,’ added another.

‘Never out a trans person,’ stated another, as many more agreed sharing their opinion on Markus.

Cameras followed the group as they visited Brighton on a day trip. At one point Romario took off his top to run into the cold sea, revealing scars on his chest.

When he returned three of the women, Howie, a self-identified lesbian, Cambell, a transgender woman, and Charlie, a transitioning woman, all noticed the marks. 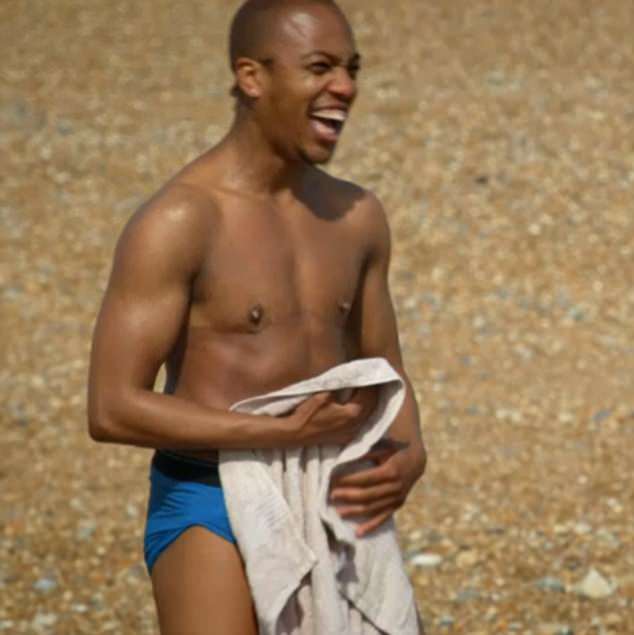 Rumours: Cameras followed the group as they visited Brighton on a day trip. At one point Romario took off his top to run into the cold sea, revealing scars on his chest 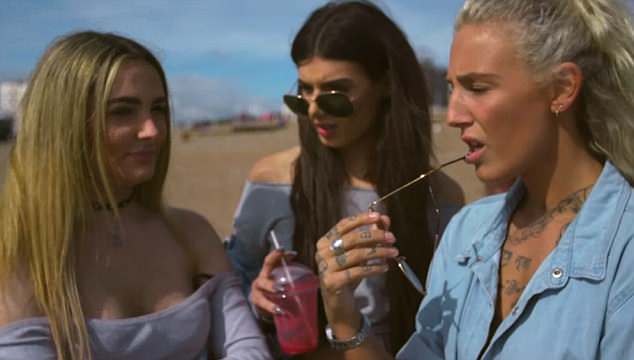 Suspicious: Cambell, Charlie and Howie (L-R) had noticed the scars on Romario’s chest and quickly came to the conclusion he was a trans man 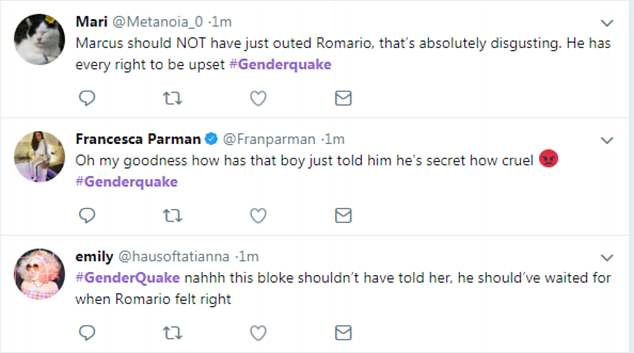 Furious: Viewers watching at home quickly took to Twitter to vent their anger over Markus

They immediately came to the conclusion that Romario had undergone ‘top surgery’ – a mastectomy for those transitioning from male to female – and that he was also wearing a prosthetic penis. Rumours quickly began to spread within the house.

Meanwhile Romario had started to grow close to Filomena and the pair shared a kiss during a drunken night at the house.

Filomena had initially angered her fellow housemates by saying that she believed the defining characteristic of a woman was being able to give birth, and admitted she held a very strict view of gender. 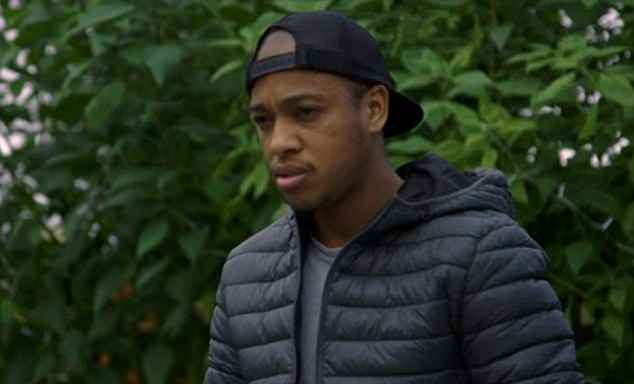 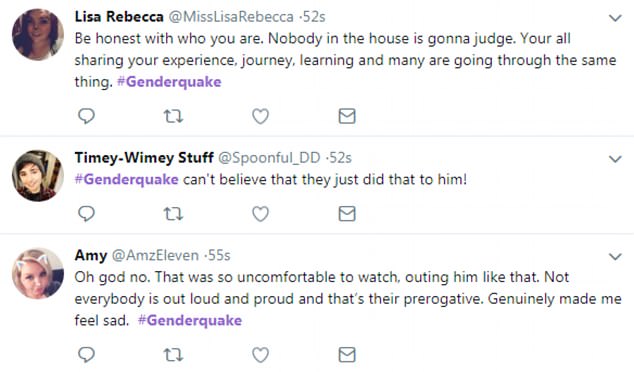 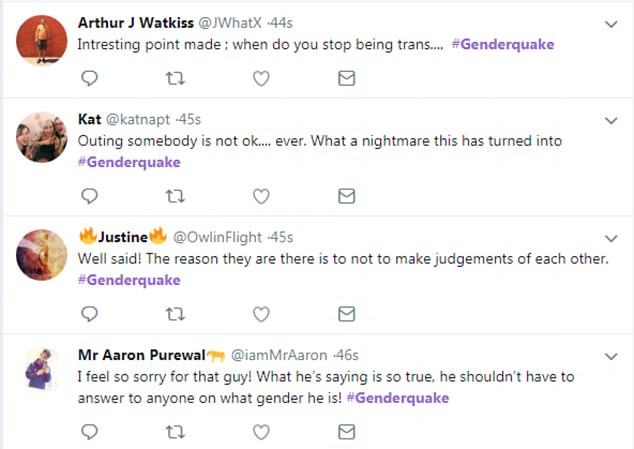 Viewers were less than impressed at the gossiping between the housemates, blasting them for outing Romario’s past

The issue came to a head on a night out, when Markus shared Romario’s secret with Filomena.

He explained his anger: ‘This is a privilege you knowing this information, this is not an entitlement, it is mine to keep.’

The group were divided over the way Markus had acted, with many agreeing that he shouldn’t have exposed Romario. 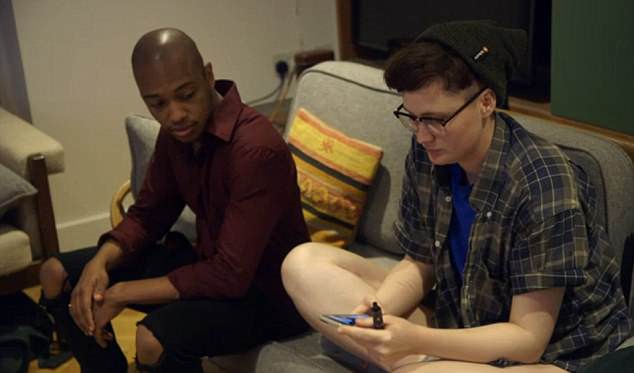