‘Watching this has broken me’: Louis Theroux documentary leaves viewers in tears over the final moments of a cancer patient, 74, who chose to end his life surrounded by his family

Viewers were left in tears as they watched the final moments of a terminally ill man who chose to end his life surrounded by his family, which featured in that latest instalment of Louis Theroux’s Altered States series on Sunday night.

In the documentary – called Choosing Death – Gus Thomasson chose to take a $350 ‘death cocktail’ to end his life following his diagnosis with stage four pancreatic cancer – because he refused to ‘die suffering’.

The 74-year-old retired respiratory therapist, who lived in San Luis Obispo, California, qualified for the End of Life Act, also known as AB15, which is legal in seven states in the US.

It allows physicians to prescribe life ending medication to a person who can reasonably be expected to die within six months; with the caveat that they must be of sound mind and strong enough to administer their own lethal dose.

Louis and his team were invited to witness Gus’ heartbreaking final moments as he passed away with his weeping relatives at his bedside, following his decision to take the lethal dose. The documentary showed Gus’ family telling him they love him, and keeping vigil at his bedside with champagne and music in his final hours. 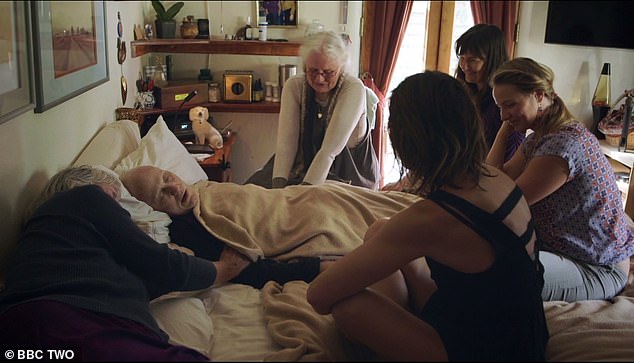 Another tweeted: ‘Tonight’s #AlteredStates has completely broken me and I can’t put into words how I feel about what I just watched.’

Another posted: ‘Anyone else cry like a little baby during the latest #AlteredStates by #LouisTheroux? Sensitively and delicately handled, gave all individuals involved the dignity they deserved, even at their most vulnerable.’

Louis visited California, one of seven states in the US where the terminally ill have the right to end their own lives, to investigate the moral and legal issues surrounding such a decision.

Louis also met with Final Exit Network, a non-profit right to die and pro-assisted suicide organisation in Florida that works to instruct those who ‘don’t fit the criteria’ of AB15 on how they can go about ending their lives.

The BBC has called the programme ‘an objective look at assisted death’ that ‘neither condemns nor condones the act of taking one’s life’.

Gus explained on the show that he refused to ‘die suffering’.

‘That had been a personal philosophy of mine my whole life,’ he said. ‘I deal with death, dying and hospitals.

‘I knew that was the way I was going to go, I would not die suffering, it’s going to kill me why should I wait for it to do that? I should kill it,’ he told Louis.

Gus was filmed receiving his $350 ‘death kit’, which he showed to Louis, and explained that it contained two single pills that he should take an hour before the decided time. 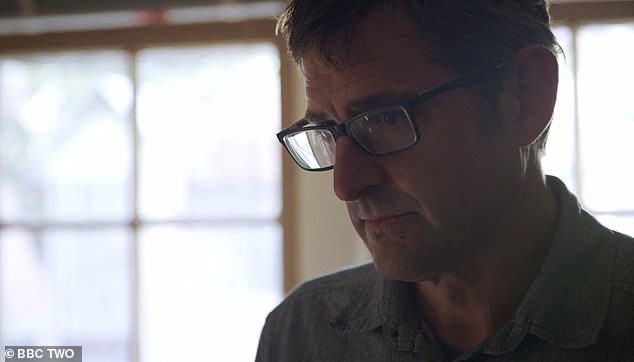 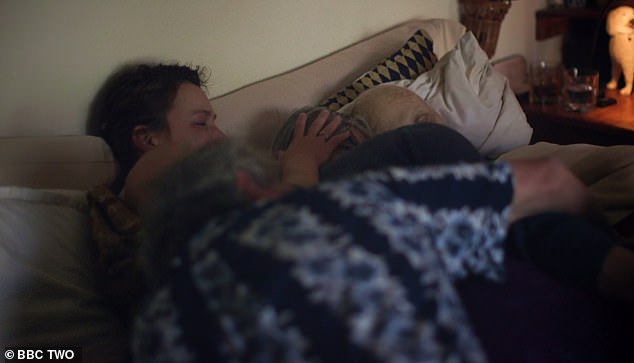 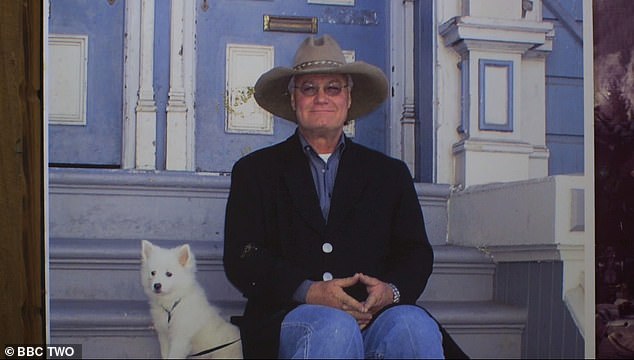 WHAT IS THE CALIFORNIA END OF LIFE ACT (AB15) AND WHERE IS IT LEGAL?

The End of Life Act is an option that permits terminally ill adult patients with capacity to make medical decisions to be prescribed an aid-in-dying medication if certain conditions are met.

Beyond California, assisted dying is legal in six states and the District of Columbia.

In the other 43 states of America, a doctor who administers lethal medicine to a terminally ill patient risks losing their license.

California passed the End of Life Option Act in October 2015, during a legislative session by Gov. Jerry Brown addressing broader healthcare funding. It came into effect in June 2016.

In May 2018 the act was overturned but in June this year California appeals court has reinstated the End of Life Option Act law, ruling that it can remain in effect, at least temporarily, while opponents’ legal challenges are considered.

This means that terminally-ill Californians who meet specific requirements can once again legally obtain life-ending medications while the case works its way through the courts.

‘One is anti-nausea, and a tranquilliser,’ he said, before holding up a bottle and adding ‘this is the stuff’.

‘A white powder that you mix with apple juice.’

His sense of humour still in evidence, Gus pretended the instructions printed on a sheet of A4 paper read: ‘Swallow, die, repeat if necessary.’

Gus told Louis that while he wanted to fight for his family, he would have taken the medication sooner had he not felt he was ‘letting them down’.

‘It’s a burden too because it applies pressure on your loved ones too, because they don’t want you to go,’ he said.

He turned to his wife Rheanna, who is ever present at his side on the show, and said, his voice cracking: ‘I feel like I’m letting you down if I decide to take that option… It becomes more and more difficult and complex.’

Gus’ family invited Louis back to their home once he’d taken the cocktail, and the documentary-maker arrived four hours later, when Gus had slipped into a deep coma.

His relatives had staged a bedside vigil with Dom Perignon champagne and music.

Rheanna told Louis: ‘He said to me this morning “I need to go, but I need your permission”, and I thought for sure that I had it in me to do that.

‘But I did for the first time break down with him and he said “Ok that’s good, let’s say how we feel about this”.

‘I broke down and cried, but I hadn’t done that with him. He wanted me to be strong. It’s a tough thing to make that decision when you’re still alive,’ she tearfully told the cameras.

‘[I told him] Just about how much he didn’t want to disappoint anyone, that he loved everybody and he lived a great life.’ 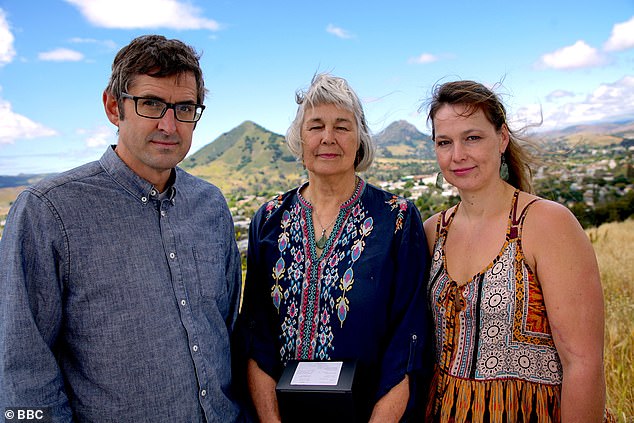 The documentary-maker visits California, one of seven states in the US where the terminally ill have the right to end their own lives, to investigate the moral and legal issues surrounding this situation. Pictured, with Gus’s widow Rheanna and one of his twin daughters Lilian in San Luis Obispo

There was a harrowing moment when a doctor, a friend of the family, also present at Gus home, raised fears the life-ending medication ‘might not be an entirely adequate dose’.

He told a horrified Louis: ‘It is unclear when he might wake up, if he will wake up.’

‘Hang on you think there is a chance that he might come round?’ Louis asked.

‘That is correct. And after a few days be fairly unresponsive. I understand that these things have happened from what little I have read about them but what to expect here I have no idea,’ the doctor said.

But Gus died seven and a half hours after consuming the substance.

‘Musician and carer, a family man and adventurer, above all he had lived a life of his choosing and he was now leaving having made his final decision,’ Louis said.

‘It is harder to imagine a decision freighted with more gravity than whether to end one’s life.

‘In exploring the options on offer in America I had seen reasons to be concerned. The dangers of an attitude that devalues society’s most vulnerable, the stresses of having to make such a huge decision.

‘But I had also met people facing death and uncertainty and found comfort in those that exercised the right to die well.’