Does 'The Voice' have a reverse sexism problem? 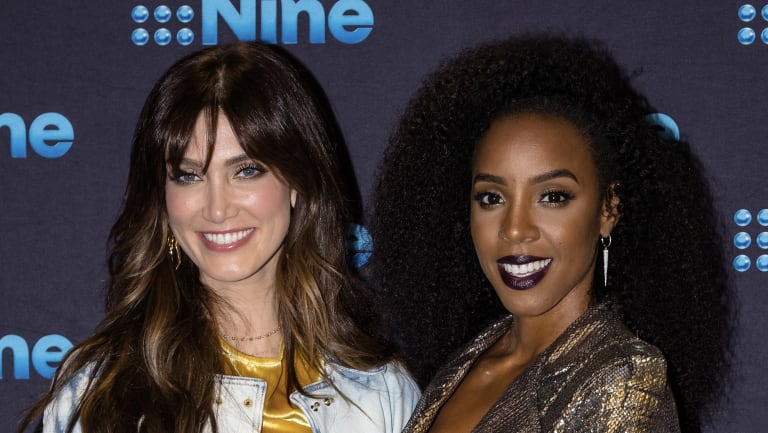 Delta Goodrem and Kelly Rowland have been accused of ‘reverse sexism’.

The Voice has a reverse sexism problem. At least that’s what you’d think if you’ve been paying attention to social media and a raft of hand-wringing opinion pieces on the subject.

It all started in the second episode of the season when judge Delta Goodrem suggestively told contestant Tim Conlon, “I really am a hands-on coach”, and then proceeded to lay a kiss on him after he gave her a red rose.

Cue the cries of outrage on behalf of Conlon who was so traumatised he described the incident as “a bit of fun”, and said of Goodrem “She’s so beautiful”.

Not to be outdone in the “reverse sexism” stakes, fellow judge Kelly Rowland also offered her professional opinion about former rugby player Conlon. “I mean, I just think you are just so hot … I mean, I am married, honey, but I am not blind,” Rowland said to him.

Then last week host Sonia Kruger upped the “reverse sexism” stakes when she jokingly suggested that contestant Jackson Parfitt undo some extra buttons on his shirt.

“Sonia Kruger getting away with sexual inuendo (sic) jokes only a woman can pull off. If a bloke said it though..” tweeted one fan of Channel 9s singing contest.

“What did I just watch!? I hate to be THAT guy…But imagine if the genders were reversed,” tweeted another.

And to really kick the “double standards” hornets’ nest, Kruger then offered to “keep” the singer who didn’t win all for herself. Goodrem then assured Kruger that this was “perfectly normal” because the singers are “very talented, gorgeous looking men”.

Lucy Almond summed up what many people were tweeting and commenting when she wrote for news.com.au: “As an avid watcher of The Voice I imagine the outrage if the scenario was reversed, and it was female performers targeted. And yet, here we are, the next morning and there isn’t outrage or uproar anywhere.”

Leaving aside that there was plenty of outrage on social media, this “scenario” could never be “reversed” for the simple reason that it’s not how sexism works.

To suggest that complimenting a man on his hotness is in any way comparable to the sexualisation and objectification that women live with every day is to be wilfully blind to the inequalities in our society -it's an insult to women’s lived experience.

We simply do not view men’s sexuality and physical appearance the same way as we do women’s.

Short of a major cultural revolution, men can never truly be “objectified” in our culture because they are always seen and valued inherently for more than their appearance. When women are objectified by men, very often, they are viewed as being an object for male pleasure — and nothing more.

We see this in the way men often try to silence and discredit women with insults based on their appearance, such as being fat and unf–able. Underpinning these insults is the idea that if a woman is not sexually attractive to a man, she has no purpose.

And this is where things get dangerous, deadly, in fact, for women. Research tells us that when men hold sexually objectifying attitudes about women they are more likely to assault them.

If women are just objects, rather than fully formed human beings, then is it such a big deal if you mistreat them? Or kill them. Let’s remember that twenty-six women have been killed by violence in Australia this year. That’s more than one a week.

And, no, not every incidence of objectification leads to assault or murder. But to pretend it has nothing to do with violence against women is an exercise in wilful naivete.

Research published in the Archives Of Sexual Behavior in 2016 revealed that "the more men are exposed to objectifying depictions, the more they will think of women as entities that exist for men's sexual gratification.”

And we know from #metoo that women from all walks of life have stories to tell of being harassed and assaulted by men who sexualised and objectified them.

Very simply, sexualising and objectifying women harms, ruins or even ends women’s lives. The “reverse” is not true for men.