‘He was so drunk he doesn’t remember walking down the aisle’: Wedding guests reveal the worst things they’ve seen GROOMS do on the big day

In recent years, brides have become infamous for their diva behaviour and overtly dramatic demands in regards to their lavish, over the top weddings.

So common is the phenomenon, it coined the term ‘bridezilla’.

But now it appears there are many grooms who’s attitudes also leave a lot to be desired, as a plethora of social media users took to a Facebook forum to share their personal experiences of the worst conduct they have ever witnessed from a husband-to-be. 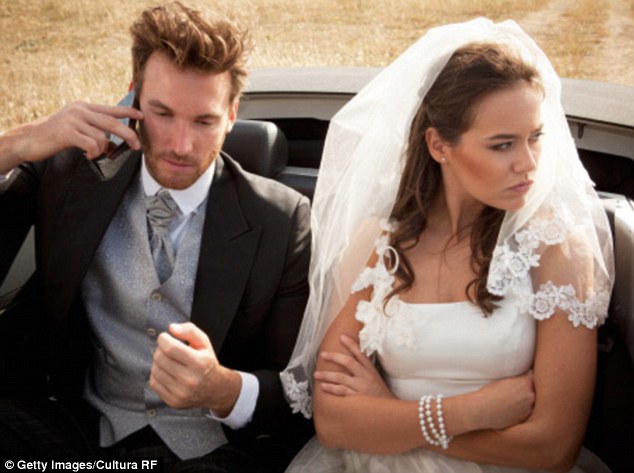 Racking up more than 60 comments, a slew of users recounted stories which ranged from funny and ridiculous to the downright bizarre and unacceptable.

‘Before the first dance, the groom gave a thank you speech and the bride took the microphone to say something herself,’ one user recalled.

‘But before she could speak, the groom said something to the effect of “I speak for us, no one wants to hear you talk; just stand there and look pretty” – we were all taking wagers on how long they would be married!’

The friend of a groom humorously recounted the story of his trip down the aisle.

‘I had a friend who got so drunk before his wedding, he doesn’t remember walking down the aisle and had to take all of their photos with sunglasses on,’ he said.

One groom was hungover and sick for his entire wedding day, while another was so drunk he blacked out walking down the aisle and was forced to wear sunglasses for the duration of the event

Another account revealed a wedding speech in which the groom described his idea of the perfect woman – one that did not match his wife.

A mortified wedding guest shared their story of the groom’s mother insisting her son share his first dance with her instead of his bride.

‘The groom caved to his mother’s wish that [she and the groom] would have the first TWO dances… and the First Dance of the couple could happen no sooner than 30 minutes after.’

‘It was so weird, the bride just stood there watching on the side of the dance floor – you could tell she was doing her best to fake a smile.’

Bridezilla’s may have laundry lists of detailed demands, but it seems many grooms are unable to deny their mother’s wishes

‘My groom got drunk the night before and was sick our entire wedding day – I was NOT happy,’ one disgruntled bride remembered.

A bemused guests detailed their memory of an excited bride who’s manicure garnered unwanted attention from her husband to be.

‘I went to my friends sister’s wedding. She got her nails done before and the groom told her she looked trashy with her nails like that.

‘They were divorced a year later.’