Today, I will go on strike for the first time in my life. I’m taking this action with my fellow Wetherspoons workers, and workers at TGI Fridays and McDonald’s. Together we’re supporting each other so we can have the strength to create change across the hospitality sector.

Our demands are simple: a minimum of £10 an hour for all workers, and the proper recognition of our union, the Bakers Food and Allied Workers Union (BFAWU). Although these demands seem simple, they’re about ensuring that everyone who works in pubs, bars or restaurants has what they need to live a happy life.

On the poverty wages we’re paid, life can be a struggle. Those of us who are students can dip further into our student loans to survive, but many don’t even have this “luxury”. When you earn less than £9 an hour, it’s impossible to afford a place of your own in Brighton, where I live. How can people like me live our best lives if we’re splitting bills with five flatmates and arguing over the shared bathroom?

So many people across the UK haven’t seen their wages go up in years, while prices rise year on year. This is why we’re standing together to say the time for change has come.

The basic wage of £10 an hour has to be paid to workers of all ages. Currently, across the sector, workers under 18 do the same work, yet get paid so little. They don’t get a discount at the checkout when they do their weekly shop, so why should they get paid any less? 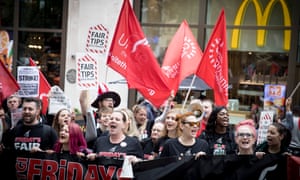 As we build our movement, we also need to push for an end to insecure contracts. Managers can use the rota to punish workers on a whim. If you do something wrong, or if they take a dislike to you, then you can be reduced to the minimum number of hours on your contract, which isn’t enough to survive on. We deserve that basic security, when we’ve been loyal to the company for years.

Working in a pub can be lonely. Of course you chat with your regulars, but long, unsocial hours mean you don’t always have time to meet friends. When you face an issue at work, it can stew for weeks. That’s why one of the best bits of being in a union and taking action has been supporting each other and talking about the issues we face. It’s brought together workers who weren’t friends before, or were in different cliques. We are now united in wanting to make our workplaces better – and it’s working. Even some of our regulars have said they won’t come in on the day of the strike because they think we deserve a better wage.

I know that lots of jobs are stressful, but no matter the job you do, you should get paid enough to live a fulfilling life. Having our union recognised would mean that we can sort out all the things that make our jobs unnecessarily stressful – and that we would have a real voice at work. We’ve already ensured workers get their rotas in advance, and halted night shifts, and the news of our strike meant the company rushed a pay rise forward.

Since we announced the strikes, there has been an incredible response. Wetherspoons workers have been getting in touch, as have workers from other pubs and restaurants. So many people face almost identical conditions that we know we have to join together to demand the change we need.

I’ve worked in retail and hospitality since I was 16 because I enjoy meeting new people every day. It’s time that it was possible to work in these jobs and live a decent life. We know this strike is only a first step. We need workers across the industry to do what we’ve done: join together and support each other. It’s not always easy – important things rarely are. But support from the public has helped to lift our spirits when it’s felt difficult.

This started with workers from just two McDonald’s branches going on strike. Now strikers are from TGI Fridays, McDonald’s, Wetherspoons, and Uber Eats drivers, and we know we’re on the right path. By supporting each other, we’re getting stronger every day – and eventually we will win.

• Katie Southworth works in a Wetherspoons pub in Brighton