What it’s like to paint a prime minister’s portrait

Fortune has favoured John Ward Knox this week. The artist’s dual-layer portrait of New Zealand Prime Minister Jacinda Ardern has been released from Australian customs just in time to be entered into the Archibald Prize.

It was Ms Ardern who approached Ward Knox to paint her for Australia's famous portrait prize, entries to which closed on Friday, in what the New Zealander artist describes as "a slightly unbelievable but also very happy coincidence". 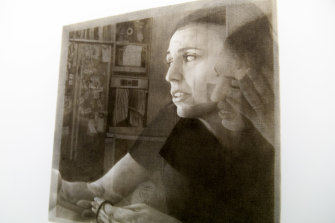 The two have known each other for a decade after meeting when Ms Ardern was the Labour Party candidate for Auckland Central. Ward Knox’s mother Barbara Ward was then, and remains, Ms Ardern’s electorate secretary and her partner, David Parker, is a cabinet minister.

Ward Knox said a number of other artists approached Ms Ardern to sit for a portrait for the Archibald but "due to her familiarity with my work…she reached out to me to do it and I very happily accepted". Despite their political and personal affinities, Ward Knox, who lives just north of Dunedin, says he tried to discard partisanship.

"I wished to capture Jacinda's humanity, her thoughtfulness and the simple fact of her being – just like us – a creature with habits, ticks and weighty thoughts that get expressed and held in the body… I'm not interested in her mythology, I'm interested in her humanity," he says.

Ward Knox flew to Auckland in February before lockdown for the sitting. "It was … quite a casual encounter in the end, where we sat at her kitchen table and had a cup of tea and talked," he says.

"It was a very easy process except for the fact that I was trying to do two things at once…both draw a moving subject and also make conversation with a person who I’ve known for 10 years but [have] seen less frequently since her position has placed her at the peak of New Zealand politics. So I made some very distracted conversation which she very graciously waded through.”

While Ward Knox’s painting style is controlled he looks for the "release of formality" on the part of the sitter. He used a camera to capture an image of Ms Ardern every 10 seconds and his portrait depicts her from two of these moments – eyes open and eyes closed, a hair elastic held loosely in one image and wrapped around her thumb in the other.

Created with black oil paint that is dry brushed onto the silk, the images shift as the viewer moves. Darker areas become more transparent, further revealing the second layer. A painting this size takes about 100 hours per layer to complete. "I’m a little bit of sucker for punishment,” Ward Knox says.

Ward Knox says Ms Ardern has seen a picture of the work and told him he had "captured some anguish, which maybe she was feeling at the time and maybe not".

The deadline for the Archibald, Wynne and Sulman prizes, which are open to both Australian and New Zealand residents, was extended due to the coronavirus. In the 99th year of the Archibald Prize, the finalists will go on display at the Art Gallery of NSW at the end of September.

The most important news, analysis and insights delivered to your inbox at the start and end of each day. Sign up to The Sydney Morning Herald’s newsletter here,  The Age’s newsletter here, Brisbane Times‘ here and WAtoday’s here.