Even if you can make neither head nor tail of this series involving dead people getting second chances at life, featuring Ted Danson as a kind of fairy godmother sent to guide the chosen ones onto their rightful path, there's something to be gleaned from the fate of Chidi (William Jackson Harper). After being saved from a falling air-conditioning unit, the terminally indecisive moral philosopher becomes adept at choosing a muffin in less than 60 seconds from the stall known as We Crumb From a Land Down Under. Yes, the Australian gags are running thick and fast in the season three return, which might prove another reason for neophytes to stick with it and find out what the hell is actually going on. 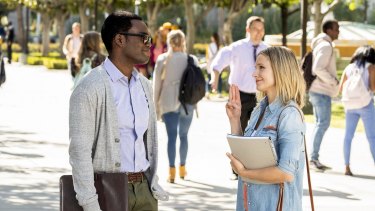 Gunman on the loose; check. Female recruit trying to prove herself; check. Middle-aged S.W.A.T. stalwart taking personal time to talk about his feelings; check. The S.W.A.T. universe is one of untroubled certainties and a stern moral centre. A star among the genre it is not, but it's a solid performer for viewers who like to know A leads to B.