SUMMERVILLE, S.C. — A white South Carolina woman who was dubbed “Pool Patrol Paula” has pleaded guilty to assault and battery for hitting a black teenager and telling him to leave a community swimming pool. News outlets report that 38-year-old Stephanie Sebby-Strempel pleaded guilty Monday to the June assault and was ordered to pay a $1,000 fine.

Sebby-Strempel had told the 15-year-old boy, Darshaun RocQuemore Simmons, that he didn’t belong at the Summerville pool, according to a Dorchester County sheriff’s report.

Simmons, who goes by DJ, told CBS News in July he was invited to the pool by a friend when Sebby-Stremple approached him. He said she verbally and physically assaulted him and forced him to leave. 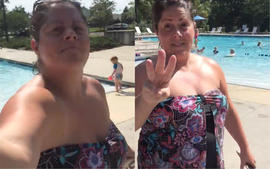 Stephanie Sebby-Strempel was caught on camera

“This lady walked up to us and was like ya’ll have to leave,” Simmons said. “We said, ‘Yes ma’am.’ When I started walking out she just started hitting me. … It was shocking.”

The woman later resisted arrest, shoving one detective into a wall and biting another hard enough to break skin. She was fired from her job.