Who'll find love on our virtual date? This week it's Faye and James

Who’ll find love on our virtual date? This week it’s Faye, 40 and James, 50 but will romance be on the cards? 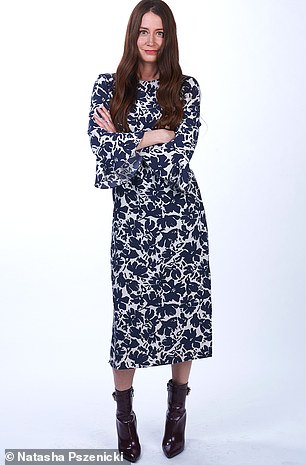 Faye, 40, (pictured) has been single for a year and has no children

I’ve had a few long-term relationships and even moved to Australia to be with someone in 2014, which was a disaster.

I’ve been more or less single for about six years now. Lockdown hasn’t helped. I went on one socially distanced date on Wimbledon Common and saw someone for two months when restrictions lifted last year.

I always get nervous before a date. I bought a bottle of Cremant and drank that with some snacks.

Single for a year, no children.

Founder of a pet care business.

Someone open, honest, and tall. He’ll love nature and animals as I do.

James is a handsome guy who put me at ease. He’s not my usual type, but I liked his accent and energy.

Easy To Talk To?

We bonded over our love of the outdoors. I go wild swimming while James adores the Welsh countryside. When I revealed I had never been to Wales, but met Tom Jones at a bar in the Savoy, James started singing one of his songs. It was great fun.

For the date, I sat in front of a blank wall, which James thought was funny. He said I looked like I was in prison!

James has a lovely calm nature and is a great storyteller. I discovered he had been in the police for 20 years and has three children. I was impressed he’d been to Reading Festival with his son who is 28.

I’d prefer not to date someone with children. At 29, my younger sister is only a year older than his eldest child.

SEE HIM AGAIN? If he was in London.

James stood at the kitchen counter for most of the date, which felt awkward so I told him to sit down.

He was a charming older man, but we are from different backgrounds. I’ve lived all over the world, whereas James enjoys the UK. That said, we had a lot in common. I couldn’t tell if there was chemistry over a video call. He suggested he might come to London to see me, and since the date we’ve been in touch by text.

If he lived in London I would see him again as we had fun, but because he’s based in Wales, it may be too far.

What do you think he thought of you?

I think he’s such a gentleman, he’d always be nice to whoever was in front of him. The date went well.

I would be comfortable introducing him, but I do feel we’re quite different. That said, this last year has taught us to appreciate people so much more.

Since my divorce in 2003 I’ve had three longish-term relationships, but have been single for two years after I decided to take some time for myself. I’m now ready to find love again.

I’m not usually nervous, but I was a little bit before the date. It was my first ever blind date.

The first thing I was struck by was Faye’s beautiful hair and how attractive she was. From the word go, she was warm and friendly, and the conversation flowed.

Owner of a heating company.

A woman who is gentle, kind, intelligent, fun and enjoys being outdoors.

Easy To Talk To?

There was loads of banter and she has a great sense of humour, so we were on the same wavelength. I ride a bike so she made fun of me for wearing Lycra which made me laugh. We spoke for two hours, but it’s difficult to get a real sense of someone in this space.

We had an honest conversation about the kind of relationship we want. At this age, neither of us wants to play games or be dishonest. She mentioned she’d like to travel round Italy in an open-top vintage car, which is what I wanted to do for my 50th. We both love food and wine and have worked as chefs. I have Italian family and wine has been a huge part of my life.

I realised I didn’t know her name and had to ask her at the beginning! Thankfully, she laughed it off. I did break into song at one point because I’m Welsh so I sang the Welsh national anthem. I also mentioned her hair about three times which is embarrassing.

I was flirting because I liked her. I found her warm, natural and friendly. Sometimes I thought she was flirting with me. She was playing with her hair and said I was handsome. I’m not used to compliments so thought she had guts.

I did tell her I would like to see her again. Distance isn’t a big deal for me.

What do you think she thought of you?

I think she thought I was pleasant and handsome, but I’m not sure if she saw me as a romantic partner.

Absolutely. My family are loving and open so they would like Faye.

Would you like us to find you a date ? Fancy a date with an eligible single like you? Or would you like to play Cupid for someone else? Email your — or their — details and a photo to [email protected]dailymail.co.uk