Christopher Rimmer feared the nipple police would be out to get him. But the critically-acclaimed Melbourne photographer went ahead and posted an image on Facebook from his new body of work, Confluence  – Tradition & Modernity and the Last Tribes of the Kunene River,  anyway.

It only took two minutes before the award-winning photographer’s poster image, of a proud tribal woman in traditional dress, was deemed in breach of the social media behemoth’s "community standards".

It was removed, and Rimmer was banned from the platform for a month. 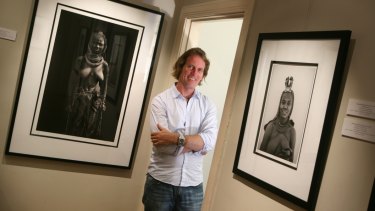 Photographer Christopher Rimmer, who often represents African themes, with some of his art works.Credit:Steve Lightfoot

UK-born, South African-raised Rimmer, whose work has been exhibited in prestigious galleries across Europe and the US and garnered international praise, is questioning why the male nipple is acceptable by Facebook but the female nipple is a violation of their policy. 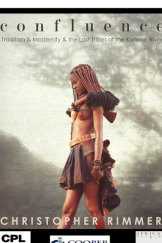 The cover image from Christopher Rimmer’s ‘Confluence’ exhibition was removed by Facebook for violating community standards, and the photographer banned for a month.Credit:Christopher Rimmer

“Quite clearly I am an artist not a pornographer," he says. "The fact that a male nipple is deemed acceptable by the Facebook censors whilst a female nipple is considered a breach of their standards (therefore obscene) is manifestly discriminatory and sexist, not to mention absurd."

He says he had been exposed to "absolutely horrific" content on his Facebook newsfeed in recent years, "including beheadings, cruelty to animals and crass, sexualised images of women and children".

"Yet my photographs of African women in cultural context and in their everyday attire are deemed offensive and unfit to be viewed by children."

The social media giant says it restricts the display of nudity or sexual activity because "some people in our community may be sensitive to this type of content". It has been contacted for comment for this article.

“I am dismayed that a company with the cultural clout of Facebook employs such simplistic and hypocritical criteria when deciding between what constitutes art and pornography,” Rimmer says.

Some nudity, “shared for a variety of reasons, including as a form of protest, to raise awareness about a cause, or for educational or medical reason", is permitted under Facebook's policy.

For example, "photographs of paintings, sculptures, and other art that depicts nude figures” are allowed.

Rimmer says he has been forced to delay the release of his work for a month and this has caused considerable expense and inconvenience to the curators, gallery owners, media and PR people who were anticipating the release of Confluence.

“Clearly, these calls are initially made by an algorithm. However, upon appeal, the flagged images are viewed by a human and in my case, following this process, the image was still considered obscene and the 30 day block upheld.

“I think it's important to remember that it is simply the female nipple that offends the censors at Facebook. The remaining female breast is acceptable but the areola and the nipple must not be visible. The absurdity of this is almost laughable however, in my case, it has been anything but.”

If Rimmer's beautiful photographs are not art, I don't know what is.

Now, my take on this is, if Rimmer's beautiful photographs are not art, I don't know what is.

He is, of course, correct in highlighting the hypocrisy, unfairness and inconvenience of Facebook’s narrow prism of what it deems as acceptable imagery of women.

Especially at a time when social media feeds are full of influencers and models in barely-there bikinis that should carry depilatory credits, or showing off their rumps Kardashian-style in thongs so small they can’t be seen.

But what also annoys the hell out of me is the double standard: the male nipple is fine but the life-sustaining female nipple is not. It is only women who are being censored as to what passes as suitable attire, while men can wear virtually anything (or next to nothing).

I believe the women in Rimmer’s shots are beyond beautiful – proud, fecund, strong and feminine – and the manner in which he has shot them respectful, sensitive and well, exquisite. He didn’t provoke or persuade these women to take their tops off in some gratuitous act of perversion: this is how they dress every day of their own free will, adorned in traditional attire that symbolises and honours their people past and present.

If his photos pose a risk to children’s decency then I say Facebook should review its allowance (if not encouragement) of photoshopping, which distorts reality, alters perceptions of ageing and encourages the defiling otherwise healthy bodies.

What we are seeing with this ban is pure, indefensible sexism.

The women in Rimmer’s photography are being celebrated, not denigrated. It’s a shame Facebook can’t treat its female users with a similar respect.