I’ve always been something of a flirt. Which was fine when I was a young and vibrant 20-something flibbertigibbet. But I’m wondering now how it works on a woman of 50-something, when the vibrancy has been tarnished somewhat by not only the years but the experiences those years have dished out.

I’ve always been able to strike up a conversation with someone, heck, that’s what this job is all about really. Listening, asking questions, being interested, engaged in what someone has to say. 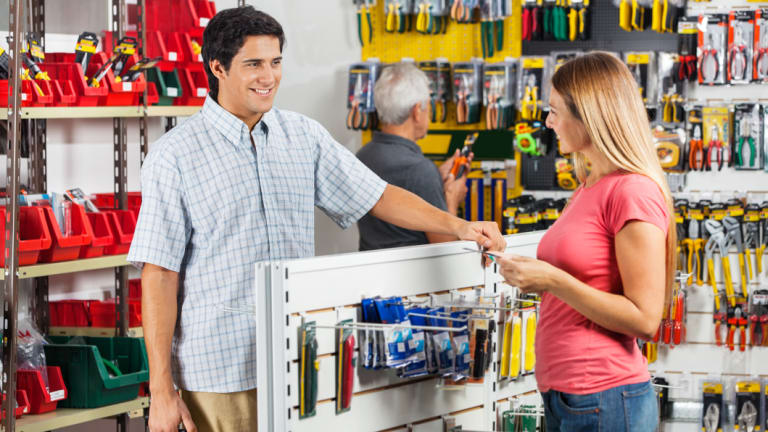 Excuse me sir, is this the right tool for the job?Credit:Shutterstock

But throwing some, perhaps innuendo is the right word, into a conversation changes all sorts of things. Not, mind you, that I’d ever do that with a work interview … well maybe once or twice, with a handsome rugby coach here, a butcher there …

I’m happy to get a little flirty occasionally if the situation is right. And sometimes I’ll admit I have trouble assessing that situation. No, hanging out with my girlfriends and their husbands, is not the right time. But throw me in the mix and I can hold my own.

But that’s where it gets tricky. What if they’re young enough to be your children, or work colleagues, or they’re married, or not wanting to have conversations with strangers? It all gets too hard sometimes.

I was interested to read Jane Gordon’s story Single. Over 50. And terrified of flirting. Our situations seemed similar, a certain age, single for more than a few years, but Ms Gordon was starting right back at forcing herself to ask strangers the time as a way of striking up a conversation.

I couldn’t imagine being back there.

My children hate it when I strike up conversations with strangers, and I often do, in queues, at events, in the supermarket.

And on the weekend at Bunnings.

I can’t understand why we waste time going to bars and nightclubs looking for love. Bunnings is ripe for the  picking.

Example one: I’m in the garden irrigation aisle. The bloody dog has dug the watering system up again and I’m looking for replacement parts. There’s a man, with nice biceps, unpacking watering cans at the end of the aisle. So I strike up a conversation about how every time I have to fix my watering system I think I should just buy a watering can and do it the old fashioned way. He smiles, flexes (I’m sure he did), tells me I should. I turn the corner of the aisle to move on and he says, “And still you walked past me”, and I’m thinking as I’m looking for lawn seed that that just about sums up my life.

Example two: another capable-looking man is walking around with a kitchen sink over his shoulder. “So you’re buying everything and the kitchen sink,” I say and he smiles, flexes (I’m sure he did), and we chat about how it’s possible to literally buy everything at Bunnings.

Which is why I’ll often sidle up next to strangers who just happen to be in the aisle where I think the item I think I need is in. I don’t know if this is the right screw, the right latch, the right tool for the job, do you have a better idea?

Most of the time they have no idea either, but I’m hoping that one day while I’m loitering in aisle six, the screws and tie-downs aisle, bwahahaha says the 13-year-old boy in me, that I might meet the capable, handy, knowledgeable man of my dreams.

But until then I’ll get a lot of jobs done around the house and be proud of my own efforts. Still looking for the right tool for the job, so to speak.

Gordon was following the advice of social anthropologist Jean Smith’s who’s written a book, Flirtology. Part two of the experiment involved having to compliment a stranger a day for five days in a row. I love doing this. I like your shirt. Your choice of book. Who cut your hair? I wouldn’t have any trouble completing this section.

But then it starts to get tricky, parts three and four involved making direct approaches in crowded rooms and even being bold enough to ask a stranger on a date. Gordon can’t bring herself to do it, and I know I would struggle too. Smith tells Gordon her view on prospective partners is too limited.

And I can’t help but wonder about the missed chance with the watering can man and whether I should have sprinkled a little more water on that potential seed of love.