Lately, my single, female friends have been telling me about the extraordinary messages they receive on sites like Tinder, OkCupid and Hinge.

I image the scenario playing out like this: the messages are written on cardboard signs which men hold up – like this actual line on the profile of a sun-kissed Liam Hemsworth lookalike: "Looking for love. Pls no foreigners." 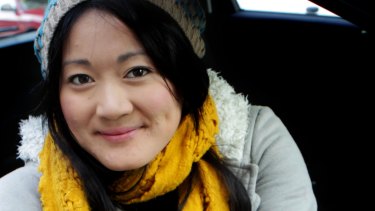 “An Asian female friend announced recently that the vitriol she experienced on Tinder became too much, and she deleted her account.”Credit:Domino Postiglione

Or this: "Only keen on Aussie chicks". Or this: "No Blacks or Asians". When my friend, whose parents are Korean, initiates a conversation with the Hemsworth doppelganger, he messages, "Sorry, not into Asians." She shows me the rest of the feed:

SHE: Aren’t you a foreigner yourself?
HE: I’m Australian.
SHE: So am I.
HE: Nah. You’re not white.

You’d never find a job ad that discriminates against applicants based on race. That’s against the law. Why is it okay, then, to announce a ban against engaging with a race of people on your dating profile?

Some openly announce "NO ASIANS/ NO BLACKS". I wonder how harmful this might be to an Asian, like me, or black person, to see this regularly – how this might

An Asian female friend announced recently that the vitriol she experienced on Tinder became too heavy a psychological burden. She deleted her account two days ago.

People are entitled to date whomever they want. Could it be possible, though, that the "sign holders" have received cultural signals that "black people are undesirable and possibly even dangerous", "Asians have nothing interesting to say", and those whom English is a second language can’t offer anything of value?

Our sexual preferences are shaped and altered by forces we seem, on the whole, to be very reluctant to critique.

There's an ugly sense of entitlement … you're allowed to want what you want as though your preferences were ethically neutral.

Dr Emma Jane, senior lecturer at UNSW's School of the Arts & Media, and a researcher in cyberhate and cyberbullying, says race is not the only filter people apply to potential partners.

"There’s an ugly sense of entitlement when you go into those spaces. You’re allowed to want what you want, as though your preferences are ethically neutral and not perhaps the product of broader stereotypes and systemic inequity."

Behind the safety of a small screen, it’s hard to remember there’s another human being, searching, often emotionally frightened.

Denton Callandar, research scientist with New York University’s School of Medicine, agrees that filtering out potential partners has a lot to do with our environment and upbringing. He studies culture and behaviours around sex, sexuality and race.

"Romance and sex are personal things. People get defensive, because it’s seen as a critique on who they date," he says.

"Your desire is shaped by many things you don’t acknowledge or see. This is not about people individually. It’s about us as a society. It doesn’t mean we shouldn’t question or critique where our desires come from."

The recently-appointed Race Discrimination Commissioner, Chin Tan, told me, “Online, as in all other aspects of life, racism and racial discrimination is never acceptable.

"Dating apps must reflect the same standards of non-discrimination as those expected in the broader community. I urge them to act quickly to remove users who do not comply with these guidelines and to effectively resolve complaints where racism is brought to their attention.”

When I ask friends about their habits on … Tinder, and OkCupid, they don’t deny most of the men they swipe right are white Anglo.

When I ask several friends about their swiping habits on apps like Tinder and OkCupid, and they don’t deny that most of the men they swipe right are white Anglo.

I wonder if I’m the only one weary of the extent to which our tastes are based on stereotypes we’re not encouraged to interrogate.

Dating apps have community guidelines that state users cannot publish any content that promotes, advocates for, or condones racism, but they leave plenty of room for interpretation.

William Ward, a lawyer who specialises in discrimination law at Meyer Vanderberg Lawyers, says, despite the existence of racial vilification laws, when it comes to dating apps there’s a difference between stating a preference, and vilifying a race. An individual user would need to express racially vilifying, offensive statements to breach these laws.

Is stating "No Asians or Blacks" enough?

"It would have to include some sort of offensive, vilifying or racially ridiculing statement," he says.

I’m not advocating for control over sexual desires. But, surely considering a potential partner ought to involve this introspection: am I assessing you based on my imagined idea of who you might be because of the colour of your skin?

I wouldn’t like to judge someone based on these imagined ideas. They are stereotypes, and stereotypes are often wrong.

I’d want to grant a stranger the dignity to be treated as an individual.