Escaping into the totally awesome universe of 1980s arcade games is soooo six years ago. That’s why Ralph Breaks the Internet is cutting the cord and going Wifi. The lively sequel to Wreck It Ralph, which features the continuing adventures of lovable lug Ralph (John C. Reilly) and scrappy Vanellope (Sarah Silverman), is irresistible, candy-colored fun sure to entertain kids well into the holiday season. And parents? You’ll appreciate some of the wit, but your presence is required if only to explain the meaning of the word “algorithm.” 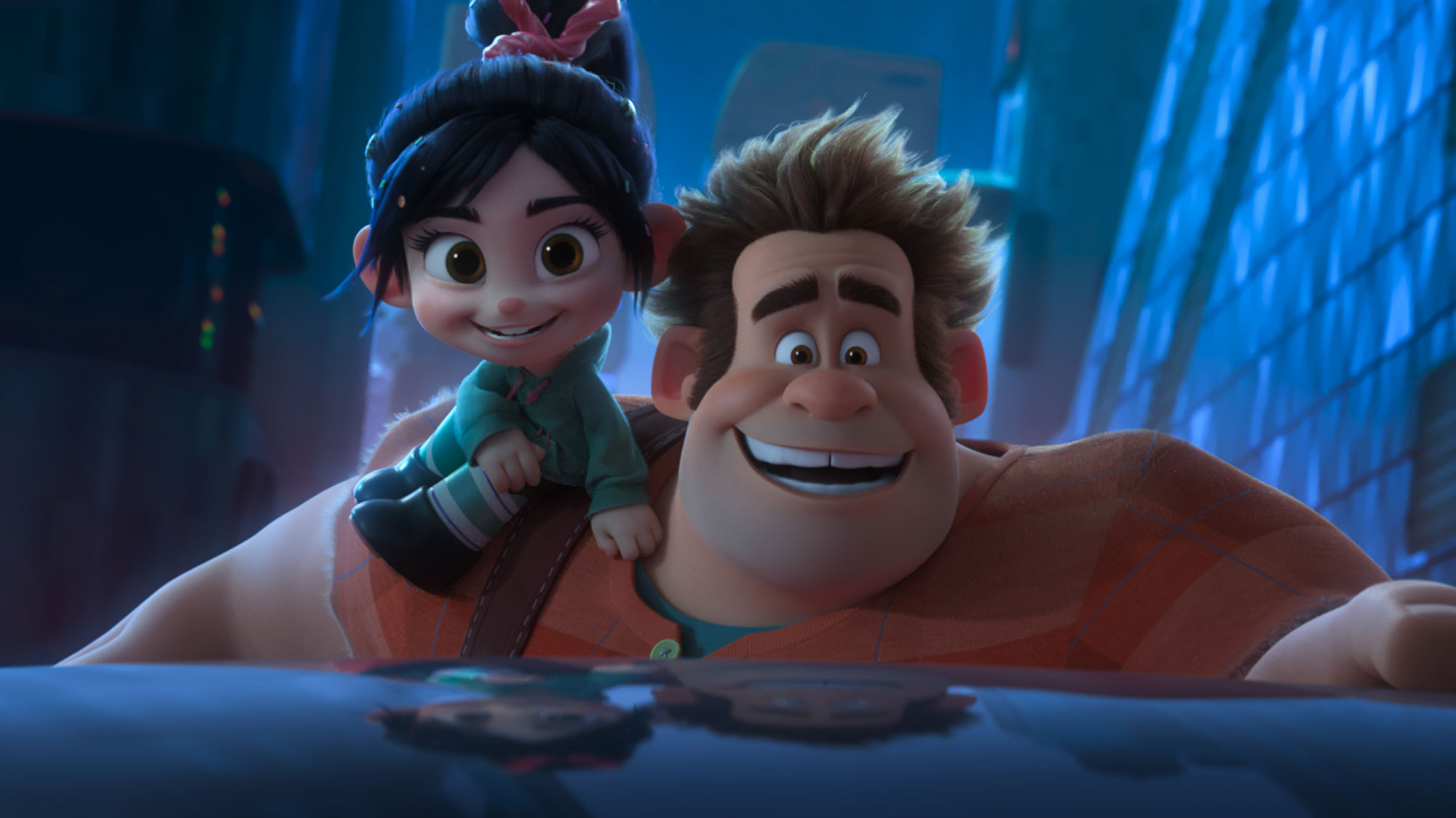 Wreck-It-Ralph never did capture the zeitgeist compared to other Disney or Pixar classics —the characters aren’t particularly groundbreaking or adorable — so let’s get you up to high-speed. For Ralph, the brawny bad guy from the video game Fix-It Felix Jr., life has been pretty sweet ever since he got the love and respect he so desperately craved in the original. He has his daily routine, his root beers and, best of all, he has his pal, Vanellope. She’s still the star racer in her own game, Sugar Rush. Still, she frets that her life is staler than a year-old Starburst. She longs for bigger and better.

She soon gets the chance. In a quest to find a steering wheel to fix her broken game, the best friends embark on a wildly imaginative — and, frankly, slightly unnerving — tour inside the Internet. It’s quite literally an information superhighway, a frenzied, colorful whirl of images, places and people. Annoying pop-up ads get a major shout-out. A wicked computer virus is considered a villain. First destination: eBay, where they attempt to bid on the replacement part but mistakenly owe $27,001. How are they going to get the money? Duh, they find out that it’s super-easy to earn serious coin on the World Wide Web.

So, um, Ralph Breaks the Internet isn’t the most responsible PG movie on the market. In addressing the very real issue of kids and screen time, this is an anti-cautionary tale. Why go outside when YouTube, Facebook and SnapChat are always at the ready! Plus, you can make actual money by posting silly videos of yourself and encouraging people to like it! Pity those poor neglected lemonade stands! In the most unsettling moment, Vanellope notes with squeaky-voiced glee that unlike her video game world, the sun never rises or sets in Wifi-land. Kids can just log on and play for as long as they want from wherever they want. As if the web is like a Las Vegas casino at 4 AM. Now consider that last year’s wonderful Coco emphasized the significance of family traditions. 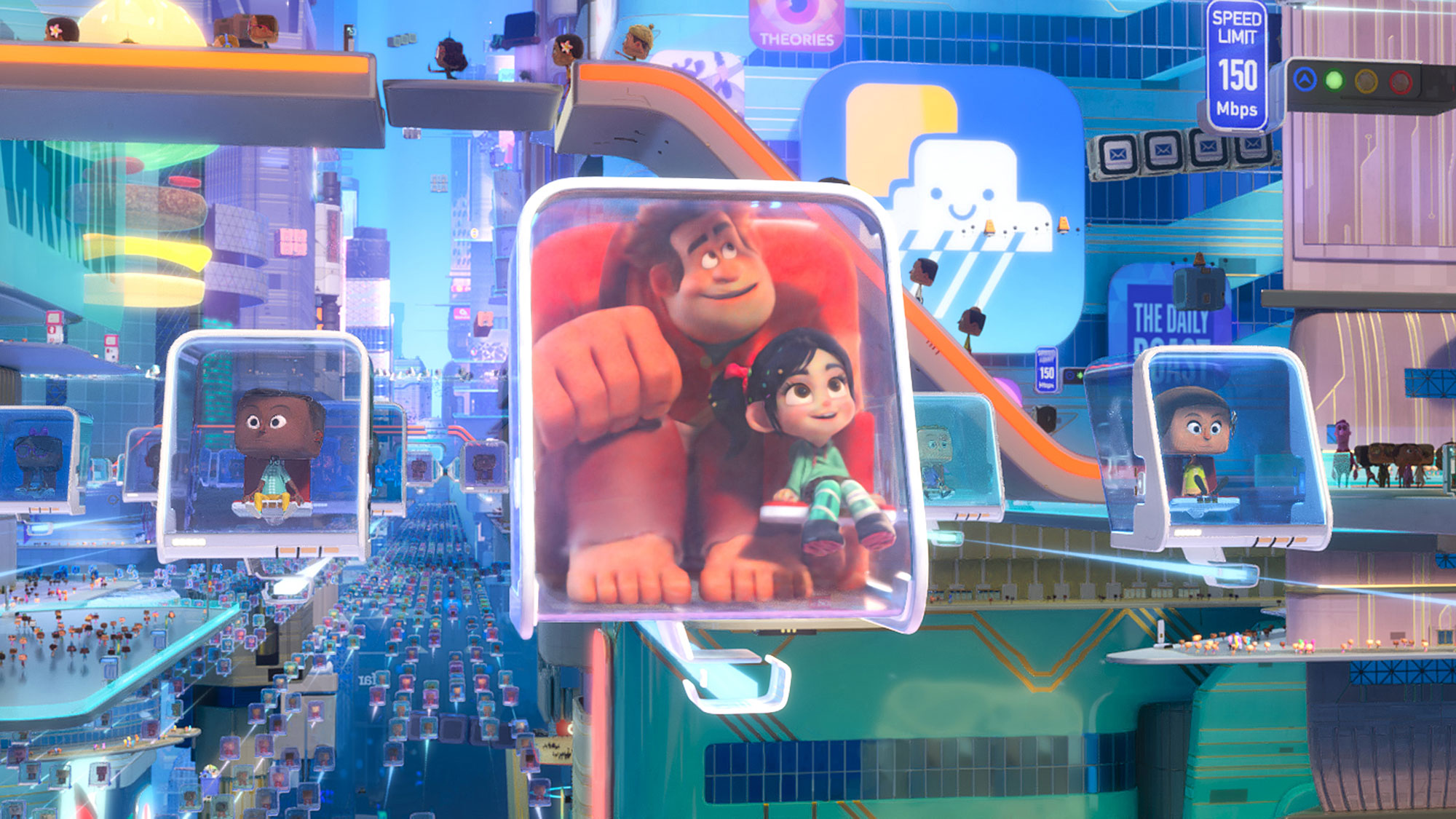 Deep-diving into the web does yield a few treasures. Ralph and Vanellope venture into a kick-ass racing game, where they try to out-drive a team of speedsters. And wouldn’t you know it, the leather-clad heroine leading the charge is voiced by Gal Gadot. I assure you the Wonder Woman actress is just as fearless in digital animation form as she is as a flesh-and-blood character. (Plus, the Israeli accent is nothing if not intimidating.) Vanellope is instantly enthralled. As well she should be.

Ralph does follow through on the promise in his movie’s title. But he’s MIA from the only scene that will inevitably go viral. And if you’ve seen the movie’s trailer then you already know I’m talking about the appearance of those Disney princesses. Vanellope meets them all during her journey to the requisite Disney portal, where the heroines are all too happy to give her lessons in royal etiquette. (Lesson No. 1: Look at your reflection in important water.) The sequence is hilarious and hype-justified, and I can’t wait to re-watch it with a remote control in hand so I can properly catch all the one-liners and sight gags. Also, cheers to the folks that managed to corral the original voices Anna, Ariel, Belle, Elsa, Tiana, Jasmine, Mulan, Merida, Moana and many more.

The princesses would be delighted in learning that Ralph and Vanellope do live happily ever after . . . with a catch. In fact, if you look past the rampant product placements and Internet PSAs, you’ll find winning life lessons about the pitfalls of insecurity and the importance of letting friends achieve their dreams. Now that’s the right click.

Ralph Breaks the Internet opens in theaters on Wednesday, November 21