Over the past two years the Today host has undergone a dramatic make-under, turning himself from all-round Good Aussie Bloke to Poster Boy for Male Privilege.

Let me count the ways in which Karl personifies gender inequality. 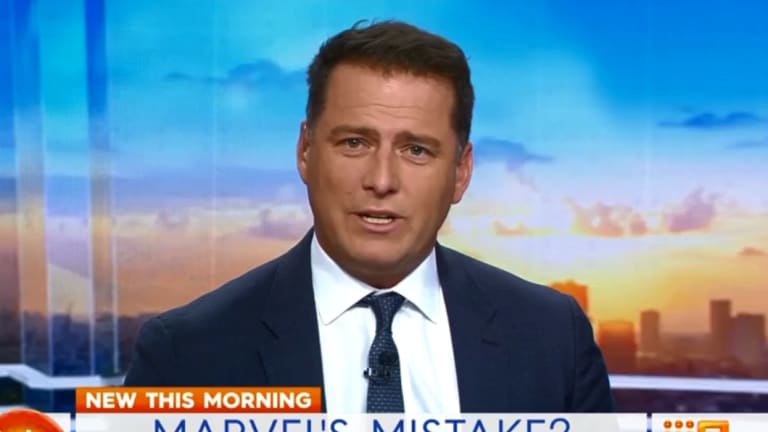 Karl Stefanovic has lost support from a key part of his audience, women, says Kasey Edwards.

First, there’s domestic inequality. When news broke that Stefanovic was leaving his wife Cassandra Thorburn after 21 years of marriage and three children, many female viewers started to see Karl in a different light. Like so many women, Thorburn had sacrificed her own professional ambitions and promising career to become the primary carer in the family, freeing up Stefanovic to build his career.

According to Thorburn she even used her own professional skills and experience to help turn her husband into a household name.

“The suggestions, the story ideas, the constant counselling of questions for years… people will also know how much effort I put into it,” Thorburn wrote on Facebook in 2016 after Today beat rival Sunrise on Channel Seven in the ratings.

And what did Karl do in return for all the years of Thorburn’s help and sacrifice? Left her for a younger woman.

Of course, marriages are complicated and there may have been many reasons why Stefanovic left his wife. We only know what we see and hear via the media. Much of it — hell, most of it — may not be true. But what Stefanovic symbolises for many women is one of their deepest – and not unwarranted – fears: ageing inequality. That, unlike men, when women lose their youth they also lose their worth.

And in television, especially breakfast television which trades heavily on female youth and youthfulness, watching an ageing male host trade-in his wife for a younger model is trouble.

And then there’s the inequality between men and women in the workplace. Again, who should exemplify the problem of male colleagues earning more than a competent and experienced woman, but — you guessed it — Karl Stefanovic.

Stefanovic’s silence on the show’s gender pay gap only added to the perception of male entitlement. What made Stefanovic’s position all the more galling is that he was a champion of pointing out the double standards surrounding men and women in on-screen roles when he had no skin in the game.

Remember when he wore the same suit everyday for a year — and no one noticed — to highlight the inequality in how viewers react to male and female presenter's clothes?

But that was the easy bit. Stefanovic’s pro-women platform started to fall apart when he stayed quiet on the pay gap between himself and Wilkinson that he was personally benefitting from.

And then, just when Karl’s feminist credentials were looking decidedly shaky, he made it clear that he was a signed-up member of the Boys Club after he and his brother Peter were caught slagging off Today co-host Georgie Gardener in the now infamous Ubergate conversation. Gardener’s shortcoming, apparently, was that she was “sitting on the fence” and not having enough opinions.

Of course, unlike Stefanovic who built his career on having opinions, if Gardner expressed her opinions more stridently she would no doubt be criticised for being bitchy, aggressive, a ball breaker, and too emotional. There is no acknowledgement in the Boys Club of the double standards that are applied to women.

In fairness to Stefanovic, flaunting his male privilege would, in the past, most likely have landed him a pay rise. It wasn’t so long ago we didn’t even call out male privilege and entitlement. It was just what men did — and what women accepted.

But if Today’s ratings are any guide, we’ve woken up to a new reality. Women are over male privilege and it’s turning us off our breakfast — or, at the very least, our breakfast TV.