There is nobody in the upper echelons of contemporary art quite like South Africa's William Kentridge. There may be artists with more natural talent. There are plenty whose works sell for greater sums. There are artists with a much better feel for colour or texture, or who draw with greater fluency.

Kentridge's works are not conventionally beautiful. Every awkward line, every form, every "stone-age" animation, seems to have been wrestled into existence. He doesn't set out to please an audience but to get under our skin and inside our heads. 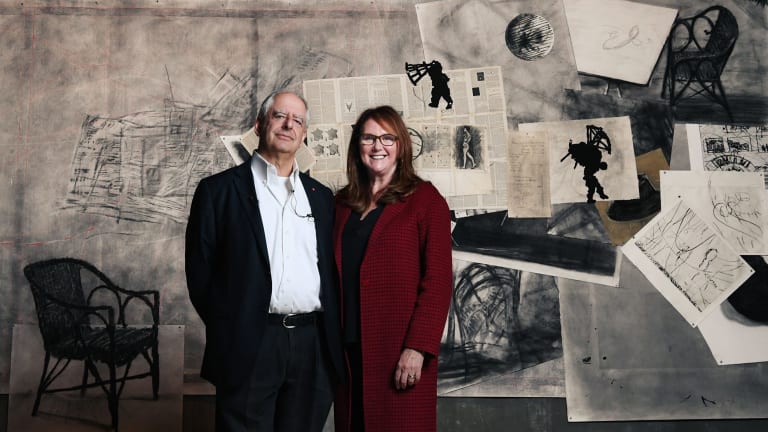 Artist William Kentridge with Naomi Milgrom, the exhibition’s principal patron, in front of Seven Fragments for Georges Melies: Day for Night and Journey to the Moon.Credit:Peter Braig

Taking all this into account, I can't think of another living artist with such a phenomenal range. Kentridge's work embraces the microcosm and the macrocosm, the vast sweep of human history and the minutiae of everyday life. It's profoundly serious and completely absurd.

These traits are on display in William Kentridge: That Which We Do Not Remember, at the Art Gallery of NSW. What might have been yet another AGNSW holding operation, built around Anita and Luca Belgiorno-Nettis' extraordinary gift of Kentridge's eight-channel video installation, I am not me, the horse is not mine (2008), has been transformed into an impressive survey. For this we have to thank the Naomi Milgrom Foundation, which not only contributed three-quarters of the work in the show, but paid for almost everything. 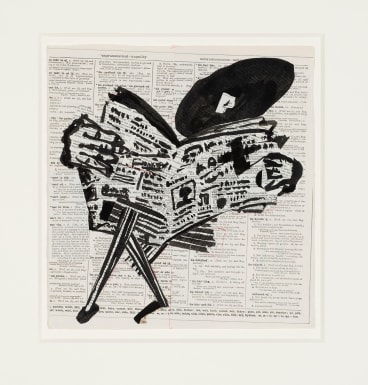 It's mildly alarming that private money can bring about such a transformation in the way a gallery operates. Pragmatically speaking, it's the way of the future, as governments try to shift the burden of cultural funding onto the private sector.

Some argue that the rise of the private donor threatens the independence of public institutions. This need not be the case if institutions are strong enough (and cashed-up enough) to impose limits on what benefactors may expect. In this instance the contribution of the Milgrom Foundation has been all to the good, but it's easy to imagine more ambiguous scenarios.

My chief concern about governments abandoning the arts is a philosophical one. If there is not an implicit recognition of the value of cultural activity to a society, the most blatantly commercial and superficial forms of entertainment will soon become the new norm. 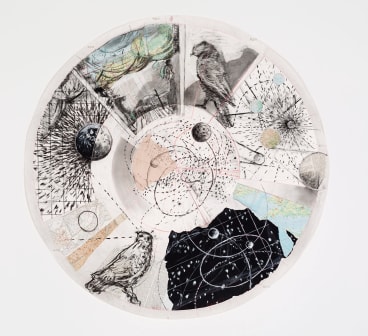 There must be standards that transcend, and even resist the idea that commercial value equals cultural value. What we see instead is a flagrant surrender to commercial interests, as shown by the state government's determination to sell the Powerhouse Museum site to developers, and to use the Opera House to advertise a horse race. Disgraceful doesn't begin to describe it.

In the context of Kentridge's work I trust this isn't too much of a digression because there is no artist in the world today with a greater awareness of the complex interweavings of history and culture.

Within the past four years Kentridge has masterminded four projects requiring hundreds of collaborators: both Alban Berg operas, Wozzeck and Lulu; an installation along the banks of the Tiber in Rome, called Triumphs and Laments; and a multi-media extravaganza about African porters in World War I, The Head and the Load, for Tate Modern, London.

The creative offshoots of these projects may be viewed at Annandale Galleries, in the show, Right Into Her Arms (until December 8), and at the Opera House in January, when Wozzeck comes to Sydney. The AGNSW exhibition acts as a bridge between the Kentridge survey held at the Australian Centre for the Moving Image in Melbourne, in 2012, and the work at Annandale Galleries.

That Which We Do Not Remember begins with a large woodcut collage that reproduces an image from Triumphs and Laments, of an imposing black square being transported on a rickety-looking railway carriage. That square, used to fill a gap in the Tiber sequence, is Kentridge's acknowledgement of all things that are forgotten – both involuntarily, and in the Nietzschean sense, wilfully; all the things that have been censored or erased from the historical record. Some things are too uncomfortable to be remembered, others too inconvenient.

What follows is an extended meditation on the creative process, as we travel from a schematic recreation of the artist's studio (complete with a diagram of how he walks around in preparation for beginning a drawing), to large, multi-layered installations such as I am not me, and the 2003 piece, Seven Fragments for Georges Melies: Day for Night and Journey to the Moon.

Melies was one of the pioneers of the cinema but also an old-fashioned conjurer who combined live special effects with his screenings. Kentridge pays homage in sequences in which he runs films backwards and in negative. His greatest feat was to get a group of ants to make a drawing by clustering on dribbles of sugar water applied to paper. In negative the ants become a constellation of tiny white stars moving in a pitch-black sky.

I am not me, a compendium of imagery drawn from the Russian Revolution and the era of Stalin, was the undoubted highlight of the 2008 Sydney Biennale. Kentridge's starting point was Gogol's short story, The Nose, and Shostakovich's opera based on the tale. In directing a production of this opera Kentridge found himself drawn into the labyrinth of Russian history, from the utopian fantasies of Vladimir Tatlin to Stalin's show trials.

Inevitably those trials made Kentridge think of the truth commissions that followed the end of apartheid in his own country, in which genuine crimes were effectively forgiven. It's become the artist's habit to run the film of history both forwards and backwards in his mind, seeking unexpected associations.

With his work on Mozart's The Magic Flute, also featured in this show, Kentridge reflects on how the glories of the Enlightenment led to the evils of colonialism. The political dimension isn't introduced like a slogan but allowed to emerge from the unfolding of ideas and images, sculptured, as it were, by time.

Most so-called political art is hardly better than propaganda in the way it denies complexity and contradiction. Kentridge's achievement is to embrace complexity at every turn, creating works of encyclopaedic scope that stimulate rather than stymie the viewer's imagination. Despite his preference for charcoal and ink on paper, the world he creates is many shades more colourful than what we see on TV.

William Kentridge: That Which We Do Not Remember is at the Art Gallery of NSW until February 3.