A woman who escaped a violent relationship was inspired to help others fleeing domestic abuse without their belongings, by launching a capsule wardrobe enterprise.

Rachael Bews, 26, a marketer from Ross-Shire, founded ALICAS after she accessed Women’s Aid services for domestic abuse survivors and saw the clothing being offered to women who have fled violent situations.

She wanted to do more for those who were starting their lives over with nothing but the clothes on their back by providing them with smart, new items to help boost their confidence.

The ALICAS parcel provides a 30-piece collection of wardrobe staples including new shoes, coats, dresses, skirts, trousers, tops, tights, socks and underwear to help women dress with dignity as they seek employment and take their children to school.

The first ALICAS parcel was delivered to a 19-year-old domestic abuse survivor in Scotland this summer and the aim is to distribute 300 more in the coming months, containing donations from the public and unsold clothing from fashion brands.

The service also provides a sustainable solution to one of fashion’s most pressing environmental issues, as half of new clothing in the UK is sent to to landfill or incineration, costing retailers more than £60bn each year. 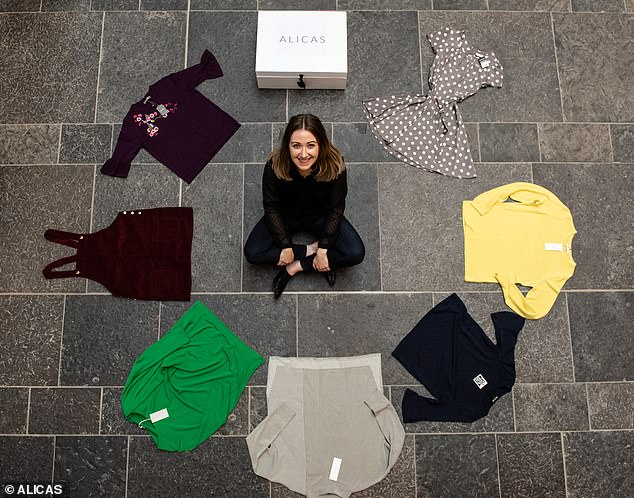 Rachael Bews, 26, from Ross-Shire, founded ALICAS after accessing the services and support available for domestic abuse survivors and wanted to do more to help others dress with dignity

Rachael, who studied business and marketing at university, found herself in a violent relationship during a year spent teaching abroad in Italy.

She fled back home to her parents in Ross-Shire, Scotland in February 2017 and sought help from her local Women’s Aid.

At the local centre, she found herself in a room with a pile of bin bags in the corner filled with donated, second-hand clothes which would be offered to fellow survivors of domestic abuse who had left everything they own behind in flight from their situation.

‘I was lucky that I managed to take most of my belongings with me,’ she explained.

‘But many women will have left everything behind and will have been faced with this bin bag of old clothes, and would probably feel that that’s all she was worth.

‘That bin bag of old clothes probably wasn’t going to do much to help that woman retain her sense of self-worth or her self-esteem.’

Rachael started researching projects that could help women access good quality clothing, and felt that she could do more to help the clothing crisis. 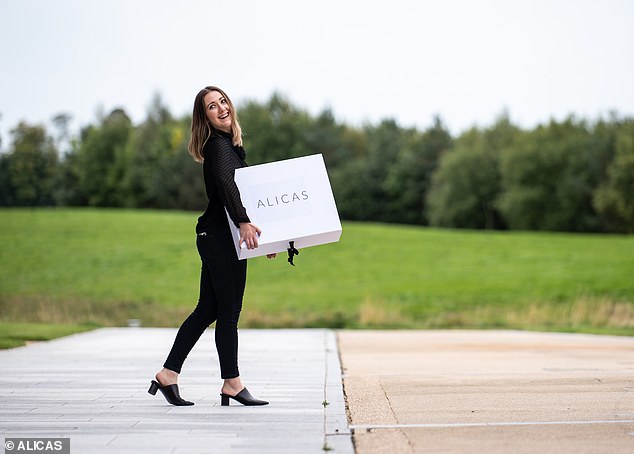 Rachael was reminded of a survivor and an old friend, Alison Grant, whom she had met when she was 18 and who had also fled her abuser.

What is an ALICAS parcel?

Beautifully packaged and complete with a hand-written note of support and solidarity, ALICAS parcels are gifts, not hand-outs, and as such are designed to help survivors retain their dignity, identity and confidence.

Each wardrobe is suited to size, style, and religious or cultural needs.

Those keen to support ALICAS do so by making donations and through its product range, including t-shirts, totes, cushions, sweatshirts and mugs.

By purchasing an item from ALICAS’ sustainable merchandise collection, conscious consumers will contribute towards the cost of picking, packing and distributing each parcel – enabling supporters to ‘buy a t-shirt, and gift a wardrobe.’

Ali, who is originally from the north east of England, had fled with nothing but the clothes on her back to Inverness in 2007, with her three young children.

Ali had told Rachael that her aunt had gifted her a good coat and a pair of shoes, and as long as she had her ‘suit of armour’ she could take her children to school and apply for work with dignity as she rebuilt her life.

‘I remember it really striking me at the time. I’m fortunate that I’ve always had a good coat and a good pair of shoes,’ she recalled.

‘To be honest at that point in my life I had never really thought about those two humble garments.’

The stark reality of that was etched in Rachael’s memory, and years later, it is Ali’s Coat and Shoes, which provides the inspiration for her innovative start-up, ALICAS.

‘The donations to the Women’s Aid were often of poor quality, they didn’t fit properly or they’d been sat in the loft and many groups faced the same issues across the country,’ she explained.

Rachael was recently put back in touch with her old friend and is set to reunite with her to discuss ALICAS. 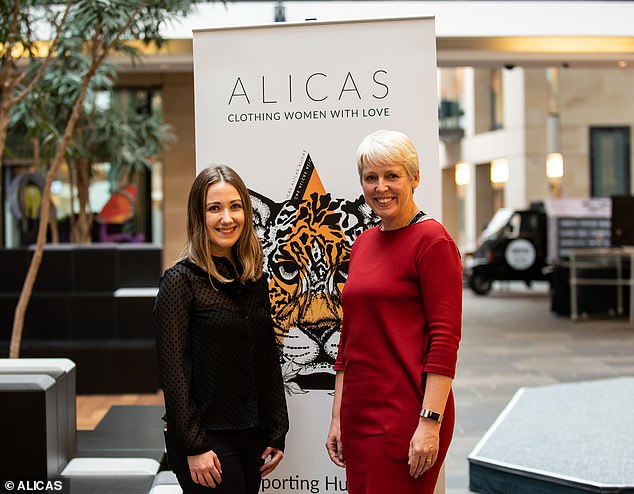 Rachael most recently launched her pilot scheme TAGSTO10K​ which aims to source 10,000 items to create 300 packages for women across the UK in need of clothing to help start their lives over

ALICAS who recently launched their TAGSTO10K project with the aim of encouraging the public and retailers to donate 10,000 unused items with the labels on make 300 clothing packs to give to women in crisis.

Clothing has already been gifted by Navabi, a premium plus size brand retailer.

Supported by Scottish Women’s Aid and Shakti, who will distribute the parcels through referrals from their local support workers for domestic abuse survivors.

Rachael explained at the launch of TAGSTO10K: ‘With leading global fashion retailers looking for ways to avert environmental damage as they incinerate or landfill millions of pounds of unused stock, the opportunity to create a virtuous circle between the two needs was clear.

‘With the first capsule wardrobe already delivered and supporting a Scottish survivor of domestic abuse, we are determined to build on this with more responsible retail partners joining our movement to cloth women with love.’

Rachael’s enterprise is currently based in Edinburgh but her long-term plan is to make the concept sustainable for different communities to launch across the UK.

She has already received start-up backing from the Royal Bank of Scotland Entrepreneur Accelerator; The Royal Society of Edinburgh, The Hunter Foundation; Scottish Institute for Enterprise; The University of the Highlands and Islands and UnLtd.