Woman fat-shamed by boyfriend gets revenge by shedding four stone

A size 16 woman who was fat-shamed by her boyfriend has got revenge by losing four stone – and becoming a British bikini bodybuilding finalist.

Emily de Luzy, 24, from Horsham, West Sussex, revealed how her boyfriend told her that he made sure she was properly fed because ‘the fatter [she] got the less people would look at [her]’.

Emily, who previously weighed  12st 8lb, described how she used to hide her body away, after years of comfort eating.

She decided she wanted to transform her relationship with her body by overhauling her fitness regime, and now weighs 9st 2lbs and is a UK size 8. 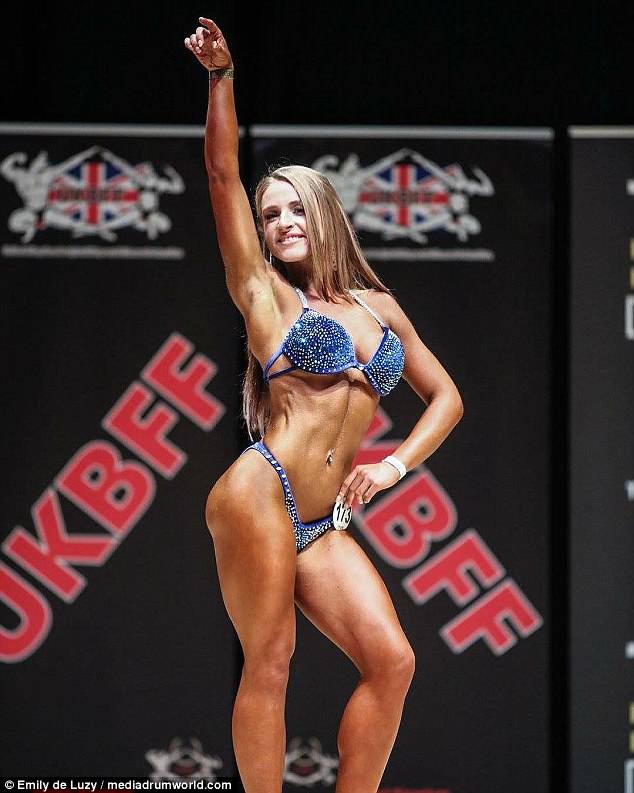 Emily de Luzy, 24, from Horsham, West Sussex, (pictured after her weight loss) revealed how she has lost four stone to become a bikini bodybuilder

Emily, who previously weighed 12st 8lb, (pictured before her weight loss) revealed how she was fat-shamed by an ex boyfriend

Emily explained how her ex-boyfriend used to openly fat-shame her before her weight loss transformation.

‘I had a boyfriend who shamed me for my weight and openly admitted to me that throughout our relationship he fed me up deliberately because the fatter I got the less people would look at me,’ she said.

She added that she was also bullied at school over her weight, as well as being shamed in the gym.

‘I was out of shape before and I was so determined to prove the school bullies and people who had shamed me for my weight that I could get in great shape,’ Emily said. 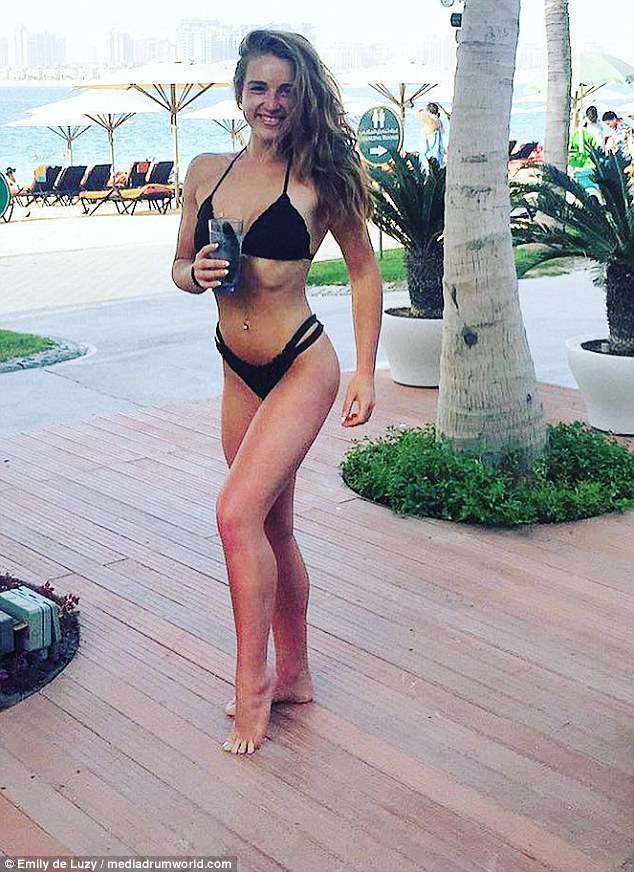 The fitness fanatic now weighs 9st 2lbs and is a UK size 8, after overhauling her fitness regime

Emily (pictured after her transformation) described how she decided to overhaul her fitness regime, after realising she wanted to change her relationship with her body

‘I got called names in the gym when I was running on the treadmill at the beginning of my weight loss journey – I was always known as the chubby one.

‘When I went on holiday with my friends, to get into the pool I used to get them to pretend to push me clothed so I didn’t have to undress down into just my swimsuit.

‘I didn’t have a relationship with my body before, we didn’t work as a team. I would hide my body from the world and even from myself, mirrors were my worst nightmare and baggy clothes my best friend.’

Emily explained how she began her transformation at 19, after coming to ‘terms with the fact that I was overweight, unfit and was using food to tackle my emotions’.

She decided that she would overhaul her fitness regime, as well as getting rid of her bad eating habits. 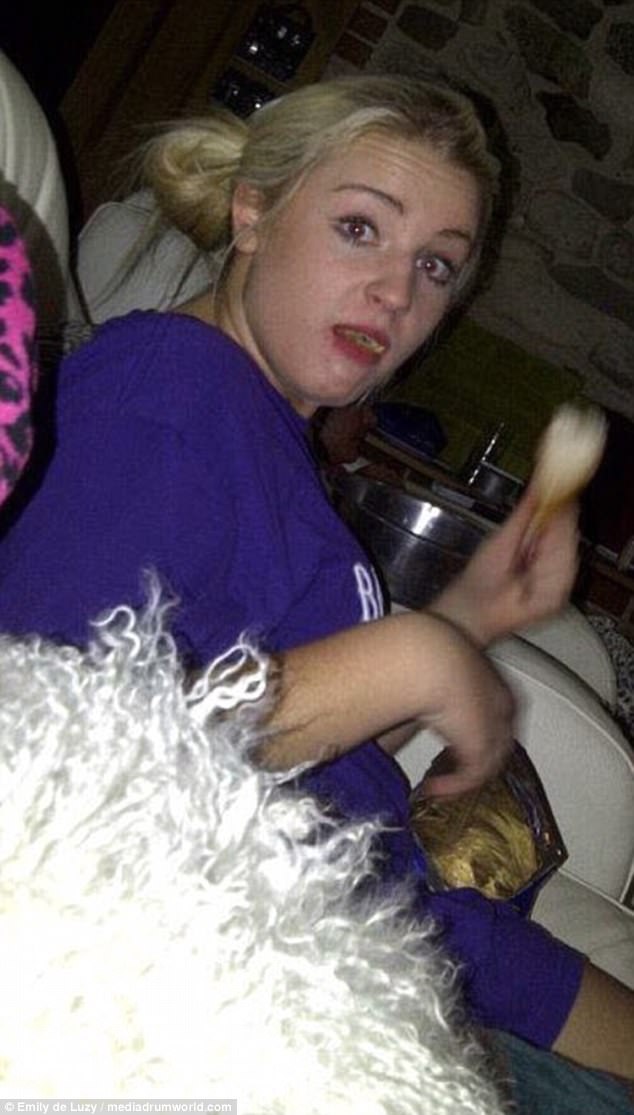 Emily (pictured before her weight loss) described how she used to hide her body away, after years of comfort eating

She said she was also bullied at school over her weight, as well as being shamed in the gym

‘I’ve lost five-stone, gone down four dress sizes and have gone through every emotion possible through trial and error of many diets, dealing with breaking habits and genuinely sticking at it to get to where I wanted to be,’ she said.

‘I decided to lose weight then to push it even further to compete as a bikini competitor and then sustain the physique I’ve always wanted.

‘Now that I worship, respect and love my body it allows me to run long distances, lift heavy weights and jump around in training classes. I am proud of the body I was born with now and I am no longer scared of mirrors nor fitted clothes.’

Explaining her new fitness regime, she said:  ‘I tend to train in the gym four times per week which includes one to two hours of weight training or a functional session including a mix of resistance-based exercises and high intensity cardio.

‘My calories vary depending on my week and if I am dieting for shows. Right now, I am currently eating 2000 calories plus per day and I still get hungry. 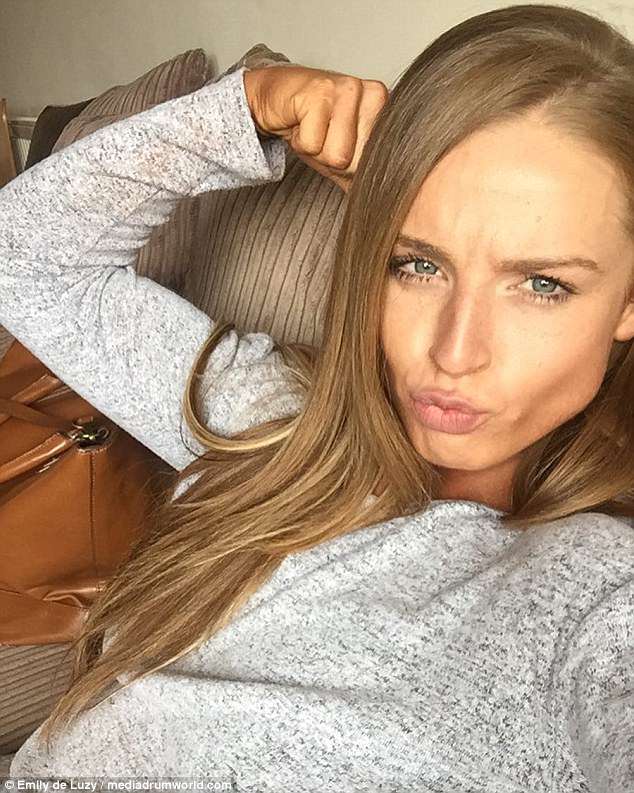 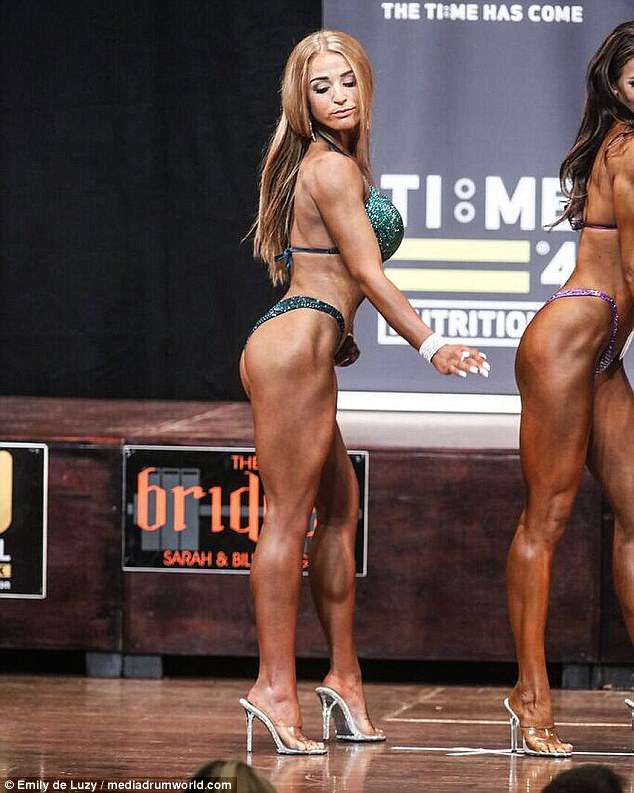 ‘Calories and food are our friends and I see way too many diets going around which include such low calories, our bodies aren’t designed to live off restricted calories especially if we want to build some muscle and have a toned, balanced physique.

‘My calories come from good food sources and provide me with all the nutrients I need to fuel me for my week both mentally and physically.

‘You hit some serious lows and some serious highs, you push your mind and body in ways it has not been pushed before.

‘You have to put up with being hungry and over worked and you have to love your soul and your body before you begin to start dieting for any show.’

Emily also explained how social media has had a role to play in her impressive transformation. 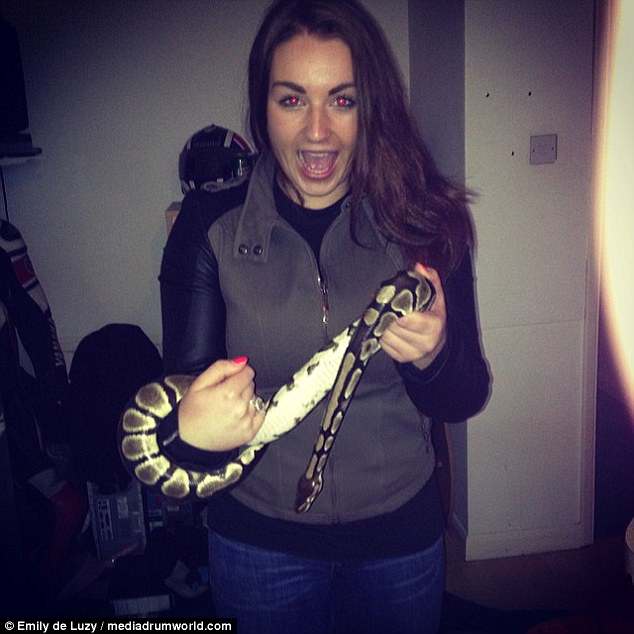 ‘I started my Instagram account as it allowed me to communicate with like-minded people and it also spurred me on to keep going as I would write posts informing my followers of my plans,’ she said.

‘For instance, I once announced that I was going booze free for three months and I swear to this day that because of that and promising others I didn’t have a sip for a whole three months.

‘Posting my journey via social media has definitely enhanced opportunities for me. I’ve managed to connect with people from all over the world and now have a great platform to speak to people in the same position I was before I started my weight loss journey.

‘A lot of people ask me how I do it and I’m always honoured when people do ask and always try to encourage and advise others if they show an interest in my journey.

‘I’ve had some bad reactions too, mostly from people who don’t understand nor want to understand why I go to the gym and why I eat clean and healthy. Normally this is from people that from the outside looking in aren’t overly happy with themselves. 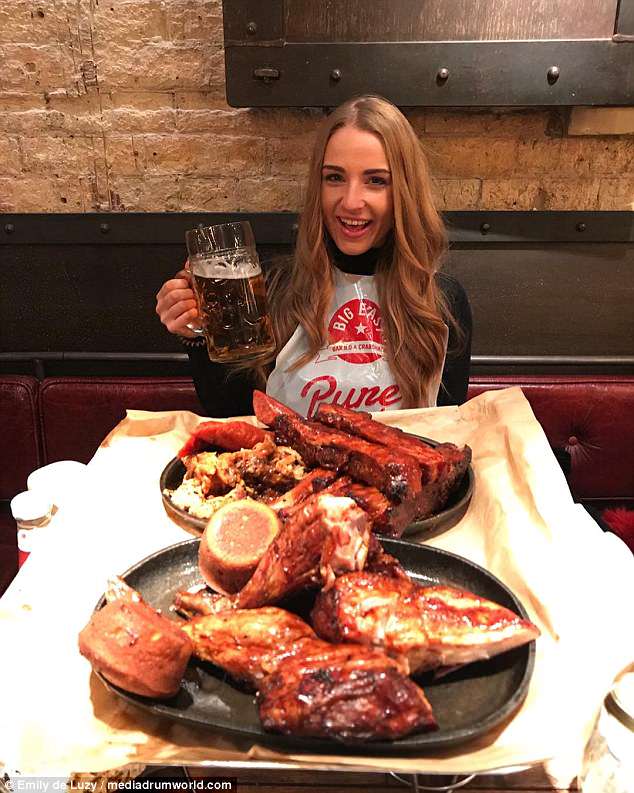 Emily (pictured after her transformation) still treats herself to an indulgent meal, despite overhauling her diet

‘In all honesty I only surround myself with positive and supportive people and this is one thing I’m incredibly strict on, no one needs bad eggs in their lives, so I make sure I have none in mine.’

Finally, Emily had some advice for anyone else just beginning or wanting to start on their own weight loss adventure.

‘Whatever goal you have in your mind I can tell you, you will achieve it. It may take time and you may experience hiccups along the way because we’re all human and anything worth having doesn’t come easily,’ she said.

‘If fitness is new to you and you feel a little lost as to where to start; invest your time, trust and money in a coach that can mentor you through your journey and eliminate potential hazards that can appear throughout transforming your body.

‘Set some clear goals and go and smash them, try to remember where you started because every individual day you complete trying to better your lifestyle is another day ahead from where you began.

‘Most importantly do not forget to congratulate yourself for every small milestone you achieve throughout your journey.’