Woman who lost 16.5 stone is told she’s too slim for saggy skin op

‘Life trapped in this awful body is horrible’: NHS tells mother who shed 16-and-a-half stone that she must put weight BACK ON to qualify for surgery to remove her saggy skin – and she says the stress has triggered anorexia

A mother-of-three has revealed how she’s been told she’ll only qualify for surgery to remove an apron of excess skin caused by extreme weight loss if she piles the pounds back on.

Former debt collector Lisa Smith, 44, from St Helens, Merseyside, once tipped the scales at 28 stone but was advised to ‘diet or die’ after a traumatic birth left her with diabetes-related heart failure.

Despite since shedding a huge 16-and-a-half stone, Smith has been told she has to live with the loose skin around her abdomen or pay privately for an operation to remove it – despite being told previously she would qualify for surgery if she could reach a certain weight.

Now, she’s been told she can  qualify for weight loss surgery because she’s diabetic – but she needs to be fatter again.

Lisa is speaking out because she says she doesn’t want to ‘abuse the system’ and see ‘tax payers money wasted’ on an operation she does not need having lost the weight herself. 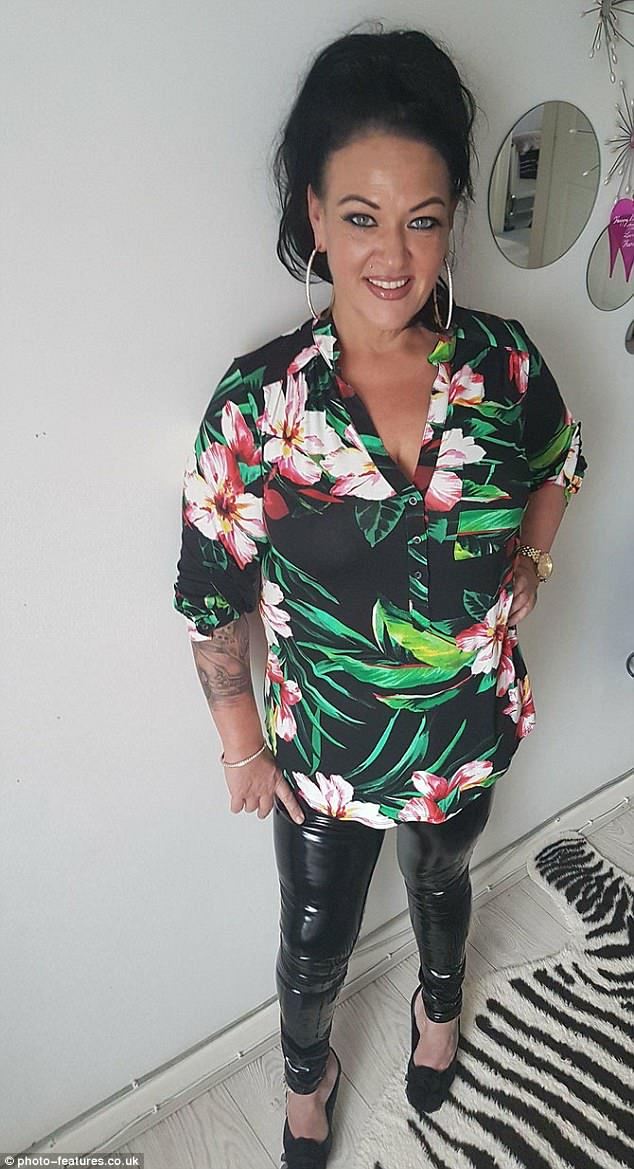 Lisa Smith, a former debt collector from St Helens, has shed 16-and-a-half stone after being told to ‘diet or die’. However, now she’s lost weight, she still doesn’t qualify for NHS funding to have the saggy skin that she’s been left with removed 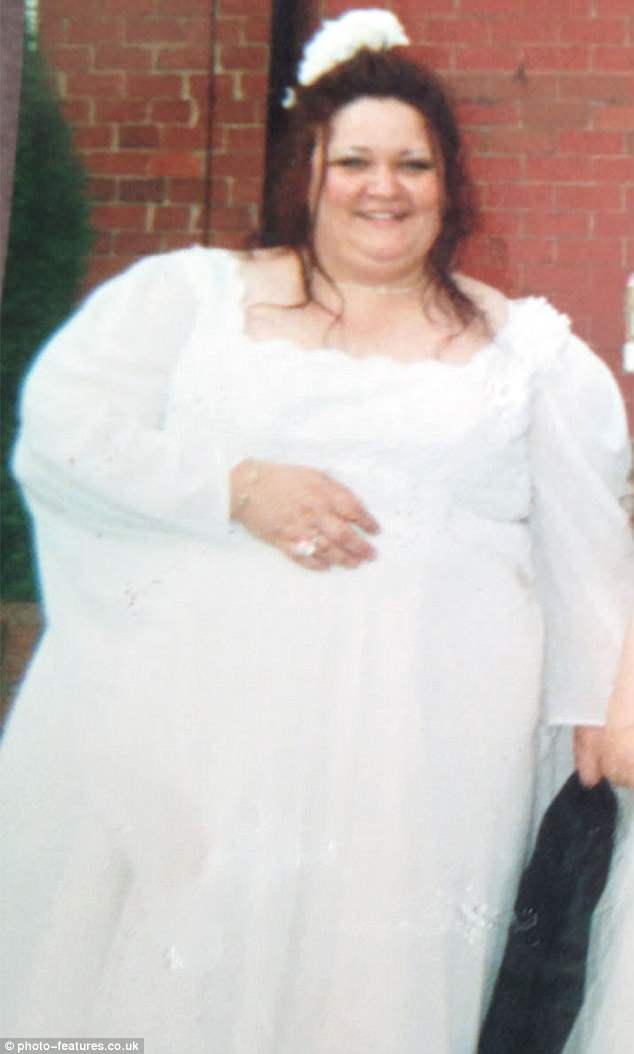 Lisa says being trapped in a body that looks like a ‘melted candle’ is worse than being fat. Lisa pictured above weighing in excess of 20 stone 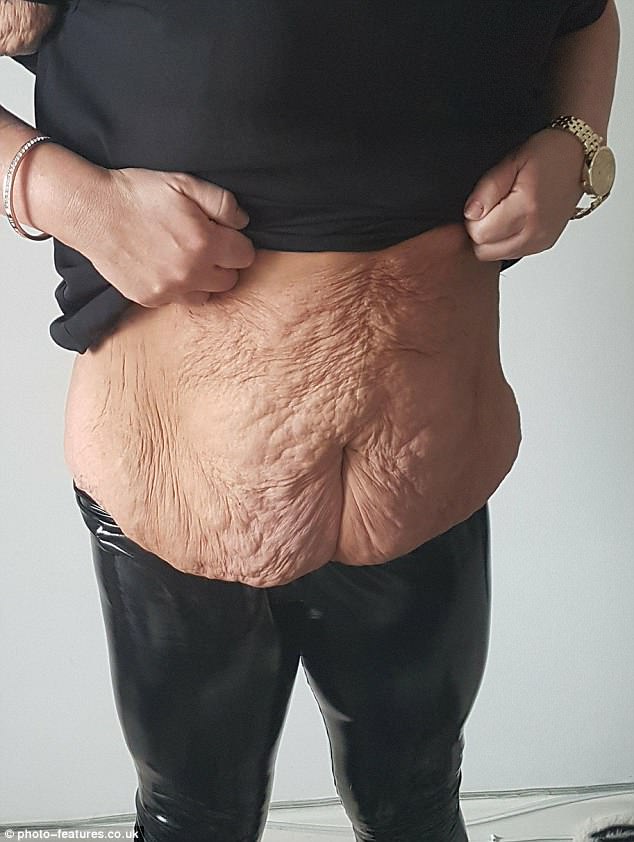 Loose skin: Lisa, who has previously lost six babies, says she was determined to slim down from her 28-stone frame but says the NHS has moved the goalposts when it comes to funding for a skin removal operation

She says slimming to meet criteria for NHS skin surgery has left her suffering with anorexia and bulimia.

Lisa adds that the experience has left her so stressed that at one point she stopped taking her insulin because it made her gain weight – despite her life depending on it.

Despite getting her BMI down from 70 to 29, she is living in fear that she could die at anytime because of the strain on her body caused by the eating disorders.

Lisa said: ‘I’m just trapped in the most ridiculous situation. I lost more than 16-and-a-half stone myself through healthy eating but my health is worse than ever.

‘I was told to lose more weight to get funding which triggered anorexia and bulimia – and now that I’ve done that I’ve been told there is still no funding so my best chance would be to put the weight on again and have NHS weight loss surgery which I would get because of my diabetes.’

Lisa rages: ‘It’s such a joke. That would cost the NHS even more money than just funding the skin removal. But I can’t work to pay for the operation myself because of the diabetes so I’m in a catch 22 situation.’

‘All I know is I can’t go on living like this and I’m worried my ten-year-old son will find me dead. Life trapped in this awful body is horrible. I just want a chance to get my life back on track after working so hard to lose weight.’

Lisa says her weight gain was originally caused by gestational diabetes in pregnancy. Abuse of the system: Lisa says the way NHS is currently set up she could gain weight just to get an operation, despite being capable of losing the pounds with exercise and healthy eating Lisa as she was before the weight loss: She says her drastic weight gain – once weighing 28 stone -was caused by gestational diabetes in pregnancy. Shortly after her son was born in 2008, she was diagnosed with diabetes-related heart failure and advised to lose weight Now, Lisa has been advised that the only way to access surgery to rid her body of the loose skin she loathes on the NHS is to put weight on again 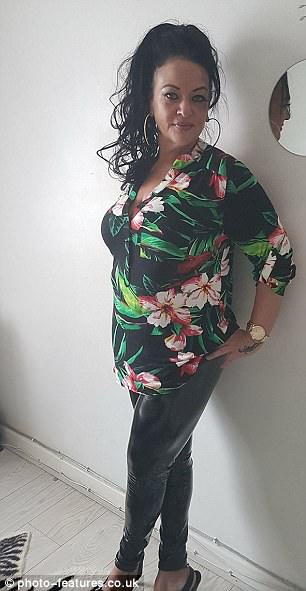 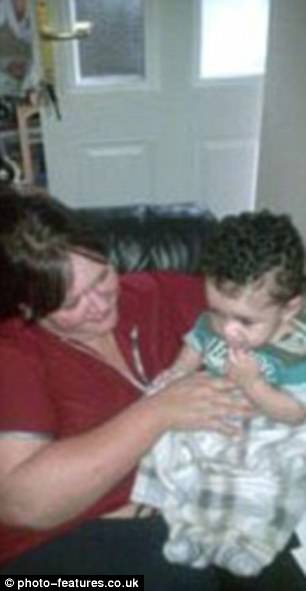 Lisa says that the experience of reducing her body weight so dramatically has triggered eating disorders. Right: Lisa with son, now ten. Doctors told her medicine for her diabetes might work if she lost weight which began her dieting journey

She had to inject insulin daily after losing six babies previously – but her weight quickly soared. She was a size 36 to 38 by the time her son, now ten, was born in 2008. Her BMI was 70.

After the birth Lisa was kept in hospital with suspected asthma. But after doctors ran tests to find out why she was so breathless and weak they discovered that she had diabetes-related heart failure which was complicated by her weight.

She was told she might have just weeks to live and a priest was even called to read her the last rites.

Lisa said: ‘They thought I wouldn’t make it out of the hospital alive, I was in shock. I’d just had a baby and was facing death.’

Doctors said medication had a chance of working if she lost weight.

Lisa said: ‘Basically it was diet or die. I had a newborn and two other children so of course I knew I had to diet to stay alive for them.’

Lisa stuck rigidly to a healthy eating plan and the weight fell off quickly.

She said: ‘ I started to feel like my old self again. I felt very lucky to be alive and determined to get healthy and get back to work.’

Her success on the scales was astonishing but at the same time Lisa also began to notice the unsightly skin on her stomach that got worse the more weight she lost.

She says: ‘I kept hoping it would improve but it only got worse. I saw my GP who indicated that when I had reached a healthy BMI I could be referred for skin removal.

‘It’s offered routinely to people who lose eight with gastric bands on the NHS so I felt that having lost the weight myself I would qualify.’

That thought kept her going until she had lost a staggering 16 stone and reached a size 8. 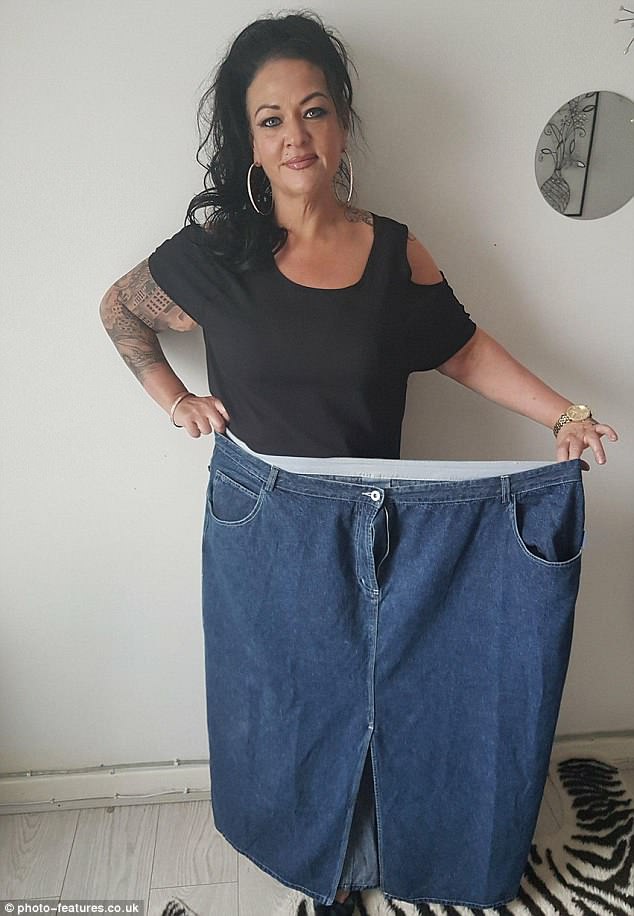 However, by then her skin was causing major confidence issues.

She says: ‘I tried dating but men just recoiled in horror or laughed. I looked like a melted candle.’

She started to avoid going out and suffered with anxiety.

Only last September when Lisa went back to the GP she was told her BMI at 30 was still too high.

She said: ‘I had no weight to lose, it was just skin but nobody would listen. I was that small dieting stopped working which is when I started missing meals and vomiting up food.’

But the scales still stalled – because the weight was the skin not fat – so in an extreme attempt to lose more weight she started missing her insulin.

Lisa says: ‘ I was so desperate to meet the criteria I would have done anything.’

She was surviving on just 500 calories a day when she went back to the GP last month. She said: ‘My BMI was now 29 and I was down to 11 stone 10 pounds, but this time I was told there was still no funding so I’d done it all for nothing. 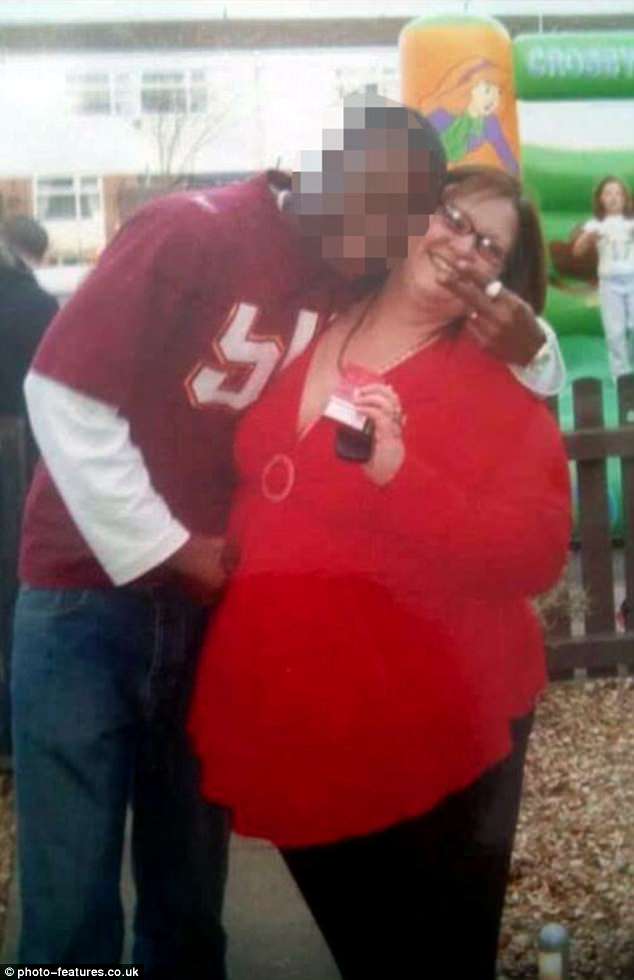 Why bother? Lisa says the NHS basically is encouraging men and women not to bother losing weight because they know they’ll be left with a huge amount of loose skin they can’t afford to get rid of at the end

‘My head was in a mess, I’d made myself bulimic and anorexic trying to qualify only to be told best chance I had was to put the weight back on and have NHS surgery to lose it again.

‘I’d qualify for NHS gastric surgery because of my diabetes and then I’d get skin removal too.

The ‘totally distraught’ mother said she’s trapped in a ‘living hell’ and her diabetes won’t improve while she’s in so much stress and discomfort.

She says: ‘I’ve gone from obese to bulimic trying to qualify for this operation, only to now be told the only way is to put the weight back on.

‘The system is basically going to force men and women to not bother trying to lose weight themselves because they know they’ll get no help with the skin at the end.

‘Instead they’ll turn to NHS weight loss surgery because that is the only way to get funding for skin surgery. ‘That is going to put even more of a drain on funding. Where’s the sense in that?’