Woman preparing for her first Christmas without her husband and kids

Mother who survived the car crash that killed her husband, son, 14, and daughter, six, urges parents to cherish their children and says: ‘I didn’t know it would be the last time I’d say “I love you”‘

A mother who is preparing for her first Christmas following the death of her husband and two children earlier this year, has urged others to cherish every moment with their loved ones.

Geraldine Mullan, 45, from Moville, County Donegal, was the only survivor of a car accident at Lough Foyle in Donegal, Ireland, which killed her husband John, 49, and children Tomás, 14, and Amelia, six in August.

Speaking to Miriam O’Callaghan on RTÉ’s Prime Time she urged viewers to tell their cherish their loved ones.

‘I can’t turn back the clock, I wish it could be the 19th August and things were different. But I can’t change what happened on the 20th August,’ she said.

‘But in some small way, especially as we’re coming up to this Christmas yule season, my Christmas present to John, Tomas and Amelia is that more kids get hugs and kisses from their mums and dads. 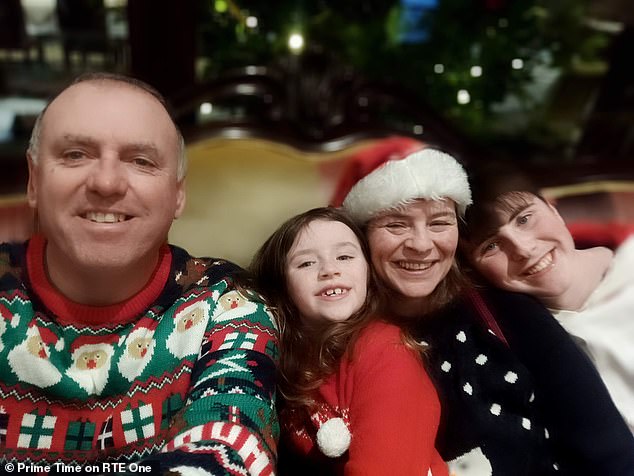 Geraldine Mullan, 45, from Moville, County Donegal, has urged people to make the most of time with their loved ones, following the death of her husband and children. Pictured: Geraldine with husband John, 49, and children Tomás, 14, and Amelia, six 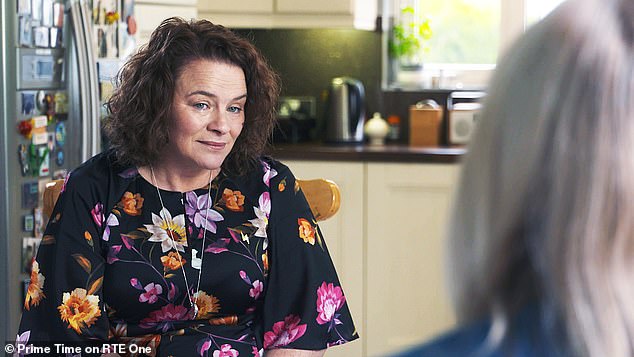 Geraldine (pictured on RTE this week) managed to free herself from the wreckage and call for help, after John lost control of their vehicle 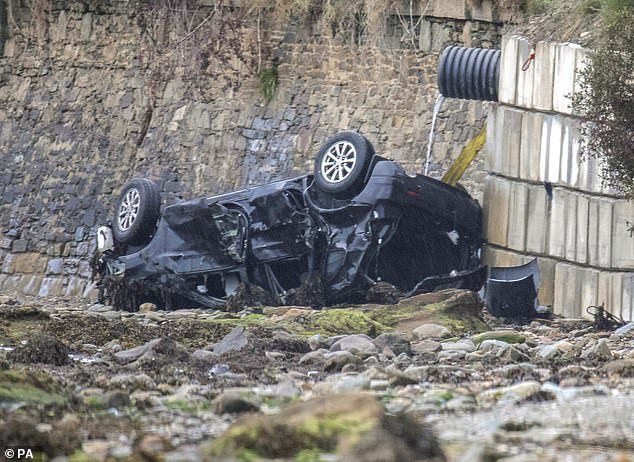 Geraldine Mullan, 45, is the sole survivor of the tragic accident that killed her husband and two children after their car plunged off the road into Lough Foyle near Quigley’s Point in Donegal

‘If more people tell their loved ones that they love each other. I didn’t know that the 20th of August was going to be the last day I got to tell John, Tomas and Amelia that I love them.’

The family were returning from an evening out at nearby Londonderry, when John lost control of the car he was driving at around 10.20pm.

Their car skidded down an embankment into water, with Geraldine managing to free herself and raise the alarm.

She revealed Tomas was found with his arms around his little sister, while paying tribute to her family at their funeral and told how she had hidden presents around their home ahead of John’s birthday.

The grieving mother appeared on Prime Time on RTE One to thank the emergency services who responded to the accident and those who’ve offered their support since the tragedy. 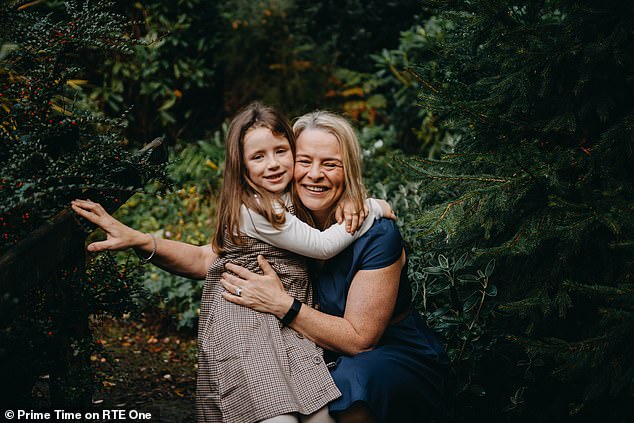 Geraldine told Miriam O’Callaghan of RTE One that the family had enjoyed a day full of fun and laughter before the accident. Pictured: Geraldine and Amelia 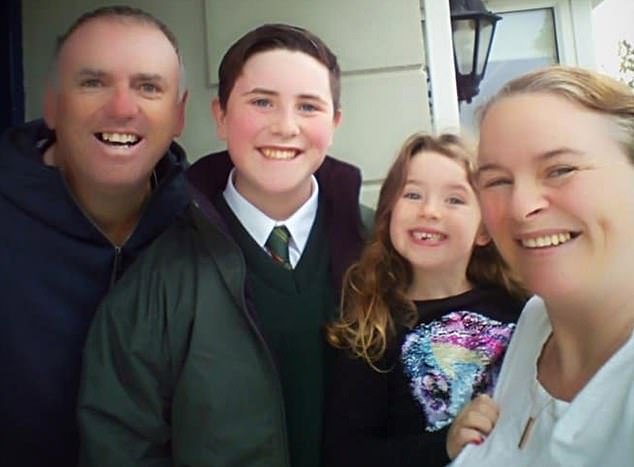 Geraldine said no one should have to tell someone that their family has died. Pictured: Geraldine with her husband and children 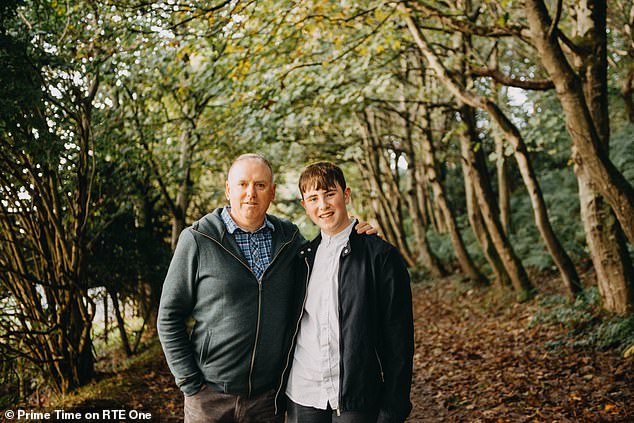 The grieving mother said their home was eerily quite after the accident and saying goodbye to her family meant everything to her. Pictured: John and Tomas

‘So in the morning we were just going around getting a few jobs done. Getting the crest on Amelia’s uniform, getting Tomas’s school uniform and had a lovely lunch then headed on in for a beautiful family day out.’

The nurse said they went bowling and watched a movie for a day full of fun, laughter, and love that she didn’t know would be their last together – but she wouldn’t have changed anything about it.

Geraldine said she tries to remember their smiles and laughter from their final day together.

She added that no one should have to break the news that a family has died and she’s grateful for how responses to the scene looked after her.

‘When they were bringing me to John, Tomas and Amelia they stood in unity and it was heartbreaking. My heart broke that night,’ Geraldine said. 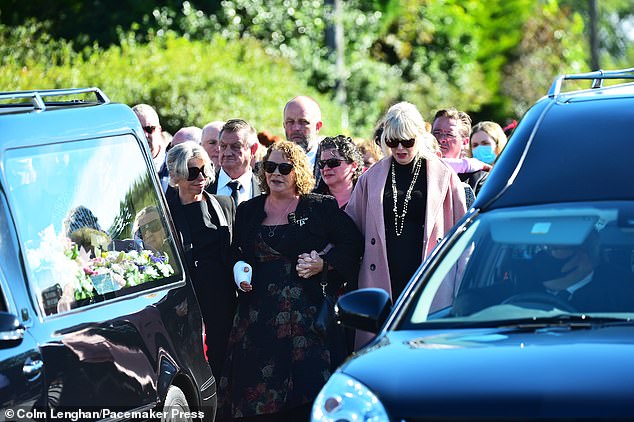 Geraldine and her family had been returning from a family day out when their car skidded down an embankment. Pictured: Geraldine at the funeral of John, Tomas and Amelia Mullan at St Pius X Parish Church in Moville

The grieving mother admits she had lost hope when the coastguard stayed in the water, but she did want to be close to her family.

Tearful, Geraldine continued: ‘He held on to me and kept apologising because he knew they were gone too and kept saying “I am so sorry Geraldine, I can’t let you go”.

‘I am here today because of Kevin and all those people who worked so hard to get me out of the water. That’s why my dad refers to all of them in unison as my guardian angels.’

‘The fact I got to see them, got to kiss them one more time, got to say goodbye to them that meant everything to me because I know they’re no longer here anymore.

‘When it’s my time to go, they’ll be there waiting for me. so, for now it’s just goodbye.’

Geraldine explained it was eerily quiet to return home after their deaths and it’s been hard to go into her children’s bedrooms, revealing Amelia’s bag is still on her bed.

She said: ‘John’s was suppose to be 50 two weeks after the accident, so one of the presents myself and the kids had organised was 50 photos.

‘Unfortunately John didn’t get to see them but the kids had picked them out their favourites. Each photograph tells a story, that will bring me back to a moment in time. So when I am struggling and when I’m finding the days difficult, I can just look at the photograph and remember the smile coming out of the photo.’

Geraldine added she still has hope, saying: ‘I take one day at a time, sometimes it’s an hour at a time, but I will never lose hope Miriam, as I said John, Tomás and Amelia may not physically be with me but they’re definitely with me in spirit, they’re in my heart.

‘And that’s where they will forever stay. I’ll love them for the rest of my days. You know, I tell them every day still I love them and I always will, you know, so I will never give up hope.’