‘You may not get it, but you get me’: Woman’s list of things her boyfriend can do to help her during an anxiety attack goes viral after she tweeted it to help others who ‘need guidance’

A woman who suffers from extreme panic attacks and anxiety has revealed how she helped her boyfriend understand her condition.

Kelsey Darragh, 27, who is a Development Partner at Buzzfeed, as well as an actress and comedian from Tampa, Florida who is now based in Los Angeles, took to Twitter to share a handwritten list of tips she wrote out for her boyfriend.

The list which has since gone viral accompanied a tweet that read: ‘I have panic & anxiety disorder. My boyfriend does not… but wants to understand it so he can help me. SO I made him this list! Feel free to share w ur loved ones that need guidance!’ Help: Kelsey Darragh, 27, a Development Partner at Buzzfeed, shared a handwritten to-do list she made for her boyfriend (pictured) to reference when she’s having an anxiety attack 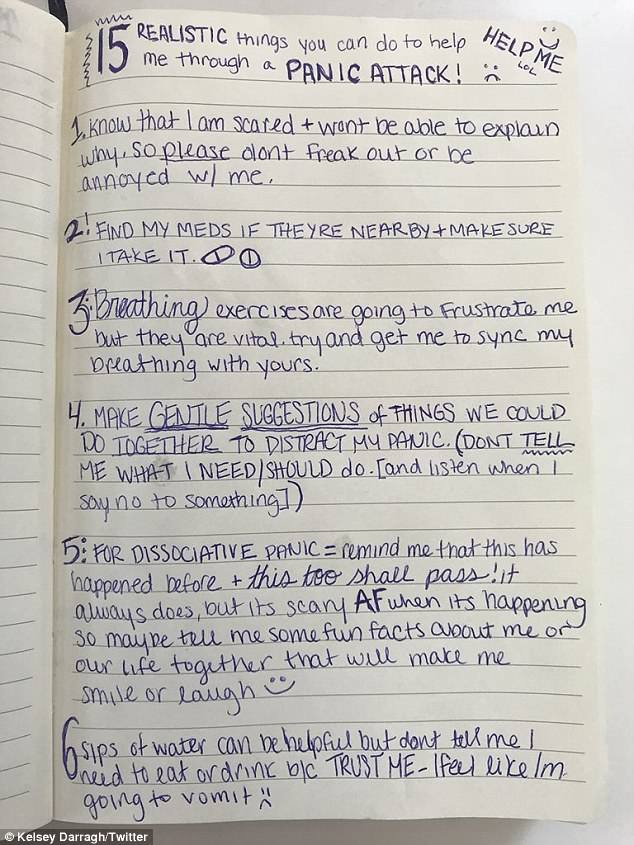 Viral: Containing 15 points, the LA resident revealed in the accompanying caption that she wrote out the list of tips for her boyfriend to try and help him ‘understand’ 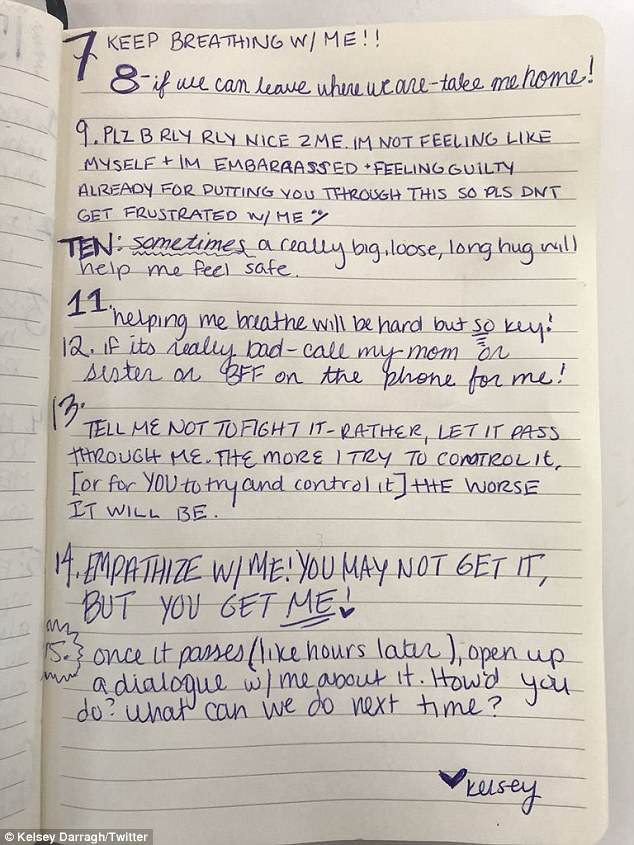 Don’t panic: The list which was written out in blue biro and spans two pages of a diary, lists the ‘realistic things’ her boyfriend can do to help when anxiety strikes

The list which was written out in blue biro and spans two pages of a diary, lists the ‘realistic things’ her boyfriend can do to help when anxiety strikes.

Tip number one reads: ‘Know that I am scared and won’t be able to explain why so please don’t freak out of be annoyed w/me’.

Next up she advised her boyfriend that he should find her medication and insist she takes it.

Moving onto her third point, Kelsey went into detail about breathing techniques and how important it is that her boyfriend tries to regulate her breathing during an attack.

‘Try and get me to sync my breathing with yours,’ she added.

For her fourth point, Kelsey shared that her boyfriend should ‘make gentle suggestions of things we could do together to distract my panic’ but emphasized that he should tell her what ‘I need/should do’.

Next up she addressed ‘dissociative panic’ which she described as ‘scary AF when it happens’ so asked her boyfriend if he could try and tell her some fun facts about herself or their life together in these instances.

For her sixth suggestion, Kelsey explained that her boyfriend should get her to take sips of water but to not force the issue as she usually feels like she’s ‘going to vomit’ when she’s having an attack.

For point number seven, she reiterated her point that he should ‘keep breathing’ with her.

And for number eight, Kelsey advised her boyfriend that if an attack should come on while out in public, he should take her home immediately.

Next up, Kelsey pleaded with her boyfriend to be ‘nice’ to her as she usually feels embarrassed and guilty after a panic attack.

For her tenth point, she asked her boyfriend to comfort her with a ‘really big, loose, long hug’ to help her feel ‘safe’.

In order to emphasize the importance of breathing, Kelsey again told her boyfriend in her eleventh point that he should keep helping her to breathe even though it will ‘be hard’ to do so.

Opinion: The tweet which has been lived over 21,000 times has also sparked several comments from others who suffer from anxiety attacks

Template: One psychotherapist shared that she had saved the list to show her clients so she could advise them to make their own

Common practice: One man shared that he also makes lists when he’s having an attack but his contain the names of ‘people who don’t hate me’

Following that, she advised him to call her mom, sister or best friend on the phone if it’s ‘really bad’ before asking her boyfriend to not tell her to ‘fight it’ and instead ‘let it pass through me’.

‘The more I try to control it (or for you to try and control it) the worse it will be,’ she added.

For her penultimate point, Kelsey asked her boyfriend to try and be empathetic and finally, she suggested that hours after the attack has passed, he should ‘open up a dialogue’ so they can discuss how he dealt with her panic attack.

Twitter user @tombydand shared that he had a similar tactic: ‘I get anxiety attacks not panic attacks but I’ve trained my self to make a list of people who don’t hate me. Going through the list takes my mind away from the overwhelming anxiety. Methodically list the good people who are there for you.’

While @Rez1124 wrote: ‘This is awesome kudos to your BF for wanting to know’.

A sentiment shared by @SFGiantsMeag who added: ‘It is huge that he wants to understand so he can help you’.

While @ideaman21 typed: ‘I’ve suffered from panic attacks for 24 years now. Your list is perfect. My Dad was my safe person, he had the knack to ask me questions that had nothing to do with what was happening right now. Really make me have to think. It worked for me.’