When Dr Christine Blasey Ford appeared before a US senate committee late last week to give testimony regarding the historical sexual assault she alleges to have suffered at the hands of Brett Kavanaugh, it was her immense dignity that left the most lasting impression.

With a measured voice that belied the memories she was being forced to relive, Dr Blasey was professional and controlled, repeatedly offering her apologies that she couldn’t be more helpful. 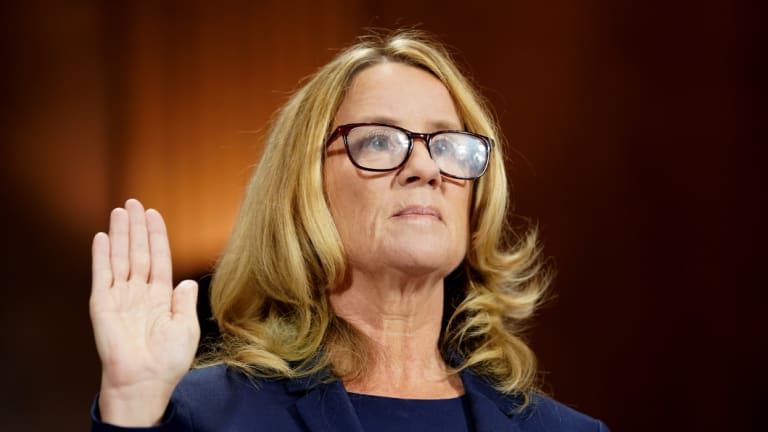 Christine Blasey Ford is sworn in during a Senate Judiciary Committee hearing in Washington, DC, on Thursday, September 27, 2018.

As it was, she described how she remembered Kavanaugh and his friend, Mark Judge, pinning her down on a bed in a secluded room and attempting to remove her clothes.

“Indelible in the hippocampus is the laughter,” she testified. “The uproarious laughter between the two [men] and their having fun at my expense.”

Perhaps Dr Blasey Ford would have liked to have been angrier. Goodness knows the millions of women watching that day (not just from within America but also around the world) felt that deep rumble of fury rip through us all, as scars we’ve held dormant across our own bodies and memories suddenly tore open once again and began to flood us with pain we thought we’d sealed away long ago.

But anger belongs to men, and so Dr Blasey Ford could not appear before the world and show what the rage of abuse and trauma really looks like. That was a privilege reserved for Brett Kavanaugh, like so many of the privileges he’s enjoyed before it.

The privilege, say, of being able to attend the kind of expensive, elite, all-boys school that looks good on an application to Yale Law, the school your grandfather graduated from. The privilege, also, of being able to drink beer – lots of beer, enough beer to get drunk and perhaps not even remember everything he did while in that state – but never be held responsible for any lack of "common sense" that occurred as a result of it. The privilege of growing up male in an era that explicitly represented sexual assault in popular movies as some kind of hilarious jape that red blooded young men get themselves involved in but never have to face the consequences for.

And, yes, the privilege of standing in front of a senate committee and behaving like a belligerent, petulant child and knowing with absolute certainty that this won’t impact his professional reputation in the slightest. Because anger belongs to men.

Only a few weeks before this senate hearing, Serena Williams showed what happens to women – particularly black women – who allow their fury to be unleashed. Disputing unfair treatment at the hands of a tennis umpire, Williams found herself being further penalised. She was angry. She had every right to be. She expressed that anger like so many of her male industry peers have done before her, many of them to greater degrees and with far less serious punishments. In response, racist cartoons were drawn depicting her anger as foul, grotesque, large and unseemly. She continues to be vilified by members of the public, who refer to her in terms like "spoilt", "childish" and "brat". Because anger belongs to men.

In a recent article for CBS News, journalist Rebecca Traister writes, “Women are taught that if we express anger, we will not be taken seriously. We will sound ‘childlike,’ ‘emotional,’ ‘unhinged,’ ‘hysterical.’ And so, many of us take immense care not to express our anger, lest we undercut the very point we want to make.”

Anger in women is pathologised as something foul and noxious. An angry woman is an unstable one, her rage never able to be understood as something correct and justifiable, only unwieldy and volatile.

In the not-too-distant past, angry women were institutionalised by husbands, fathers and brothers – men for whom women’s anger was seen as an inconvenience at best and an embarrassment at worst. They were institutionalised for other things, too. Being raped was one of them. Becoming pregnant out of wedlock another. Reading books, also a sin.

Why are you so angry? The angry woman is asked.

It is not a genuine enquiry, but a judgment.

Kavanaugh could spit and sputter his way through that hearing because anger belongs to men. If Dr Blasey Ford had shown a shred of his temperament, she would have been excoriated. Instead, she does exactly as she's supposed to – exactly as she's been trained, as a woman – and she can now suffer the other indignity reserved for us of being called confused.

Anger belongs to men, but women are masters at storing it. We can and should start using it again, despite what conditioning has taught us. Elizabeth Warren put it best when she tweeted the following.

“Brett Kavanaugh was allowed to be angry. Dr. Ford wasn’t. Women grow up hearing that being angry makes us unattractive. Well, today, I’m angry – and I own it. I plan to use that anger to take back the House, take back the Senate, [and] put Democrats in charge. Are you with me?”