A mercy dash across the Tasman is being considered by the federal government to avert a nationwide shortage of shearers for Australia's sheep flock.

Strict border restrictions have all but shut out the almost 500 New Zealand shearers who travel across the ditch annually, raising concerns about animal welfare and a looming financial crisis for wool producers. 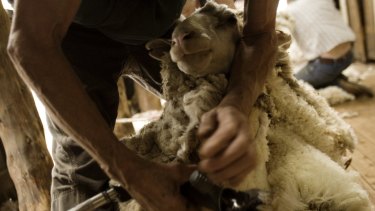 Data released earlier this month shows just 63,000 tonnes of wool came out of the nation’s shearing sheds in the three months to the end of June, the smallest quarterly clip on record.Credit:Nicolas Walker

The trade was added to the critical skills and sectors list for workforce visa arrangements by the Department of Home Affairs on Friday, with plans in place for what has become known as a "Wool Air" charter flight if required.

The Shearing Contractors Association of Australia has warned for months that up to 8 per cent of the 68 million-strong national flock may not be shorn in a timely manner if the 480 Kiwi shearers are unable to enter NSW and Victoria.

The industry estimates wool growers face a 50 per cent decrease in income this year, with retail demand for wool down 60 per cent and critical export markets of Italy and India crippled with coronavirus lockdowns.

Animal welfare issues associated with unshorn sheep include fly-strike, when a moisture build-up in long wool leads to fleece rot. Ewes lambing in spring with long wool may also experience difficult births and lambs may struggle to find the teat to feed properly.

Data released earlier this month shows just 63,000 tonnes of wool came out of the nation's shearing sheds in the three months to the end of June, the smallest quarterly clip on record. Thirty years ago, the nation produced 280,000 tonnes for the same quarter.

Commercial flights between New Zealand and Australia have ceased because of border closures, with a limited resumption not expected until September at the earliest if more than 50 people are booked.

Deputy Prime Minister Michael McCormack said the federal government was prepared to co-ordinate special charter flights across the Tasman for shearers to ensure the rural industry was supported over the coming critical months. 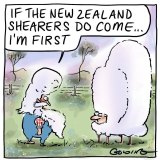 WoolProducers Australia chief executive Jo Hall said the industry was "really pleased" its concerns about the looming shortage had been sorted.

She said industry had been advocating strongly since April when it appeared travel restrictions would shut out short-term shearing contractors from New Zealand and Britain.

State border closures have also proved difficult, with a team from Hamilton in the western region of Victoria bound for south-west NSW recently told it would be forced to drive to Melbourne to fly to Sydney, quarantine for 14 days and then drive back towards the border.

"Wool growers have repeatedly proven that they are resilient and we have faced adversity many times before but the pandemic has produced new challenges," Ms Hall said.

The federal government recently negotiated a deal for up to 200 pickers from Vanuatu to harvest mangoes in the Northern Territory, allowing them to be on farms in early September.

Get our Coronavirus Update newsletter for the day’s crucial developments at a glance, the numbers you need to know and what our readers are saying. Sign up to The Sydney Morning Herald’s newsletter here and The Age’s here.