Gersson Rosas and his staff had spent five months working remotely by the time the N.B.A. draft lottery was staged on Aug. 20 to determine the order of the top picks. As the president of basketball operations for the Minnesota Timberwolves, Rosas saw it as an opportunity to do something different — an opportunity to return to the office.

“We were socially distancing with masks in the room,” Rosas said, “but we wanted to do it together.”

The lottery was virtual because of the coronavirus pandemic, with D’Angelo Russell, the team’s starting point guard, representing Minnesota on the ESPN broadcast from his off-season home in Miami. The Timberwolves had a 14 percent chance of landing the No. 1 pick. Luck was on their side.

As Rosas celebrated with a small group of co-workers that included Ryan Saunders, the team’s coach, and Sachin Gupta, the executive vice president of basketball operations, they were already looking ahead — though the date of the draft remained uncertain.

“If you’re in that position, you want to be prepared,” Rosas said.

There has never been a more strange year to own the rights to the No. 1 pick. If nothing else, the Timberwolves have had the luxury of time — so much time — to evaluate prospects and weigh their options ahead of Wednesday’s draft, which will finally unfold eight months after the Timberwolves last played a game and about five months after it was originally scheduled.

“We’ve had to guard against information overload,” Saunders said in a recent telephone interview, “because that is a real thing.”

Still, the Timberwolves appear to have done an encyclopedic amount of research. The team has thoroughly evaluated every player it deems “draftable,” Rosas said. In part, that has meant conducting more than 1,000 interviews — many with draft prospects and plenty more with the coaches and personnel from various basketball walks of life who know them the best. Gupta, who studied computer science at the Massachusetts Institute of Technology, has assembled a “pretty big spreadsheet” that includes player assessments in nearly 50 categories, including shooting, defense, passing, upside and psychological makeup.

“We do try to quantify most things,” he said, “and it’s not for the sake of having a number because we’re numbers people. It’s for the sake of trying to be objective and standard across the board.”

And then there is the video footage.

“For a lot of top guys, it has meant watching every minute of game film that exists of them,” Gupta said, “which isn’t something you’d be able to do normally. But we’ve had time.” 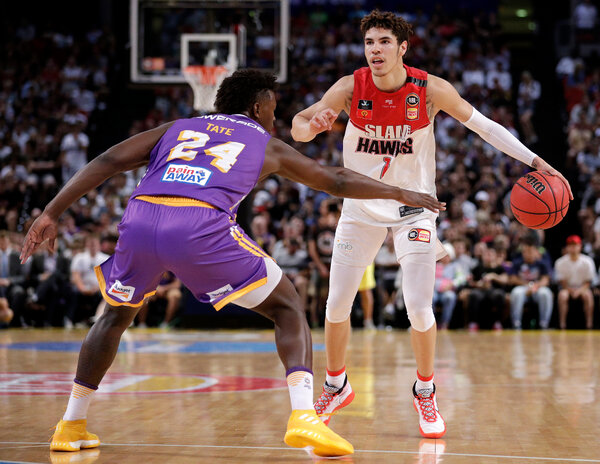 Adding to the intrigue, there is no clear favorite as the No. 1 pick. LaMelo Bell, James Wiseman and Anthony Edwards are among the players who have been projected to be in the mix. The Timberwolves have been cagey about their plans — they also have the Nos. 17 and 33 picks — while leaving open the possibility that they could make trades.

If they keep the top pick, the Timberwolves will still be building around two young stars in Russell, 24, and Karl-Anthony Towns, 25, a center and two-time All-Star whom they selected with the top overall pick in 2015. Minnesota has made one playoff appearance in the past 16 seasons.

“It’s nice to be able to pick a guy who doesn’t have to carry the whole burden,” said Rosas, who joined the Timberwolves in 2019 after a long run as an executive with the Houston Rockets.

In important ways, N.B.A. teams were hindered by the pandemic as they went about their preparation for the draft. The Timberwolves, Rosas said, would ordinarily welcome 60 to 80 prospects to Minneapolis for in-person workouts. The league also typically holds a predraft combine every May.

But because of league restrictions, the combine was done virtually and teams were prohibited from hosting prospects at their practice facilities.

The Timberwolves have compensated. Since the night of the draft lottery, the hub of activity for their predraft operation has been their self-described “war room,” a recently renovated conference room at the practice facility that Rosas had outfitted with magnetic whiteboards and oversize touch-screen monitors.

On any given day, 14 to 16 people — scouts, analysts, coaches, even medical personnel — gather in that room. They all undergo daily testing for the coronavirus, then study game film before engaging in spirited but congenial debate.

“Let’s say we study a group of players over several days,” Gupta said. “At the end of that, everyone will do their rankings and we’ll have a voting exercise, and we’ll compile that and discuss that some more. Generally, it’s a democracy.”

Saunders and his assistants have been part of the process from the start. Saunders sits between Rosas and Manny Rohan, one of the assistant general managers.

“It’s kind of like the bus,” Saunders said. “The seat you took the first day became your assigned seat in a way.”

It is, above all, a communal effort. If, for example, Rosas or another member of his staff interviews a prospect on a videoconference call from the relative privacy of an office down the hall, the interview is often projected onto a big screen in the war room so that everyone can watch.

In lieu of the usual combine and the other predraft activities that were shelved because of the pandemic, the league has allowed teams to meet with as many as 10 players in person. Rosas recently led a small contingent from the Timberwolves, including Saunders, on an eight-day, cross-country odyssey to work out seven prospects.

Much can be gleaned from watching film and from interviews. But there is still value in occupying the same physical space as prospects for their workouts — an experience that cannot be replicated by staring at a laptop.

“There are minute details,” Saunders said. “Maybe you can see how the ball rests on his palm when he’s shooting, or where his eyes are when he’s dribbling.”

For small-market teams like the Timberwolves, the draft tends to have outsize importance. It is easier to build through the draft (and through trades) than it is to attract top-shelf free agents to Minneapolis or, say, Milwaukee. No offense to either of those fine cities, but LeBron James did not film his “Space Jam 2” sequel on a studio lot in St. Paul.

The Timberwolves have had a mixed record in recent lotteries. Towns is a rising star, and they made Zach LaVine — now a solid player for the Chicago Bulls — the 13th pick in 2014. But Minnesota also used the second overall pick on Derrick Williams in 2011 and the fifth pick on Kris Dunn in 2016. Williams is now playing in Spain, while Dunn is bound for free agency after the Bulls, according to multiple reports, declined to extend him a qualifying offer.

Rosas, though, has already had an impact. In February, deep into his first season in Minnesota, he made a trade-deadline splash by sending Andrew Wiggins (a former No. 1 overall pick of the Cleveland Cavaliers) to the Golden State Warriors in exchange for a package that included Russell and two future draft picks.

Rosas knows that astute picks can help reshape a franchise. He referred to the 2013 draft, which was notable largely because Anthony Bennett went No. 1 over all to the Cavaliers and Giannis Antetokounmpo went No. 15 to the Bucks. Antetokounmpo has won back-to-back N.B.A. Most Valuable Player Awards. Bennett fizzled out of the league after four seasons.

He added: “Our philosophy is very strongly to take the best player available. We see the draft as a three- or four-year decision. Because while our roster might look one way now, in two or three years, through trades or free agency or whatever the case may be, it might change. So we don’t ever want to leave talent on the table.”

Few have deeper or more personal ties to the Timberwolves than Saunders. His father, Flip, who died in 2015, was synonymous with the franchise as a longtime coach and executive. Flip Saunders’s first draft as the team’s general manager was in 1995, when Ryan was 9 years old. Ryan Saunders does not remember much about that draft, other than that it worked out well for the team: The Timberwolves selected Kevin Garnett, a future Hall of Famer, straight out of high school with the fifth pick.

“My dad went through a couple of re-toolings, a couple of builds,” Ryan Saunders said, “and he always used to say that the lottery and draft night, no matter where you’re picking, can be a night of hope, because you can look to the future from there. Every once in a while, 10 years down the line, maybe you can say, ‘That’s when things changed for us.’”