But our reaction stories to last night's Champions League tie cover far more than snap verdicts. Read on below for all the latest club news. 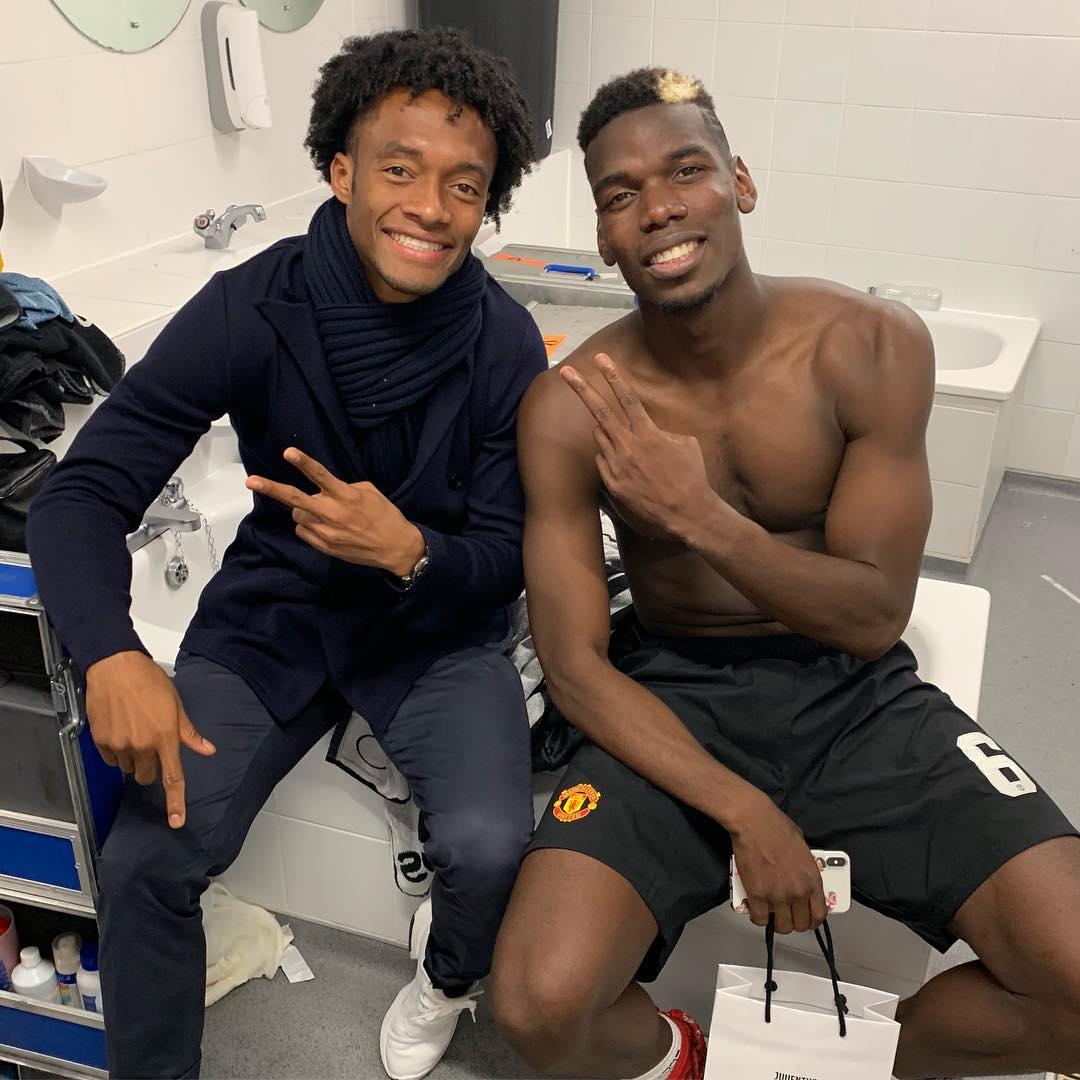 PAUL POGBA has been slammed by Manchester United fans… for smiling in the Juventus dressing room just minutes after his side's woeful 1-0 defeat.

Juve winger Juan Cuadrado shared an snap (above) of himself and Pogba in the away dressing room after the game.

JU HAVE THE BEST DEFENDERS

CRISTIANO RONALDO challenged a pitch invader – then got a selfie with the Old Trafford interloper.

The former Manchester United star grimaced at first but was grinning by the end of the exchange – just like his Juventus team-mates following their classy 1-0 triumph.

RIO FERDINAND insisted it was “men against boys” and fellow Manchester United old boy Paul Scholes rated Juventus as "a class above" in their 1-0 victory at Old Trafford.

Click HERE for their full reaction to a sobering champions League loss for Jose Mourinho's men.

OLD TRAFFORD supporters sung "Viva Ronaldo" as the Manchester United legend walked off a winner with Juventus on Tuesday night.

Much like boss Jose Mourinho, the home faithful delivered an honest verdict as United were left with just four points from their first three Champions League group games.

ANTHONY MARTIAL will start against Juventus, Jose Mourinho has told him.

The Frenchman repaid the Special One's new found faith in him by striking twice in United's 2-2 draw at Chelsea.

ANTHONY MARTIAL is keen to sign a new Manchester United deal – even if Jose Mourinho stays at the club.

The French winger was linked with an Old Trafford departure in the summer as his relationship with the Special One appeared to sour.

JOSE MOURINHO'S bust up with Marco Ianni could be exactly the spark the Special One needed to revive Manchester United's fortunes, SunSport columnist Ian Wright believes.

Wrighty says the Portuguese boss will enjoy huge backing from everyone at Old Trafford as the Red Devils go into their crucial clash with Juventus.

MANCHESTER UNITED have been alerted to the availability of promising Inter Milan centre-back Milan Skriniar.

The 23-year-old Slovakian has yet to agree a new deal at the San Siro and United are desperate to shore up their defence.

CRISTIANO RONALDO says Alex Ferguson gave his career a "huge lift" – as the Juventus superstar makes an "emotional" return to Manchester United in the Champions League on Tuesday night.

Ron, 33, said: "I can remember I won lots here. Cups and leagues. "The support was fantastic."

LEONARDO BONUCCI claims he rejected Manchester United to return to Juventus in the summer.

The world-class centre-back has revealed he was targeted by Jose Mourinho despite struggling to impress during his season's loan with at AC Milan.

JOSE MOURINHO says it is time to lay off Marco Ianni and has dismissed calls for the Chelsea coach to be sacked.

Ianni sparked a melee at the mouth of the Stamford Bridge tunnel on Saturday after celebrating in front of the Manchester United boss when Ross Barkley plundered a late equaliser in the 2-2 draw.

MANCHESTER UNITED have changed their team hotel on the eve of Tuesday’s Champions League clash against Juventus.

CRISTIANO RONALDO has been hailed as one of the all-time greats by his former boss Jose Mourinho.

The two Portuguese egos have had a turbulent relationship in the past but Mourinho was more than happy to sing the Juventus star's praises in his pre-match press conference for the Juventus clash.

JOSE MOURINHO has shut down rumours of a sensational move back to Real Madrid and insisted he is eyeing a new deal at Old Trafford.

Los Blancos boss Julen Lopetegui is on the verge of the sack but the Special One has a contract to 2020 and says he wants to stay even longer than that.

ANTHONY MARTIAL may have saved Jose Mourinho's job as his equaliser helped Manchester United to a stunning 3-2 comeback win over Newcastle two weeks ago.

But he also cost the club £8.7m as that strike meant the Red Devils had to pay the latest instalment to Monaco following his transfer three years ago.

Los Blancos are ready to swing the axe after a humiliating home defeat to Levante made it four losses in five games.

JOSE MOURINHO is reportedly launching an internal investigation after a mole leaked Manchester United’s team for the second time this season.

OLD TRAFFORD boss Jose Mourinho is sweating on another FA charge after his Stamford Bridge bust-up.

Ref Mike Dean HAS included the clash with Chelsea coach Marco Ianni, after Ross Barkley’s last-gasp leveller for the Blues in Saturday’s 2-2 draw.