The Sea Eagles have opened an investigation in an effort to determine whether the playing surface contributed at Lottoland has contributed to a series of ACL injuries suffered by their players at the venue this season. 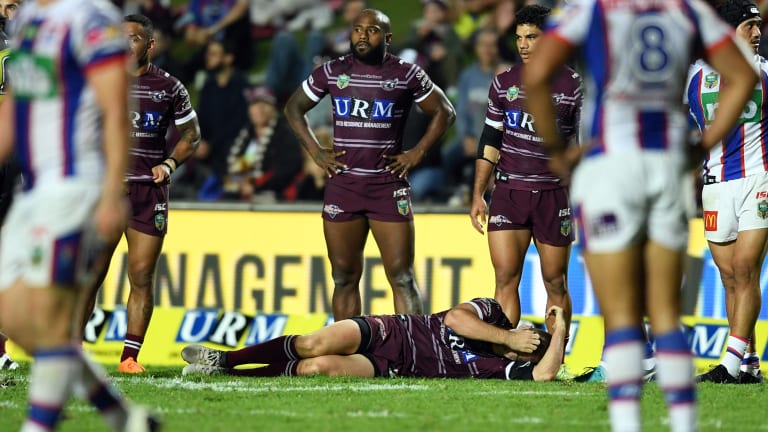 Cut down: Lachlan Croker became the third Manly player to suffer a serious knee injury at Lottoland this season.

The Rugby League Players’ Association contacted the NRL about the matter on Tuesday to learn what measures would be put in place to protect player welfare.

Sea Eagles coach Trent Barrett made reference to a surface that has claimed Lachlan Croker, Curtis Sironen and Kelepi Tanginoa in a post-match interview on the weekend.

Northern Beaches Council Mayor Michael Regan has proposed a left-field solution, calling for the grass to be replaced with artificial turf. Some NFL and English Super League grounds use artificial surfaces because of their resilience and consistency, but its not a path the NRL has taken as yet.

It is not the first time Regan has proposed the idea amid safety concerns at the Brookvale stadium, but this time he is prepared to pick up the tab.

“If the NRL want to come forward and sanction it and get us to put it in, I don’t think my council will have any hesitation in doing so,” Regan told Fairfax Media.

“In a heartbeat I would pay for it because it allows me to use it 60 hours a week. That means I can open it up to other community groups during the week knowing it won’t affect the surface on game day.”

The cost of maintaining the playing surface is about $600,000 per season, with Manly contributing about $370,000 and the council paying the remainder. However, the cost of servicing a synthetic field would be about $20,000, providing all parties with huge savings.

Under the current arrangement with the council the Sea Eagles have exclusive use of the ground for up to 12 NRL home matches, as well as 20 additional uses for fixtures such as junior matches. However, the council is upgrading up to 10 more fields to synthetic in coming years to ensure they can cope with the rigours of more sustained use.

“I understand the concerns, but the technology is getting better, it’s evolving all the time,” Regan said.

Manly CEO Lyall Gorman revealed on Monday an investigation would be launched into the quality of the playing surface, although Regan said he had received no complaints from the club.

“It was disappointing to read about it in the media when I was talking to him on Friday night at the game,” Regan said.

“To my knowledge and the knowledge of senior staff, there were no issues raised whatsoever. In fact, it’s quite the contrary. It was remarked by (Gorman) and others that the ground looked good.”

Regan said he was happy for his council to be trailblazers by bedding down synthetic turf.

“We are happy to be the first ones but it has to be accepted by the NRL and the Sea Eagles,” he said.

“The reality is if it’s the future – and it’s OK in Super League – this council is willing to be the first to do that.

“It makes far more sense because can have a lot more use out of it and open it up to the community.”

A spokesman for the NRL said it was unlikely to agree to a synthetic surface at Lottoland for NRL games. He said the NRL had received no report or complaints about the surface this year.

“Where we have had complaints in the past, we have engaged an independent expert to upgrade the surface at the ground,” the spokesman said.

“If there is currently a problem we would be happy to do that again but we do not believe a synthetic surface is appropriate for NRL games.”