West Coast fans heeded the call and turned Subiaco Oval into a sea of blue and gold one last time as their club held its sole public training session before Saturday's AFL Grand Final at the MCG.

Elated supporters queued outside the club's former home ground before Eagles players hit the track at 11.30am to rapturous applause from the 10,000-plus fans watching from the stands.

With demolition work imminent at the venue, Simpson urged club supporters to "say goodbye to the old girl" and also farewell players as their grand final week kicked off on a public holiday in WA. 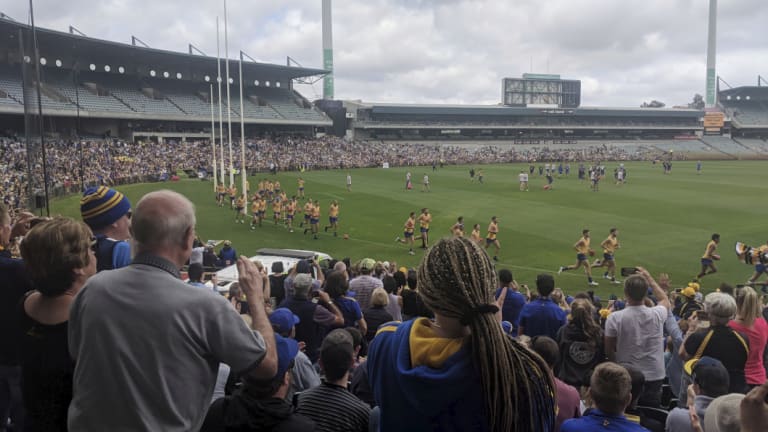 And flock they did to the former home of WA football, used as a training facility by the Eagles in 2018 and set to be demolished in the near future for a high school, public open space and housing.

"There are about 10,000, 12,000 fans going absolutely crazy here … they are running out of room to put them," Radio 6PR sports reporter Jimmy Williams said from the venue on Monday.

"The players are out now having a kick and there is a massive amount of support for the players."

West Coast will occupy new club headquarters in Lathlain later this year in time for 2019 pre-season training but those thoughts were a mile away for Simpson, his players and supporters, who last tasted premiership success in 2006 and still feel the itch of 2015's grand final loss to Hawthorn. 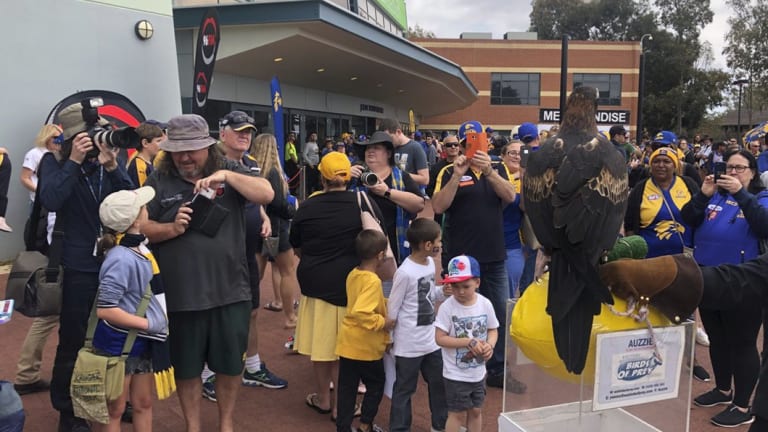 "Everyone says embrace the week," Simpson said ahead of euphoria that awaits his side this week.

"We'll open up training on Monday at Subi … so get everyone down there to say g'day.

"It's probably the last time we'll train there so it's a good chance to say goodbye to the old girl."

There are few injury concerns for West Coast ahead of Saturday's 12.30pm bouncedown, with Luke Shuey, Josh Kennedy and Jeremy McGovern expected to overcome niggles and take their spots, although McGovern didn't train with the main group at Monday's open session.

"We won’t be playing any games. He’s got a hip pointer that we’ve got to manage through the week,” Simpson said of McGovern after the session ended.

Some Eagles players will attend Monday night's Brownlow Medal ceremony at Crown Perth before a day off on Tuesday, a closed training session on Wednesday and a flight to Melbourne on Thursday.