The Australian Open semifinals begin on Wednesday night, headlined by the match between the 10th-seeded Serena Williams of the United States and the third-seeded Naomi Osaka of Japan. It will be their first Grand Slam meeting since the 2018 United States Open final, an Osaka victory in which Williams received three penalties from the chair umpire.

The victor will face the winner of the other semifinal match: between No. 25 Karolina Muchova of the Czech Republic and No. 22 Jennifer Brady of the United States.

Here’s what to look for in the match, which will start around 10 p.m. Eastern in Rod Laver Arena.

Williams, 39, started her career as one of the greatest closers at the end of Grand Slam events. In her first 28 trips to a Grand Slam semifinal, she won the title 21 times. But dating to her shocking loss to Roberta Vinci in the 2015 U.S. Open semifinals, Williams has struggled to wrap up Slam victories, winning the title only twice in 11 trips to a semifinal.

Since her victory in the 2017 Australian Open, Williams has remained stuck at 23 Grand Slam titles, one of the loftiest plateaus in sports history. Though she already holds the career record for Grand Slam titles in the Open era, which began in 1968, Williams has long had her eye on Margaret Court’s record of 24 major titles. 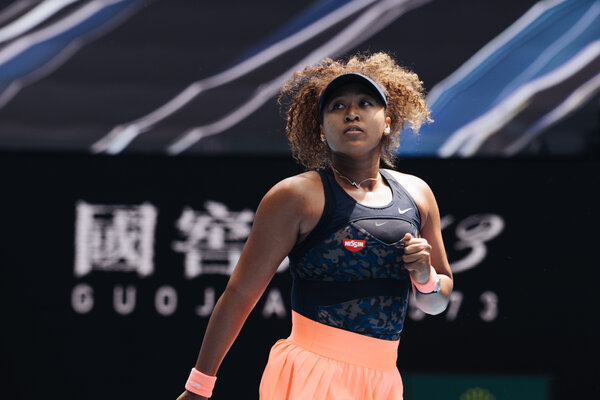 Osaka, 23, who grew up idolizing Williams, has been flawless at closing out Grand Slam victories early in her career. Osaka has made three previous Grand Slam quarterfinal runs; each time, she won the tournament. By reaching the semifinals this week, Osaka improved her record in the past three rounds of Grand Slam events to 10-0.

Osaka enters the semifinal against Williams, whom she has beaten in two of three meetings, having won 19 consecutive matches, the longest streak of her career. Her last loss came more than a year ago, in a Fed Cup match last February.

All three previous Osaka matches against Williams came after Williams’s return from maternity leave in 2018. Osaka will have never seen Williams moving as well as she has this week.

Williams joked after her quarterfinal win over the second-seeded Simona Halep that she was motivated to get in shape by the form-fitting catsuit that she knew she would have to wear on the court in Melbourne. Her improved conditioning has been reflected in her foot speed, allowing her to play breathtaking defense and extend rallies in ways she could not attempt in recent years.

Osaka, who can match Williams for power, won’t be able to rely on an advantage in foot speed as she had in their previous meetings.

Osaka and Williams have moved past the 2018 U.S. Open final.

The 2018 U.S. Open final descended into chaos as Williams incurred escalating penalties from the chair umpire Carlos Ramos for repeated code violations, whipping the crowd in Arthur Ashe Stadium into anger. Osaka was in tears after the match, and some criticized Williams for ruining her moment.

But despite opportunities to do so if she had wished, Osaka has never publicly blamed Williams for any aspect of that day’s mayhem. Williams and young up-and-comers have not always had warm relationships (see: Sloane Stephens), but she has always shown appreciation for Osaka.

The two have remained on good terms since the 2018 U.S. Open, and played an exhibition match in Adelaide last month.

“I think she’s a great competitor and she’s a cool cat,” Williams said of Osaka on Tuesday.

All coverage will air from 9 p.m. to 6 a.m. on ESPN2 in the United States; streaming is available on the ESPN+ and ESPN3 apps. Here are the other semifinal matchups.

The top-seeded Novak Djokovic had a health scare in his third-round win over the 27th-seeded Taylor Fritz, injuring his abdomen as he slipped on the court midway through the third set. Visibly struggling, Djokovic needed five sets to prevail over Fritz.

Despite lingering concerns, and Djokovic saying that the injury would have forced him to pull out from the tournament were it not an all-important Grand Slam event, Djokovic has played well in his subsequent two matches, beating No. 14 Milos Raonic and No. 6 Alexander Zverev both in four sets.

His next opponent is a considerably less familiar one: Aslan Karatsev, a Russian who is playing in his first Grand Slam main draw at age 27, and has turned into the Cinderella story of the event.

Karatsev, who qualified for the Australian Open by winning three matches at a qualifying event in Qatar last month, has used clean, powerful groundstrokes off both wings to dismantle other players, including No. 8 Diego Schwartzman and No. 20 Felix Auger-Aliassime. Karatsev advanced to the semifinals after his quarterfinal opponent, No. 18 Grigor Dimitrov, was limited by back spasms.

Djokovic should be expected to advance comfortably if he’s healthy, but if he’s not, no player has proved quite as opportunistic as Karatsev.

Though decidedly an undercard to the preceding Osaka-Williams clash, the semifinal between Karolina Muchova and Jennifer Brady could also prove compelling.

Muchova, an all-court player, has been able to outlast many opponents playing near their top form, including the top-seeded Ashleigh Barty in the quarterfinals. After struggling with the heat and taking a medical timeout midway through the match, Muchova dominated the later stages, staying steady and purposeful on her powerful forehand as Barty’s game went wayward.

For Brady, whose game is more built around power from the baseline, the run in Australia is a consolidation of her strong effort last summer, when she won a WTA tournament in Lexington, Ky., and reached the semifinals of the U.S. Open, where she lost to Osaka. Brady spent 14 days in hard quarantine before the tournament began, and she was the only player in those circumstances to reach the fourth round of the women’s singles draw.