Brain Moran made his long-awaited major league debut on Thursday night and turned it into a family moment that only sports can bring.

After playing as a minor league journeyman for a decade, a stretch that included numerous teams, Tommy John surgery, and even some time spent in independent leagues, Moran was called up to join the Miami Marlins during the final weeks of the season.

As fate would have it, the timing of his call-up meant that in his first games up, Brian’s brother, Colin Moran, would be in the opposing dugout as a third baseman for the Pittsburgh Pirates.

The elder Moran entered the game in the fourth inning in relief.

After forcing a ground out against the first batter he faced, Moran got to face off against his younger sibling. According to Elias, it was the first time that two brothers went against each other as a batter and pitcher while one was making his debut.

Brian’s first pitch went wildly into the dirt, but he calmed down and worked his brother until the count was full, before striking out his younger brother with a gutsy slider that nipped the low part of the zone.

Brian intimated that some brotherly knowledge went into his decision to throw an off-speed pitch on the full count.

“It was pretty cool to say my first strikeout was my brother,” Briansaid. “I had a feeling that if I could land a slider, he might not be expecting it. If I threw a ball, it might look like I was afraid of him. But I landed it.”

“He made a good pitch,” Colin said of his older brother. “I was looking heater, figured he’d come after me.”

While a professional baseball player likely never truly enjoys striking out, the smile on Colin’s face appeared to show that he didn’t seem to mind that his brother had bested him on this occasion. 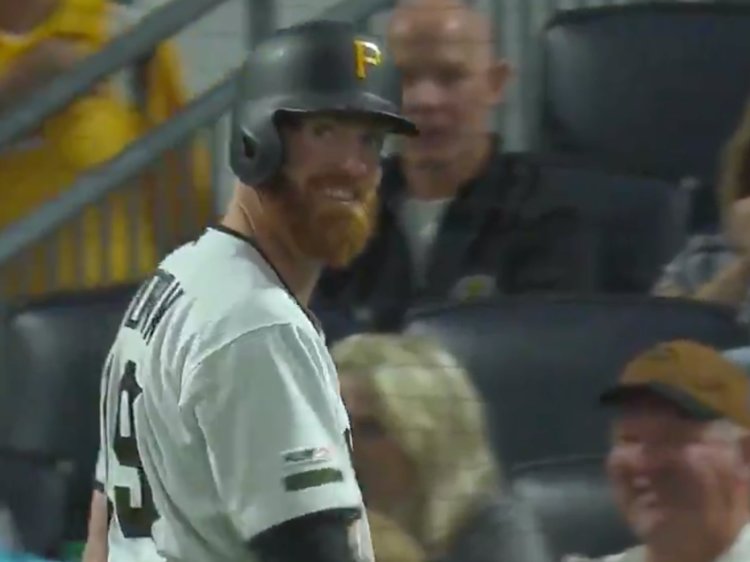 “I said, ‘Give me the ball. Maybe I could hold it for ransom or something,'” Colin said,per The Athletic. “I was messing around. I’m pretty sure it will be on his mantle every time I walk into Brian’s house.”

Thanks to a big inning at the plate from the Marlins, Moran would leave the night earning the first win of his career as well.

Moran’s stint in the majors might not last long — this is the final year that major league rosters will expand to 40 players for September, a rule that in many cases allows for stories such as Brian’s to unfold.

But regardless of what happens next, Moran’s night on Thursday was one to remember, and one he can hold over his little brother for the rest of his life.