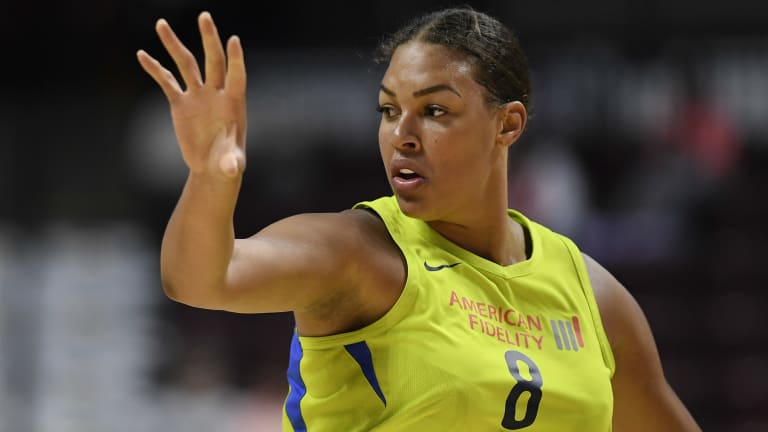 Liz Cambage and her Dallas Wings claimed something their millionaire brothers at the Dallas Cowboys and Dallas Mavericks can’t buy. Back-to-back play-off appearances.

An emotional Cambage put on another MVP performance, scoring 43 points and grabbing 13 rebounds as the Wings claimed a 107-102 win over the Las Vegas Aces in Dallas.

While Cambage has been dominating on the court, the Wings have struggled by losing nine-straight games and having coach Fred Williams dismissed.

This game was effectively an elimination game with the Wings and Aces battling for the last spot in the eight-team play-offs.

Cambage had 23 points in the first half and made some pivotal plays in the final term, including a three-pointer and a three-point play from the assist of point guard Skylar Diggins-Smith (23 points). Cambage was in tears post-game after a draining month and finally helping her side back to the play-offs. The win also came on her 27th birthday.

“We just had to win, we had a really rough month on and off the court,” Cambage told broadcaster Fox Sports Southwest.

“We had to win tonight and we got it done.

‘‘We haven’t been playing our game but we left it all out on the court. We finally got a win, we haven’t won a game since July 19. We got it off our back now, we can get on a roll and can feel good going into the play-offs.”

Cambage also became the first player in team history and the 15th in WNBA history to score more than 700 points in a season. This play-off appearance continues a run of success for Cambage since her return to basketball as she led the Melbourne Boomers to the WNBL grand final series earlier this year before they fell in three games to Townsville Fire.

The Wings play Seattle Storm this weekend to finish their regular season.

The play-offs start on Wednesday (AEST) with the Wings to play the fifth-seeded side in an elimination final with the sixth and seventh seeds also playing off. The two winners then play either the third or forth seed in another elimination game.

The win means Cambage and fellow Australian Opals forward Cayla George will remain in the US a little longer before joining up with the Opals for the Women’s World Cup in Spain, from September 22-30.

The WNBA season was adjusted to fit in with the World Cup, with the last possible date for WNBA finals to end is September 17.

Diggins-Smith didn’t mince words on her thoughts about Cambage.

“I play with the best player in the world, night in, night out,” she said, pointing to Cambage. “We live to fight another day.”