Philadelphia: The Philadelphia 76ers are investigating whether team president Bryan Colangelo used Twitter accounts to anonymously trash his own players and other executives and defend himself against fan and media criticism. 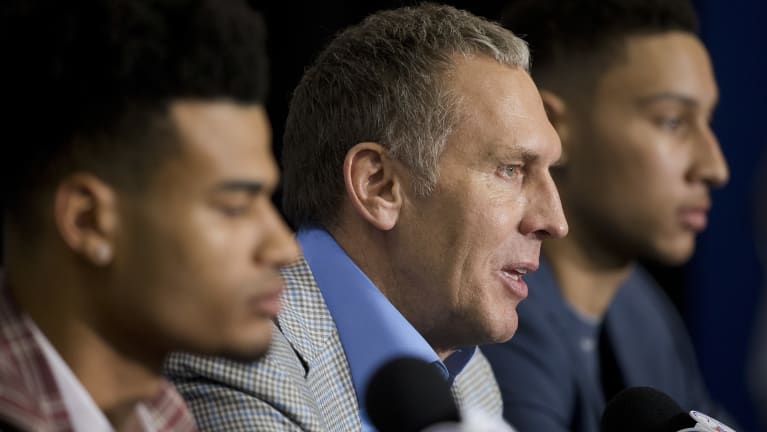 The 76ers; Bryan Colangelo (centre) is in hot water over alleged use of ‘burner’ Twitter accounts.

The site said it does not know the source of the tip but archived and monitored the tweets and found connections between the accounts.

Colangelo was hired as president of basketball operations for Philadelphia in April 2016. He served as Toronto's general manager from 2006-2013.

The son of long-time sports executive Jerry Colangelo, he stepped in with the Sixers after Hinkie resigned.

He lost his GM job in Toronto after the Raptors missed the play-offs for the fifth consecutive season and Ujiri took over basketball operations.

According to The Ringer, one of the Twitter accounts it connected to Colangelo downplayed Hinkie's role in the franchise's turnaround.

It also lamented in another post that Ujiri hadn't done anything to make the Raptors better.

Another account accused Embiid of "playing like a toddler having tantrums" and one criticised Fultz for his work with his "so called mentor/father figure".