Australia's Test stars could lose a series but still receive a significant bonus when a revamped incentive structure is thrashed out as part of the cultural rebuild of cricket.

As tensions rise between Australia and India heading into the Boxing Day Test at the MCG, this summer shapes as the last where Australia's players and coaches will receive a significant bonus based solely on whether they claim a series win. 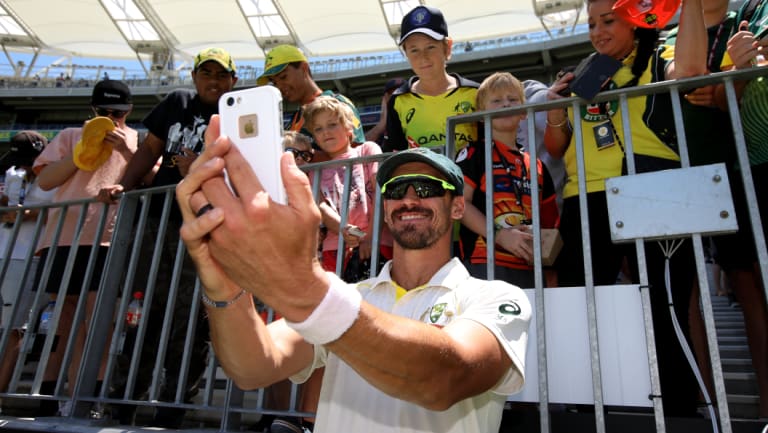 Smile: Mitchell Starc takes a selfie with young fans after the clinical finish in Perth.Credit:AAP

The Longstaff report recommended that "CA's performance reviews and bonus schemes be harmonised so that all versions take into account ethical and behavioural considerations as the basis for potential reward".

CA says a form of this was already in place, with 70 per cent allocation to performance and 30 per cent to "ethical and behavioural considerations to place more emphasis on leaders and staff living the Australian cricket values", but confirmed its people, culture and ethics committee will review the scheme.

That the executive staff had already been rated on behaviour raised eyebrows when the Longstaff report had been so critical of the governing body's overall culture.

Longstaff recommended an Australian Cricket Ethics Commission be introduced. CA responded by confirming it would appoint an independent ethics commissioner with direct access to CA chairman Earl Eddings and his board. This role could involve the monitoring of off-field incentives to players and the executive.

Culture continues to be the buzzword of the Australian side, particularly after the way captain Tim Paine and his men found their groove during a pressure-easing victory in Perth.

The Australians were praised for finding the balance between a robust, chirpy demeanour without the need for crossing the so-called line and becoming boorish.

Paine and Indian skipper Virat Kohli had their moments, including a slight bump when the Australian completed a run and Kohli was unnecessarily in his way, but coach Justin Langer said he had no issues.

"I thought it was brilliant. As the two captains, they're trying to stamp their authority on the game and I don't think at any point there was any abuse or any real aggro to it. In fact there was a bit of humour and there's been a lot of talk about banter and there's got to be some in a Test match," he said.

"I think it's a great part of the game and there was actually a bit of humour, a bit of Aussie humour as well. That's what we pride ourselves on. We've got a bad reputation in a lot of ways but when there's a bit of humour in it, I thought it was a good exchange."