BARCELONA, Spain — In the last eight days, an era has ended, a dynasty has been dismantled, an aristocracy has crumbled and a balance of power that held for a decade has shifted. Change has swept through the Champions League. European soccer’s landscape has been transformed. Not that it was easy to tell from Barcelona last night. Here, where the hosts thrashed Lyon, 5-1, on Wednesday, it all felt the same as ever.

This has been a tumultuous week. The peak came right away: Real Madrid — the team that had held this competition in its thrall, seemingly incapable of not winning it, its opponents apparently dazzled by the mythology of those bright white jerseys — humbled, at home, by a young and vibrant and entirely dismissed Ajax.

The next night, Paris St.-Germain fell, the prize its Qatari backers covet more than any other once again proving elusive, despite the cushion provided by a two-goal lead from the first leg and the insurance policy of a squad assembled at extravagant expense.

There might, ordinarily, have been some solace in being eliminated by one of Europe’s true giants, Manchester United, but that would only have applied if it had been Manchester United’s first team. It was not. It was a patchwork, scratch sort of a side, cobbled together with what little material Manager Ole Gunnar Solskjaer had at hand, and it was still enough. 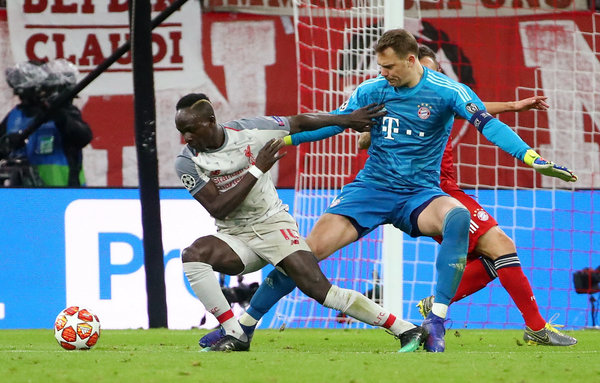 And then, on Tuesday night, that other great cornerstone of European soccer — Atlético Madrid’s defense, so miserly and obdurate — came unstuck. It was generally held to be inconceivable that a team as disciplined and well organized and gnarled as Diego Simeone’s could contrive to throw away a two-goal first-leg lead, but contrive to it did. “It was not a lack of character,” Simeone said in Turin. “Juventus was just better than us.” He has not built his reputation on such acquiescence to defeat.

Wednesday brought one more: Bayern Munich beaten comfortably on home territory by Liverpool, its players and coach, Niko Kovac, admitting that they had deserved no more. For the first time in 13 years, there will be no German teams present on Friday when the draw for the quarterfinals is made. There will be four representatives from the Premier League, for the first time in 10.

No wonder, then, there is a sense that the guard is changing, that this will prove to be the season that bridges two distinct ages. The time of this incarnation of Real Madrid has passed, most obviously, but perhaps that can be said of others among the clutch of superclubs who have, for the last decade, dominated the latter stages of this competition, too.

Bayern is gearing up to rejuvenate its squad. Atlético will lose the player that has best encapsulated its recent history — the grizzled Uruguayan defender Diego Godín — this summer.

As they stumble, the English rise: Manchester City’s destruction of Schalke cemented its place as the favorite to inherit Real Madrid’s crown; Liverpool reached the final last year, and is a more rounded, more durable side this time around. Tottenham beat Borussia Dortmund in both legs, displaying a maturity it has previously lacked. Manchester United, reborn under Solskjaer, has a sense of abandon and fun that makes it dangerous.

The Premier League is, at last, benefiting not only from its vast financial advantage over the rest of Europe, but from its decision — belated, admittedly — to spend a rather greater proportion of that on managers, rather than players.

That is one reading of the situation, anyway. It is not the only one. The Champions League is about teams, of course, and about dynasties and eras and power bases and all of that, but more than anything, it is about players. Indeed, if the dominance of Real Madrid taught us anything, it was that, currently at least, this is a competition defined by individuals more than by systems. And those individuals have not changed at all.

On Tuesday, it was Cristiano Ronaldo, scoring yet another hat-trick to pull Juventus clear of Atlético, to send the Allianz Stadium into raptures, to deliver on the reputation that convinced the Italian champion to spend somewhere north of $100 million on a 33-year-old forward last summer.

And on Wednesday — obviously — it was Lionel Messi, scoring twice, creating twice, and orchestrating Barcelona’s demolition of a courageous, fearless but utterly outgunned Lyon.

For a while, the French visitor discomfited Barcelona; for a while, there was a gentle draft of change here, too, if not quite a full wind. Lyon defended valiantly, and counterattacked with zest, before Barcelona broke the deadlock — a Messi penalty, deftly, almost thoughtlessly, chipped past Anthony Lopes.

For a few minutes in the second half, too, Lyon had hope: Lucas Tousart had made it 2-1; a single strike, a bounce of a ball, would have been enough to add Barcelona to the list of giants toppled this season. It did not last long. Messi soon snatched it away.

His second goal — a delicate shot at the end of one of those mazy dribbles where the ball seems to fall completely, hopelessly under his spell — effectively killed the game, before his two assists, for Gerard Piqué and Ousmane Dembélé, helped a victory bleed into a rout.

But that is not what stood out. What makes Messi so captivating is that it is not just the killer blows that count, but all of the jabs and the thrusts and the parries. It is watching him dance around and skip over and ghost away from tackles. It is the precision of his passing, his unerring ability to make the right choice. Messi rarely tries the spectacular, the unlikely: he does not abuse his status, his talent. He just makes sure he does everything, almost everything, right. His gift has always been his simplicity; that is not fading, not at all, not yet.

Eras do end, and times do change. Identifying when is not an exact science, of course: they tend to drift into each other; there are rarely clean breaks. But perhaps it is fair to say that Real Madrid’s period of dominance is at an end, or that the age of the superclubs has been put on hiatus, or even that Spain’s pre-eminence in European competition (every Champions League title since 2014, and 7 of the last 10) is over.

But it is equally possible that none of those eras existed in the first place, and that instead they were simply consequences of the age of Messi and of Ronaldo, their teams the beneficiaries of their greatness, their ability to decide games and define seasons. That has not changed. Their age is not over yet. Everything might look different. Messi and Ronaldo, though, are still the same.