Jack, the 20-year-old freestyler sprinter from Brisbane, cited "personal reasons" as she abrubtly left the Dolphins staging camp in Japan just a week before the start of the FINA World Championships. It emerged late on Saturday that she had in fact learned of a positive sample taken by testers at a training block in Cairns on June 26. 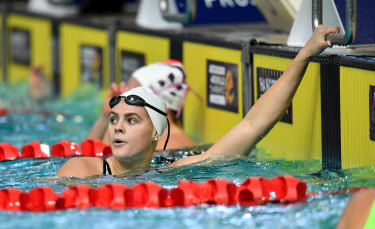 Swimming Australia said they were unable to make the provisional suspension public as they were bound by ASADA protocol.

Instead, the news broke after a week where the Australians took a very public stance against doping, with Horton refusing to share a podium with Sun, who served a three-month ban in 2014 and has a pending WADA appeal to a FINA doping panel that excused him from smashing a vial of blood after taking issues with the accreditation documents of testers.

The Australian team was only informed of the anti-doping violation at the Athletes Village on Saturday afternoon, before a number of swimmers were involved in semi-finals and finals later that night.

Campbell said she would wait for the full processes to be followed and stressed that Jack's test result, which has yet to be fully verified by a B Sample, did not change their stance as a team.

"I had absolutely no knowledge of this before tonight. All I knew was that it was a personal matter and we were respecting her privacy. We have to respect the process. We stand for clean sport. The fact that Shayna isn't here at the moment strengthens that stance," Campbell said.

"Full processes will need to be followed. Once more information comes to light we can pass judgement. At the moment, the Australian team stands for clean sport. Unfortunately, that is why Shayne is not with us."

In a post on her social media channels, Jack insisted she did not knowingly take any substance that would give her an artificial advantage or put her career in jeopardy.

"I did not take this substance knowingly. Swimming has been my passion since I was 10-years-old and I would never intentionally take a banned substance that would disrespect my sport or jeopardise my career," Jack said.

"Now that there is an ongoing investigation and my team and I are doing everything we can to find out when and how this substance came into contact with my body."

King has become one of the most-vocal anti-doping campaigners in the sport and has called out Sun as well as her breaststroke rival, Efimova, who has twice served doping bans in her career.

She said she would not discriminate when it came to doping and a positive test in your own back yard should not dilute the message of clean sport.

"Three years ago I commented on an athlete from the US that was doping (track athlete Justin Gatlin) and it shouldn't matter what country they're from even if they're from your own country," King said.

"Doping is doping so I don't think it should effect the protest too much."

When asked by a Chinese reporter why should we call Sun a drug cheat but not Jack, King said: "She is a drug cheater, she has tested positive on a drug test. I said I don't know the details in the case yet so we will see."

South African great Chad le Clos was another with little sympathy for the Australian, although the details of her positive and the particular substance have yet to be revealed.

"I might get in trouble for saying this but I definitely think that if certain swimmers tested positive they’d be banned for life but some didn’t because of the federation behind them. I mean, who’s swimming tonight guys, look who’s swimming this week."

Swimming Australia had refused to elaborate on the reasons behind her withdrawal but issued a statement on Saturday night, confirming the adverse finding. Head coach Jacco Verhaeren was not available for comment and chief executive Leigh Russell will front the media in Melbourne on Sunday.

"Once Swimming Australia was made aware of the adverse test result it immediately took action – in accordance with the national policy – to provisionally suspend Shayna from the Australian Swim Team while a process was underway and accompanied her back to Australia from a training camp being held in Japan," the statement said.

"Under the specific legislation governing Australia's drug testing regime, Swimming Australia is notified of any adverse test result as is WADA and FINA. Under the process, all details are required to remain confidential until ASADA has completed its investigations, the athlete is afforded due process and an outcome determined." 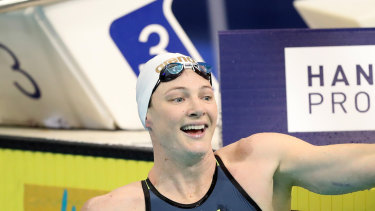 Australia’s most senior swimmer, Cate Campbell, insists no member of the team had knowledge of Shayna Jack’s positive drug test.Credit:AAP

The optics for Swimming Australia are terrible and questions were quickly raised about their handling of the issue. While SA insist it had no choice but to keep the matter private under ASADA protocol, Richard Ings, the former head of ASADA, quickly took them to task, saying on Twitter:

Should Horton have known of the provisional ban handed to Jack, it's highly questionable whether he would have been so confrontational when it came to Sun, who he famously called a 'drug cheat' in Rio.

It is understood that only a select few staff at SA knew of the matter and none of the swimmers or coaches outside of Verhaeren and potentiall Dean Boxall, Jack's coach at the St Peters Western club in Brisbane. Those that did would have surely watched the week play out with a degree of trepidation given the inevitable backlash that was to come when Jack's test was made public.

Sun's occasional coach, Australian Denis Cotterell, had branded Sun's detractors as 'hypocrites' and a positive test for Jack will put the entire squad in a challenging position.

The Australian Swimming Coaches and Teachers Association had earlier in the week called for a life ban for anyone that had tested positive. That stance will be tested to its limits now it involves one of their own.