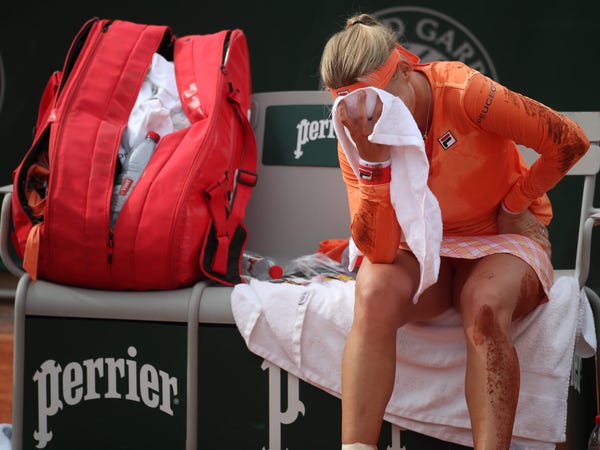 But what appeared as a valiant display of perseverance to some viewers came across as an elaborate acting job to others — particularly Bertens' opponent, Sara Errani.

After losing the first set in a tie-break, Errani took the second and battled Bertens in a tie-break for the third. But the visually-frustrated Errani — who struggled to land her serves throughout — eventually descended to mocking her opponent, who appeared to be struggling with a quad injury late in the three-hour marathon match.

The unsportsmanlike conduct didn't stop there.

After Bertens broke through to win the final set 9-7 and advance to the third round at Roland-Garros, Errani refused to shake hands or tap racquets with the victor. The Italian walked off the court, shouting "vaffanculo!" in her native tongue, which roughly translates to "f— you" or "go f— yourself."

Bertens, meanwhile, collapsed on the court for eight full minutes after her victory. She hobbled to her chair and sobbed as trainers worked on her leg, and eventually needed to be carted off the cart in a wheelchair.

Still, Errani had doubts that her Dutch foe was being honest about her pain. While speaking to the press after the loss, the 33-year-old insisted that Bertens was "running like never before" and admitted that "she made me angry."

"I don't like when somebody is 'playing' with me," Errani said, per reporter José Morgado. "She left the court on a chair and now she is all good eating in the restaurant, I just saw her."

Bertens was quick to dismiss Errani's complaints during her own post-match media availability, maintaining that she would take up an acting career if she were able to fake an injury that convincingly before blaming Errani's struggles on her own shortcomings on the court.

"I understand her frustration," Bertens said, per tennis writer Ben Rothenberg. "She had her opportunities; she didn't take them."

Bertens advances to take on Czech 24-year-old Kateřina Siniaková Friday, though it remains unclear if her leg injury will allow her to continue in the tournament. Errani could face fines for her vulgar post-match language or various other outbursts during the contest.