The boys’ varsity lacrosse team that is playing this weekend for its third consecutive New York City public schools championship practices on a concrete handball court in a city park with no lights, no room for spectators and broken fencing.

The team is from Frederick Douglass Academy in Harlem, an area not known for churning out top lacrosse talent — at least until recent years, when the Lions started beating most of the competition.

There are no tryouts and no cuts. The team’s success on the field came almost by accident: The school is the birthplace of Harlem Lacrosse and Leadership, a nonprofit group that began as a way to entice middle school students to stay on track for graduating and going to college. It installs an academic support team within schools and requires students to attend study hall and keep their grades up in order to play.

As lacrosse struggles to be seen as something other than elite, suburban and mostly white, the Lions are a sign of progress. Their success comes as public school lacrosse has been transformed in a city in which there were once just six boys’ programs (including four on Staten Island). There are now 24, along with 27 varsity girls’ teams, with nonprofits like CityLax and Harlem Lacrosse driving the expansion.

“I always had the heart and mind to be successful, but I didn’t have the support,” said Davon Johnson, a senior who will attend the college prep school Vermont Academy next year on nearly a full scholarship. Lacrosse “changed my life,” he said. “It helped me find direction.”

The sport’s rapid growth has created some challenges for city schools, like finding a place to play. To practice on a real lacrosse field, the Frederick Douglass players must travel. So, one by one, they file out of their brick school, hop on the subway and then walk a few blocks to catch a bus bound for Randalls Island, situated between Manhattan, Queens and the Bronx. 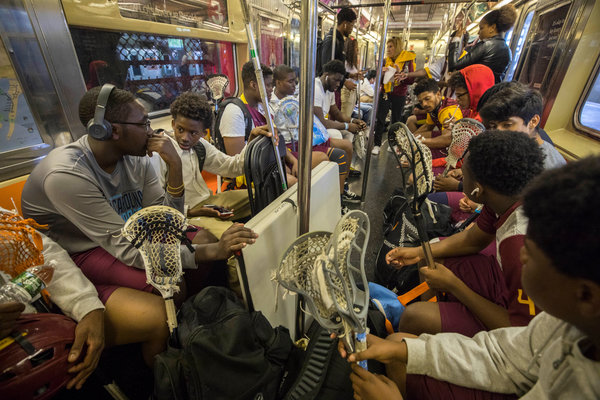 By now, they’re used to the funny looks and questions generated by a 40-man team commuting by public transit to lacrosse practice. “Is that a hockey stick?” a man asked one afternoon.

The players say they love the sport’s fast pace and team focus. And they don’t mind making a lacrosse stick seem less foreign around the city.

Nearly an hour after they left school, they met for practice at Field 50 ahead of the playoffs. On Thursday, they beat Hunter College High School, earning another trip to the final. On Sunday night, they have a chance to claim their third consecutive title, and their fourth in seven years, when they play Tottenville of Staten Island.

The Lions’ backer, Harlem Lacrosse, started, unofficially, in 2008 with 11 students, 10 sticks and Simon Cataldo, a special-education math teacher and Teach for America member who wanted to give his most challenging students a reason to stay in school. When the team grew to 35 students, he co-founded the organization in 2011.

The program now counts about 1,000 students — boys and girls, 99 percent of whom identify as nonwhite — in five cities, after spreading to Boston, Philadelphia, Baltimore and Los Angeles. In N.C.A.A. Divisions I, II and III, only 18.2 percent of men’s lacrosse players identified as nonwhite in 2018, according to N.C.A.A. statistics.

Harlem Lacrosse aims to expand from middle schools to high schools as well — Frederick Douglass is its lone high school program, and in the fall, its girls’ varsity lacrosse team will become the first to be affiliated with Harlem Lacrosse.

Frederick Douglass Academy students have gotten scholarships to attend private boarding schools and colleges, such as Bates, Haverford and Hobart. This year, for the first time, an F.D.A. alumnus played Division I lacrosse when Dy-Jae Pearson suited up for Bryant University in Rhode Island.

Roaming the school’s hallways to ensure that students are attentive in class is Owen Van Arsdale, a former lacrosse star at the University of Virginia who functions as a coach and chief mentor, monitoring grades and attendance. To get the team to play tougher competition, he scheduled four nonleague games this season against suburban schools — the Lions lost all four (though they have previously beaten suburban schools).

In the locker room, a progress report attached to a whiteboard reveals that 14 players made the honor roll recently. Several students have gone from failing classes to passing, others from barely passing to thriving.

“I don’t know where I would be without this,” said Sekou Soumahoro, a sophomore at F.D.A. who plays attack.

Students stumble upon the game in various ways. Many learn from older students or friends who play. Soumahoro was a basketball player until seventh grade, when a friend taught him how to play lacrosse. He has been hooked since and wants to play in college.

Born in Harlem, he moved with his family to Queens, where he rises at 5 a.m. every weekday for a 90-minute subway ride to school. He uses the time to do homework and read. The program gives the team a sense of purpose, he said, and its academic focus helped him turn mostly C’s and D’s into A’s and B’s.

“I would get in trouble a lot, then Harlem Lacrosse changed me,” Soumahoro said. “I learned the game on concrete, so it took some getting used to on a real grass field. There are days I will be on the train and people will look at me like, ‘A black kid has a lacrosse stick in their hand?’”

Students say they sometimes sense classmates and onlookers believe lacrosse is not supposed to be played in the city by kids who are black, Latino or multiracial. That perception, along with a lack of resources for fields and costly equipment, has long held lacrosse back in cities.

Lacrosse is America’s fastest-growing team sport, according to U.S. Lacrosse, and Devin O’Brien, a former teacher who is now executive director of Harlem Lacrosse New York, said he receives a steady flow of emails from parents and principals asking if Harlem Lacrosse can come to their school. But there is a long waiting list: The program’s biggest challenge is a lack of funding, despite support from the New Balance Foundation and the Dick’s Sporting Goods Foundation.

For now, F.D.A. remains the only place where Harlem Lacrosse students can develop as players and leaders at the high school level.

One is junior Rashad Saleh, who discovered the sport when a Harlem Lacrosse coach went to every classroom introducing the game. This season, he is a team captain.

“Coaches told me, ‘You are able to do this,’” he said. “I didn’t think anybody would give me that push. Harlem Lacrosse is the little school behind the school that gives you the push. It gets to the point where the security guard has to come upstairs and kick us out of school because we’re studying late.”

This year, each student wrote a note to a teammate. Saleh addressed his to Donte Martinez and noted how, like many of his teammates, he had become an honor student, using lacrosse as a catalyst to turn around his life.

Saleh wrote: “To Donte: We as a team notice that you’ve come a long way. We see that you’ve been missing practice for pm school but it’s good because you are taking care of what’s important. I believe you will be successful in whatever you do after high school. I appreciate the energy you bring when you do get to come to practice.”

The message, on a 4-inch-by-6-inch notecard, is fixed to Martinez’s locker, for all to see.