A karting star had a full-fledged meltdown at the World Championships, throwing a bumper at oncoming traffic and attacking an opponent 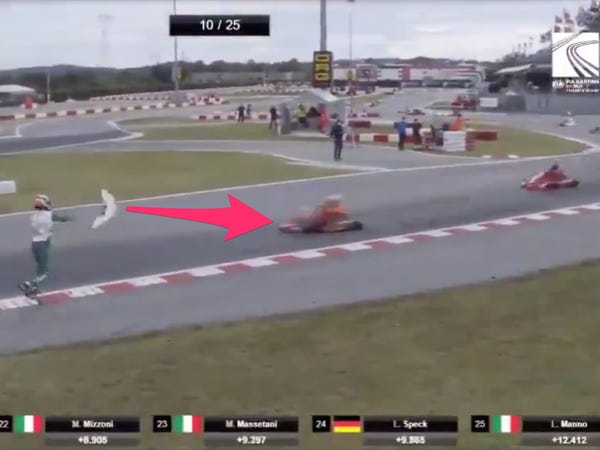 An Italian karting star faces a potential lifetime ban from his sport after throwing a temper tantrum of epic proportions during a race on Sunday.

Luca Corberi crashed out of the FIA World Karting Championship at South Garda Karting Circuit in Lonato, Italy, after colliding with one of his opponents during the ninth lap. Clearly furious over his disqualification, the 23-year-old driver pried the bumper off of his kart, waited alongside the track, and heaved the kart part into oncoming traffic in an attempt to hit fellow driver Paolo Ippolito.

Ippolito, who had been part of the collision that ousted Corberi from the race, managed to stay on course as the bumper bounced off the asphalt and cluttered into another driver's cart.

After the race concluded, Corberi found Ippolito in parc ferme — where all the drivers park after exiting the course — and tackled him to the ground. Corberi threw a punch at his fellow countryman before other drivers intervened and separated the pair. Once again, Corberi's questionable behavior was caught on camera.

Fédération Internationale de l'Automobile (FIA) international karting commission president Felipe Massa called Corberi's actions on Sunday "unacceptable" and promised that he would face "consequences" for his actions. But upon reflection, Corberi himself recognized how indecent his conduct was and acknowledged that he is deserving of a lifetime ban.

"I'd like to apologize to the motorsport community for what I've done," Corberi wrote in a Facebook post published on Monday. "There are no excuses to explain why I've done such a disgraceful act. This has been something I've never done in my 15 years of career, and I really hope it won't be seen by anybody else in the future."

Corberi said that, after the race, he asked the sporting judges to remove his license but that "they don't have the power for doing it." Instead, the young racer decided to take his punishment into his own hands.

"For this reason, I've decided to don't take part to any other motorsport competition for the rest of my life, that's not a self justice, it's simply the right thing to do," Corberi wrote.

Unsurprisingly, Corberi was disqualified from Sunday's race. He has yet to receive a formal penalty from the FIA, but he's said that he "will totally agree with the punishments required" once the infractions are handed down, per Autosport.