Nothing stays secret for long in soccer. So thorough is the game’s hunt for talent and so desperate its thirst for players that no territory goes uncharted, no stone unturned, no prospect unobserved. Distance is no barrier. Remoteness is not a factor. The searchlight is so bright that there is no such thing, any more, as obscurity.

And so, over the course of the last year, the powerhouse clubs of Europe’s major leagues have been turning their attention to Sangolqui, a suburb to the south of the Ecuador’s capital, Quito. They have focused on a club that hardly uses its own tight, compact stadium, and on a teenage midfielder not yet two seasons into his senior career.

Moisés Caicedo would not have known it — not until recently — but his name has been playing on the lips of scouts and technical directors across Europe for months.

Few, if any, clubs from the old world have a dedicated scout for leagues like Ecuador’s. Instead, emerging players are spotted in South America's continental competitions — the Copa Libertadores and the Copa Sudamericana — or tracked through international youth tournaments.

When a player of interest is identified, members of the recruitment staff trawl through footage of his domestic displays, and the corresponding performance data, on platforms like Wyscout, InStat and Scout7. Only then, if the numbers add up, will scouts — either club employees or trusted freelancers in specific markets — be sent to watch the player in person.

An energetic and composed midfielder, Caicedo, now 19, passed every test. Manchester United’s South American scout alerted his employers to Caicedo’s ability. A.C. Milan found that the data and the assessment of their talent spotters tallied up. Club Bruges, the Belgian champion, noticed him, too. So did a phalanx of teams from England — Brighton and Chelsea among them. Nothing, after all, stays secret for long.

All, independently, determined that Caicedo was an interesting proposition. Many of them started making discreet enquiries, performing the due diligence on both the player and his club — Independiente del Valle — to work out how a deal might be done. And they all heard precisely the same warning: Finding Caicedo was the easy bit. Working out how, exactly, to sign him would be much more difficult. 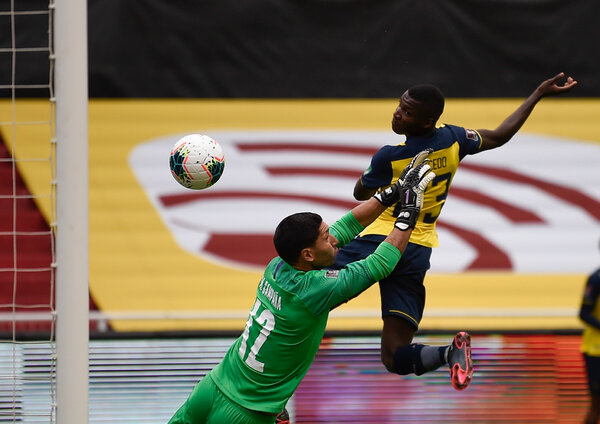 Even at Independiente del Valle, there was some surprise at just how quickly the teenager the club had found playing in Santo Domingo — a small city a few hours west of Quito — had developed.

When he moved to Sangolqui, Caicedo was not one of the standouts on the under-16 team that he joined, but he was quiet, determined, a fast learner. That squad contained several players who would represent Ecuador at the youth level, but by late 2019, Caicedo had outstripped them all.

He made his league debut for Independiente in October that year, as a substitute against Liga de Quito; by the end of the month, he had his first start. In February 2020, he captained the club’s youth side to victory in the under-20 Copa Libertadores. When he returned, he went straight to the first team: He appeared in his first senior Libertadores game in April.

If the speed of his success was a touch unexpected, it was treated within Independiente as vindication of the club’s model. Though the team had been founded in 1958, its modern incarnation came into being only in 2007, when it was taken over — and turned into a private enterprise — by a group of entrepreneurs, led by Michel Deller.

“There was a clear vision,” said Luis Roggiero, the club’s sports manager. “There is a pool of talent in Ecuador that had not been given an opportunity to develop: The players that had come through had done so on their own merit, not because they found a club or federation that helped them. The idea was to construct a club to compete at national and international level by finding our own talents, finding them early, and developing them our way.”

To do that, the club commissioned a study of the districts in Ecuador that produced the most players, Roggiero said, and then constructed training bases in each of them: dragnets to capture whatever talent came through. The best prospects would then be recruited to the club’s main training facility in Sangolqui — which contains accommodations for 120 young players and an on-site school — to be inculcated in the team’s style of play.

“We built an idea of how we wanted to play, and then designed training — technical and physical and mental — to help them produce that,” Roggiero said. It was a long-term plan that has born fruit: In 2016, less than a decade after Deller and his associates found the club in Ecuador’s third division, Independiente reached the final of the Copa Libertadores, where it lost to Colombia’s Atlético Nacional. The club is now a regular sight in the latter rounds of South America’s biggest club competition.

Roggiero attributes that success to the fact that — unlike many teams in Ecuador, and across South America — Independiente is privately owned. “We are not subject to elections, so we can have long-term horizons,” he said. “We can be responsible financially, we can maintain the same administration. The club can be sustainable. The idea has been reinforced by the results we have had in our short history. It shows the road we have chosen is valid.”

Success on the field, though, is not the only gauge of the club’s success. So, too, are the players it has produced. Graduates from Independiente’s finishing school are now a regular sight on Ecuador’s various national teams: Seven members of the current men’s squad came through the club’s system, as did six players on the women’s national side. Scouts, agents and technical directors now flock to Sangolqui to scour its youth teams for signs of promise; an annual international under-18 tournament it hosts has become compulsory viewing for those in the recruitment business.

In recent years, Independiente has been able to sell players not only to the leagues that have some tradition of importing from Ecuador — those in Argentina, Mexico, Brazil — but also, increasingly, to clubs in Europe: Players have left for Granada and Real Valladolid in Spain, for Italy’s Atalanta, for Brighton in England, for Genk in Belgium and for Sporting Lisbon in Portugal.

As Caicedo’s star rose, it became clear that he would be the next to make that journey.

But while more European teams might be aware of Independiente — and Ecuador as a whole, after a run of success for its international youth teams — as a source of talent, the country remains an unfamiliar market for most.

Its clubs, generally, prefer to sell to other South American leagues, where the initial fee can often be higher; the most powerful agencies in the country tend to have well-established links with Brazil, Mexico and the United States. Few European teams have a presence, or a way in. For them, it can be uncertain, unfamiliar ground.

And there are always plenty of people, in soccer’s transfer market, ready to capitalize on any uncertainty at all. Unfamiliarity, for some operators, means opportunity.

Most of Europe’s clubs received the same feedback when they started to delve a little deeper into Caicedo’s situation: It was not immediately clear, they were told, precisely who was representing the player, who had the power to agree to terms on his behalf. “Too many agents involved,” as the note sent to one recruitment department read.

A transfer deal should, on the surface, be a straightforward thing. The buying club should — strictly speaking — contact the selling team, establish a price, and then contact the player’s agent in order to work out the personal terms.

If that is a little naïve, then the pragmatic alternative — contact the agents first, find out if the player is interested, ask what a deal would cost, and then present the selling club with a fait accompli before haggling over price — might be more cynical, but it is not substantially more complicated.

The reality, though, is much messier. Teams frequently give an agent a mandate to sell their own player, in order to retain a degree of negotiating power. Often, different agents will be given mandates to sell players to different countries: One will do the deal if an Italian team is interested, someone else if it is a Spanish club. Those mandates can then be traded and sold between agents.

As soon as a talented player emerges, a suite of agents will typically descend on him, offering exclusive access to a particular team or league, or simply an ability to negotiate a better deal. Sometimes players sign multiple agreements with multiple agents, based on nothing more than promises.

Most of those involved in recruitment accept this as the way things are, and the way they have always been across the world, though many find it especially difficult to untangle deals to take players out of South America. The sporting director at one major European club, though, believes the problem has become much worse since FIFA moved to deregulate agents in 2015. “Now, you can basically do anything you like,” said the director, who spoke on the condition of anonymity because he was not authorized to address the issue publicly.

It is precisely that sort of free-for-all that engulfed Caicedo. For much of his nascent professional career, he has been represented by Kancha, an Ecuadorean agency with a roster of young players and a cohort at Independiente. As clubs’ interest in him grew, though, so too did interest from agencies, eager to profit not only from his promise but also from teams’ comparative inexperience in buying players in Ecuador.

Members of the Caicedo’s family — he is the youngest of 10 siblings, and has 25 nephews — were inundated with offers from agents seeking a mandate to sell him. Those close to the dealings, though not authorized to speak on the record about private business arrangements, said they believed that relatives had reached agreements with two of them: a German-based firm, PSM Proformance, and a company in Argentina. PSM Proformance did not respond to a request for comment.

All of a sudden, there were three agencies — including Kancha — claiming to speak for Caicedo, to have the power to do a deal. Independiente, the club that had nurtured him, was effectively rendered irrelevant in the sale: It will receive roughly the same fee regardless of which agent strikes a deal, and is expected to ask for a clause that will bring the club a 30 percent cut on any future transfer, too.

But if his club is unaffected, the same cannot necessarily be said of Caicedo. With multiple agents not only touting him across Europe but also peppering the news media, in Ecuador and farther afield, with tips about his potential destination, many clubs that had been enticed by Caicedo’s enormous promise chose to walk away. Manchester United and Milan both decided not to become embroiled in a situation they deemed too knotty to unravel.

Others stayed the course. Brighton — currently considered his most likely destination — had the advantage of a pre-existing relationship with Independiente and Kancha, having signed a player from both in 2018. Caicedo will get his move: His talent, ultimately, guarantees that.

What concerns those who have watched him flourish over the last couple of years is whether it will be the right move, for the right reasons. Caicedo’s rise, so far, has been unexpectedly, almost impossibly smooth. Being exposed to the perils of the transfer market, though, means the road ahead is littered with obstacles. He has been found. The risk now is that he might yet be lost.