Having won the treble for themselves, Canberra FC now want to win something for Canberra.

Canberra FC will play Adelaide club Campbelltown City in the quarter-finals of the national premier league at Deakin Stadium on Saturday.

They have the chance to turn their already three trophies into a fourth by adding the national championship to the premiership, league championship and Canberra FFA Cup they've already won. 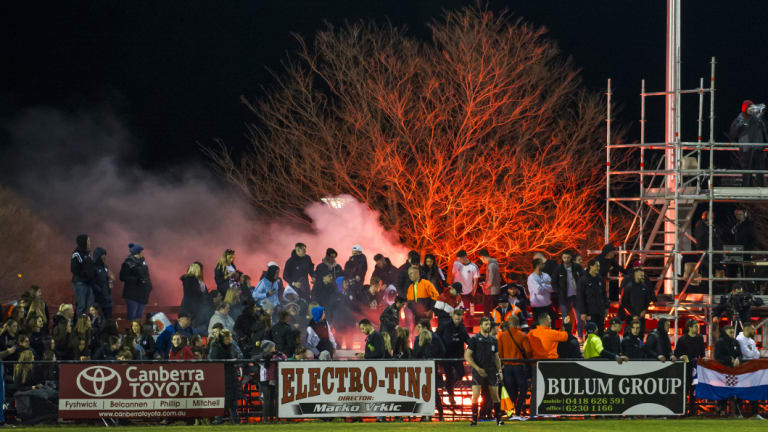 Canberra FC got the title and might get a bit more after this flare was lit in the second half.

FC coach Paul Macor felt if they won the national title then it would gain them automatic entry into the final 32 of next year's FFA Cup.

That would mean they didn't need to qualify through the Canberra leg of the Cup competition, which in turn would mean two Canberra teams could potentially compete in the national knock-out comp.

Canberra teams are yet to win a game in this final stage.

Qualifying for the FFA Cup is quickly becoming the main focus of ACT clubs, giving not only themselves but their players exposure on the national stage.

"It will be a great incentive for Canberra because if we win the NPL FFA we go in automatically in the last 32 [for the FFA Cup]," Macor said.

"So that means that we don't need to go for the FFA Cup in Canberra and possibly have two Canberra teams in there. I think that's the way it works."

One of the keys for FC will be striker Michael Mensah, who almost scored from a nicely taken overhead bicycle kick, only for Canberra Olympic goalkeeper Ange Konstantinou to save it.

Mensah started the season as an assistant coach before Macor called him into the line-up to help lead their attack.

"When I was here two years ago Michael was a defender and to his credit I said to Michael, 'With the defenders we've got in the squad here your time on the pitch will be very limited. I could really use you on the coaching staff', because he's played at the highest level," Macor said.

"With injuries and what not, we used him and we used him wisely up front. He's been magic."