Aaron Judge is one of the most talented and recognizable players in baseball. A larger-than-life outfielder with a toothy grin and a devastating swing, Judge was the American League rookie of the year and the runner-up in most valuable player voting in 2017, and his was the best-selling jersey in Major League Baseball in each of the last two seasons.

He is playing for the most valuable team in a sport that paid out a waterfall of big contracts this off-season: Bryce Harper and Manny Machado signed free-agent contracts worth a combined $630 million, and teams committed $1.75 billion in contract extensions, including an eye-popping $360 million in new money over 10 years to Mike Trout of the Los Angeles Angels.

Judge’s cut for the 2019 season, which gets into full swing on Thursday against the Baltimore Orioles? A hair above $684,000.

Few would quibble with that salary, which is 11 times higher than the median household income in the United States in 2017. But in a sport that took in about $10 billion in revenue last year, complex questions about its economic structure are emerging amid rising tension between team owners and the players’ union: As teams increasingly rely more on younger, cheaper players and shift their free-agency priorities, can young stars like Judge expect to earn what their predecessors did? And even more, why aren’t players earning the most money during their most productive ages?

“Something needs to change,” Judge, who will turn 27 in late April, said recently, adding, “They have to find a fair way to evaluate players at a younger age.”

He is far from the only superstar to make well below his market value: In 2017, the Chicago Cubs’ Kris Bryant, then 25, earned about $1 million after winning the 2016 National League M.V.P. Award and a World Series title; the Mets’ Jacob deGrom, who agreed to a contract extension on Tuesday, reluctantly accepted a $607,000 salary for 2016, when he was 28, after being the N.L. rookie of the year in 2014 and helping the Mets to the World Series in 2015.

Carlos Correa, a 2015 rookie of the year and an All-Star in 2017, made less than $535,000 in each of his first three seasons with the Houston Astros before receiving a discretionary raise to $1 million for 2018.

“Players like Aaron Judge or like me or Kris Bryant contribute so much to teams before reaching arbitration, while making the major league minimum salary, when we’re producing like players who are making much more,” said Correa, 24, a shortstop who will earn $5 million this season after going through salary arbitration for the first time. 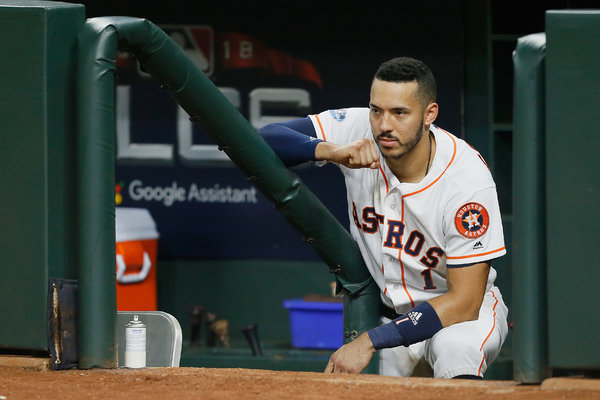 The current salary structure has been in place for decades. Teams control players’ rights for their first six major league seasons, generally owing them at least the minimum salary ($555,000 in 2019) for the first three before players become eligible to negotiate their salary through salary through the arbitration process — which Judge will enter before next season — for the next three. After that, they can sign with any team in the open market.

Such low salaries used to be more palatable for players, given the promise of a big payday once they reached free agency. But that promise is drying up: Fewer teams are competing (eight teams had at least 95 losses last season, the most in history); clubs are more wary of aging players’ production dropping off since drug testing began; the luxury tax has deterred some spending; and analytics-driven front offices are evaluating players in similar ways, driving down bidding wars for players.

The free-agent market has shifted drastically the past two off-seasons as teams have become more leery about handing out lengthy contracts to older players, leaving younger ones like Judge feeling squeezed on each end.

“You can’t play both sides,” said the Yankees slugger Giancarlo Stanton, 29, who signed a 13-year, $325 million contract extension with the Miami Marlins in 2014 after one season of arbitration. “You can’t say, ‘Oh, break in and we’ll see how they can do,’ and once they’re proven, ‘Oh well, they’re old now.’”

Stanton said Judge could not expect to be rewarded in free agency the way similar players had been in the past. “He has to be more aware and knowledgeable to the situation than I had to be, because it has changed,” Stanton said.

Yankees General Manager Brian Cashman said the team’s pre-arbitration salary formula is based on players’ service time and performance. “Its strength is built on its consistency,” he said. “We’ve stayed disciplined to it.”

Keeping salaries down for Judge and other young standouts — like the 26-year-old catcher Gary Sanchez ($669,800), the 24-year-old third baseman Miguel Andujar ($617,600) and the 22-year-old second baseman Gleyber Torres ($605,200) — allows the Yankees to spend elsewhere to fill other roster holes and stay within a budget. (As things stand now, the Yankees’ 2019 payroll will be over the luxury tax threshold of $206 million.)

But few players are as valuable as Judge. In 2018, when he earned $622,300, he was actually worth $71 million to the Yankees, according to Block Six Analytics, a firm based in Chicago. Block Six devised a metric called Revenue Above Replacement, which attempts to calculate a player’s value to a team based on factors like merchandise sales, attendance, social media influence and television ratings.

By Block Six’ estimates, Judge will still be worth at least $33 million a year in his early 30s, despite natural decline in his on-field performance.

But Judge, who received a $1.8 million signing bonus as a 2013 first-round pick, did not reach the major leagues until age 24, having spent three years playing college baseball and parts of three in the minor leagues. He will not become a free agent until his age-31 season, and teams might not be willing to hand out a Machado- or Harper-level contract at that age.

His teammates, though, feel he deserves that type of paycheck now.

“What people need to realize, say we’re taking Judge for example, he’s one of the best, if not the best, at what he does,” Yankees starting pitcher James Paxton, 30, said. “If you look at the best in the world at what they do, what are they compensated? A lot.”

Next season, Judge is likely to become a multimillionaire through arbitration. That route offers little long-term security, as each deal lasts just one season. Given that and the uncertain nature of free agency, the sport has gone through a small explosion in contract extensions this spring. The Yankees could offer Judge a huge extension during arbitration, as they did with Luis Severino, 25, last month, but such a deal would most likely not come close to what Machado and Harper earned by virtue of reaching free agency at 26, an abnormally young age.

The players’ union has argued that teams have wielded analytics to justify paying free agents less money, ignoring qualities like leadership and experience.

“The suggestion that all players at a particular age are falling off a cliff is an excuse being used to drive down player salaries,” Tony Clark, the executive director of the M.L.B. Players Association, said.

M.L.B. has labeled it a distribution problem. Dan Halem, the deputy commissioner, said the players’ portion of revenue had been relatively consistent over the past decade, arbitration salaries had risen and the top-earning free agents were taking away from the rest.

“It’s pretty easy to say, ‘Let’s pay the younger players more and let’s continue to pay the free agents what they’re getting paid,’” Halem said. “That system doesn’t work for us because the overall amount going to players hasn’t changed, it’s just being distributed among free agents differently.

“There’s salary inequity among players, in that the superstars are getting more and more, and other free agents who are not valued the same way by clubs are getting less.”

M.L.B. and the players’ association said they were open to discussing the compensation structure in negotiations expected to begin sometime after opening day. Some players have suggested starting arbitration or free agency sooner in players’ careers.

Clark said the union would consider all options to properly compensate players of all experience levels. Halem said M.L.B. would listen as long as the cumulative spending on players remained “at the historical norm.”

In the meantime, Judge remains an exceedingly valuable superstar making vastly less than he is worth to his team. He said the Yankees had not broached the subject of a potential extension with him yet. Cashman said it was premature to comment about Judge’s future with the Yankees beyond his remaining four years of team control.

“We’re excited by who he is, what he’s done and what we think he’s going to continue to do,” Cashman said.

In the clubhouse, the business of baseball has come up a lot in conversation among players, including Judge. “Hopefully we can make some changes to get these guys paid more when they’re worth the value,” pitcher C. C. Sabathia, 38, said.

Asked what he thought Judge was worth, Stanton, his corner outfield partner, grinned.

“Definitely not very many people should be making more,” he said.