Aaron McInnes was supposed to have hung the boots up for good after last year’s Canberra Raiders Cup grand final win.

But when injury and illness left the Queanbeyan Blues needing a bit of help in the forwards, McInnes traded his LeagueSafe officer shirt for a jersey and ran out for one last hurrah – at least for now. 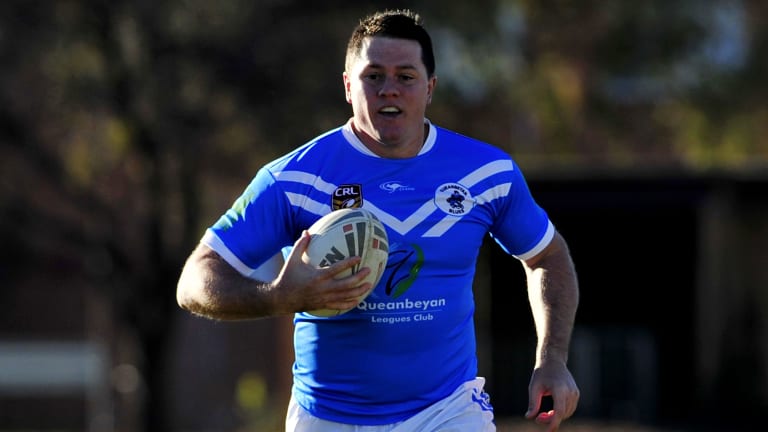 Aaron McInnes came back for one last hurrah.

Horrible conditions threatened to see the game called off during the second half but the Blues took it in their stride to beat the Gungahlin Bulls 36-16 at Gungahlin Enclosed Oval on Sunday.

Referee Adam Williams opted to take the sides from the field after 51 minutes as flashes of lightning lit up Gungahlin Enclosed Oval and thunder rolled around the city.

The referee blew time off and pointed straight to the dressing rooms, deeming the conditions unsafe as the players trotted off the park and spent 11 minutes in the sheds.

"We had some guys pull out late from injury and stuff like that so we had to rustle up a few players. We had Aaron McInnes, he hasn’t even trained once this year, he had to jump in there just to fill a spot for us," Blues captain-coach Terry Campese said.

"He did a pretty good job actually, it was good to see. Normally he is just our LeagueSafe officer, so we had to register him before the game.

"I think he might be keen to [keep playing]. It’s hard, next week we will have the full-strength team back and everyone will be back on board.

"Ilaisa Ngata and Adam Misios missed out, and big Aidan Woods called in sick [on game day]. We will have everyone back on board next week. I think we’re pretty good with our injuries in reserve grade so we’re going pretty well for numbers at the moment."

The Blues enjoyed a dream start with a try in the opening exchanges through Larry Manu and struck down the other edge soon after through Frankie Fainifo.

The Bulls hit back midway through the first half and trailed 20-10 at half-time, but their momentum was halted 11 minutes into the second half when both sides retreated to the rooms.

The break seemed to work in favour of the visitors as they added two tries in the next six minutes to open up a gaping margin, with Jake Wheeler starring at fullback in the absence of Adam Misios.

"We’re pretty fortunate that some of the players we’ve got play a number of positions. [Wheeler] scored four tries last week at centre," Campese said.

"I think that might be his permanent role at centre to be honest, the way he has been playing there. He is great defensively and he is quick on his feet.

"He had to jump into fullback there for us and did a good job. We’ll have to look at the tape and see what we do for next week."