The Wallabies fan who abused a number of Australian players after the team's loss to Argentina said on Monday he was "distraught" and had no idea on Saturday night of the personal tragedy Lukhan Tui had been dealing with.

The man, who Fairfax Media is choosing to not name, will not face sanction for the incident, which marred an already bitter loss to Argentina on the Gold Coast.

He told Fairfax Media he did not want to comment publicly on the matter but said he was "shell-shocked" and "distraught" in the aftermath, adding that he had no idea Tui had lost his stepfather three days prior and that his mother and young siblings were in the crowd. 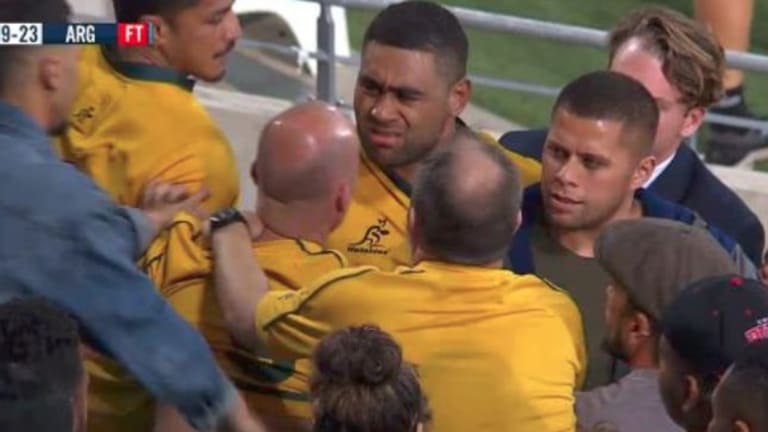 Ugly: Lukhan Tui gets in an altercation with a Wallabies fan at Robina.

The man said he had not been contacted by Rugby Australia, Queensland Police or Tui and had not reached out himself to make amends.

RA put the issue to bed on Monday afternoon, releasing a statement saying that Tui, the Wallabies' up-and-coming young flanker, did not want to take the matter further.

"This incident was not something you want to see at any sporting event. Emotions were running high after the match on Saturday night and I understand why Wallabies fans are frustrated after a result like that," RA boss Raelene Castle said.

"Two fans came into the area where players families were gathered and were arguing and using offensive language in criticising the players over their performance. One of Lukhan’s young family members was physically caught up in this exchange and this prompted the reaction from Lukhan.

"Wallabies team management have been in dialogue with Lukhan since the incident and he has indicated that he does not wish to pursue the matter any further and therefore no further action will be taken by Rugby Australia." 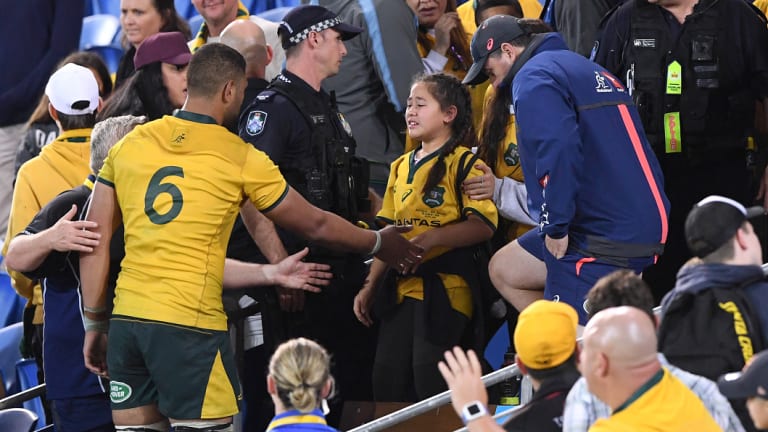 Unsavoury: Lukhan Tui consoles his sister after the incident

It is understood that footage showed that Tui's younger sister was knocked down during the incident and that Tui reacted angrily. The 21-year-old and the Sydney-based man grabbed at each other before being separated by witnesses.

Tui is in the midst of planning his stepfather's funeral and supporting his mother and younger brother and sister and wanted to move on from the distraction as fast as he could.

It is understood he still plans on taking a few weeks off to look after his family, which means he will miss the Wallabies' two-Test tour of South Africa and Argentina.

Castle said the incident was the first of its kind in Australian rugby and would prompt RA to review its security measures.