ACT Brumbies coach Dan McKellar says his side blew a golden chance to resurrect their Super Rugby season, slamming them for a "passive" start against the Argentian Jaguares on Sunday.

The Brumbies put in one of their worst performances of the season, falling to the Jaguares 25-20 at Canberra Stadium to finish a disastrous round for Australian teams. 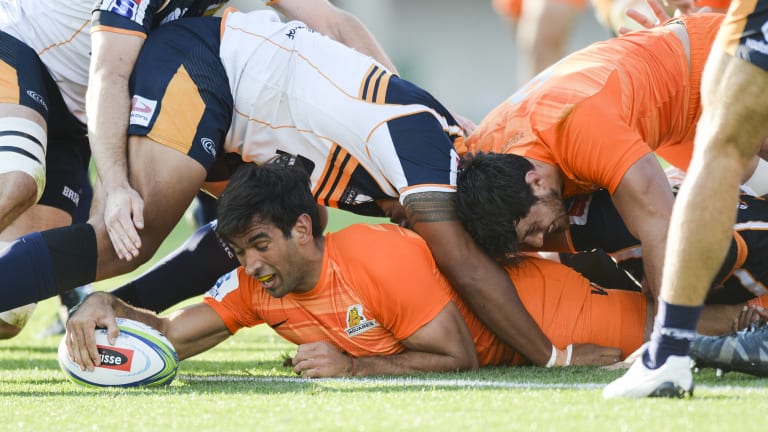 The Jaguares proved too strong for the Brumbies at Canberra Stadium on Sunday.

The Brumbies had an opportunity to close the gap on their Australian rivals after the NSW Waratahs, Queensland Reds and Melbourne Rebels lost their games earlier on the weekend.

But instead of gaining ground, the Brumbies failed in a frustrating and error-riddled performance.

"We had an opportunity tonight with a few other teams in the conference (losing)," McKellar said. "We don’t talk about that at all, but now the game is done it is an opportunity lost.

"I thought our first 30 minutes was passive, just wasn’t good enough. The last 10 minutes of the first half we managed to get possession and build pressure and maintain pressure and we scored two tries.

"It's very frustrating, what we’ve spoken about in our reviews… building and maintaining pressure and valuing possession and we just didn’t do that. We turned over way too much ball tonight and it cost us the game."

It won't get any easier for the Brumbies who host the Canterbury Crusaders on Saturday – a team they haven't beaten since 2009 – and Australia's losing streak against Kiwis teams now sits at 35 games.

They'll need to improve after dropping off the pace against the Jaguares, slipping behind 13-0 and then struggling even when they had a one-man advantage.

Jaguares winger Emiliano Boffelli was sin-binned in the second half and opened the door for the Brumbies to steal the lead for the first time in the game.

The Brumbies were their own worst enemy for most of the game but it was a horror 10 minutes with off the field that proved the difference.

Boffelli was sin-binned in the 48th minute for tackling Henry Speight in the air. What should have proved a turning point for the Brumbies just reinvigorated the Jaguares.

While they were a man down the visitors enjoyed 70 per cent possession and remarkably scored a try on the left wing – the position they were missing.

Boffelli returned to the field with 20 minutes to play and rubbed salt in the wound by scoring the match-winner in the 71st minute.

Yellow cards usually prove game-changers but it spurred on the Jaguares as held on for victory, becoming the first team in Super Rugby history to win their debut match in Canberra.

The Brumbies have not won consecutive home games since 2016 and skipper Sam Carter admitted it wasn't good enough.

"That’s what happens when you don't take your opportunities when you get them and don’t build enough pressure," Carter said.

"We knew they were going to come out pretty hard but we were asleep that first 20 minutes and they made us pay.

"We needed to put an 80-minute performance together and we looked good in patches but let ourselves down in other areas."

It was all the Jaguares early and their dominance was rewarded inside five minutes when centre Matias Orlando barged over after 18 phases of sustained pressure.

The Brumbies just couldn't get their hands on the ball and the visitors were on the board again when Rory Arnold gave away a high tackle penalty and Nicolas Sanchez slotted home from 40 metres.

The Jaguares enjoyed all the territory early and Sanchez converted another penalty to open a 13-point lead after 15 minutes.

The Jaguares had an enormous 80 per cent possession in the opening 25 minutes, while the Brumbies had missed nine tackles and kept coughing up the ball when they had it.

David Pocock was marched 10 metres for back chat as the Brumbies' frustration grew but after half an hour the onslaught finally ended.

A string of penalties took the Brumbies inside the Jaguares half and after peppering the line, flyhalf Wharenui Hawera sent it wide for Tom Banks to score in the corner.

Carter turned down a penalty shot just two minutes before half-time but Banks missed touch in a coach-killing moment.

Luckily for the Brumbies fullback they got one more crack and Hawera put through a grubber for Banks who showed lightning speed to redeem himself with a second try in the corner.

It was only goalkicking that separated the sides and with Hawera missing both conversionsas the Jaguares took a 13-10 lead into the sheds.

Following the sinbin moment the Brumbies almost scored immediately but the Jagarues secured a turnover on their line and went 100 metres for a 14-point try.

The Brumbies struck back through Chance Peni in the 66th minute but Boffelli crossing for a soft try late showed the story of the night.