The ACT Brumbies will play five games under Friday night lights in 2019 and one afternoon fixture in Canberra, while the June break has been scrapped to accommodate the Rugby World Cup.

Super Rugby organisers have announced the 2019 draw and the Brumbies will open their season against the Melbourne Rebels at Canberra Stadium on February 15. 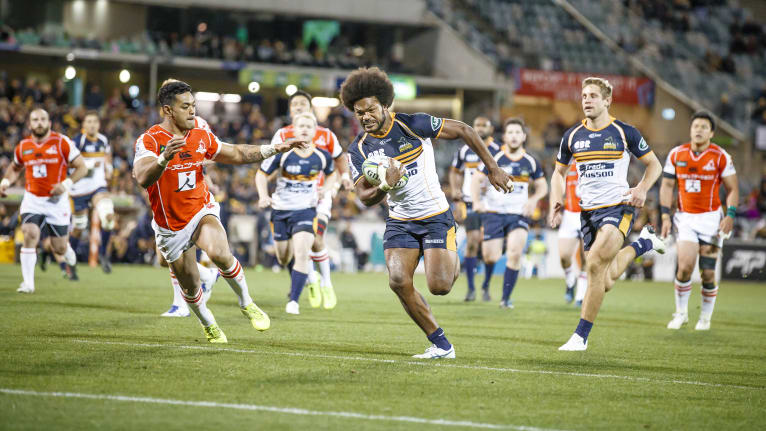 The Brumbies will play five games under Friday night lights in 2019.

The Brumbies will host eight home games and play four of their opening five home and away matches under Friday night lights, including a blockbuster against arch-rivals NSW Waratahs in Canberra on March 15.

They'll avoid the Otago Highlanders in the New Zealand conference but face the Wellington Hurricanes, Canterbury Crusaders and Waikato Cheifs on the road.

The Brumbies will play just one game in South Africa, against the Cape Town Stormers, before facing the Jaguares in Argentina, while they don't meet the Durban Sharks.

The season has been brought forward by two weeks, which means Brumbies fans should only have to brace chilly conditions at three home games.

The Canberra Stadium afternoon fixture will again be against the Japan Sunwolves on May 12 and there will be no June Test window because of the World Cup.

The Brumbies regular season will conclude when they host the Queensland Reds on June 15, with the Super Rugby final set for July 6.

Round 3 (A): Wellington Hurricanes v ACT Brumbies at Wellington Stadium on Friday March 1 at 5:35pm AEST.

Round 6 (A): Queensland Reds v ACT Brumbies at Suncorp Stadium on Sunday March 24 at 3:05pm.

Round 8 (A): Canterbury Crusaders v ACT Brumbies at Christchurch Stadium on Saturday April 6 at 3:15pm AEDST.

Round 12 (H): ACT Brumbies v Auckland Blues at Canberra Stadium on Saturday May 4 at 7:45pm.