Adelaide's injury crisis has worsened with captain Taylor Walker ruled out of action in coming weeks.

Walker will miss Friday night's fixture against the Western Bulldogs and also following matches because of back and glute muscle problems. 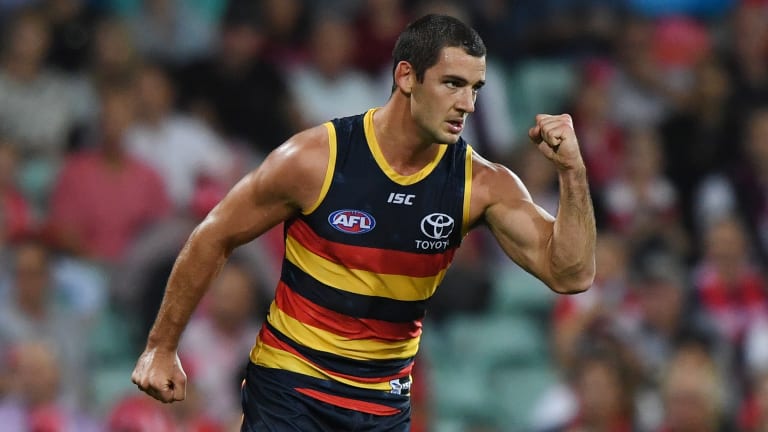 The Crows could also be without All-Australian midfielder Matt Crouch and defender Luke Brown on Friday night as they battle to recover from soreness from last week's game.

Utility Riley Knight (hamstring) has been ruled out of making his return but ruckman Sam Jacobs (back spasms) has been cleared to play in the Adelaide Oval fixture.

But Walker is set for another stint on the sidelines as the Crows, who had 14 players on their injured list this week, attempt to get their skipper fully fit.

Walker missed the season-opener because of a foot injury and also the club’s round eight match because of a hamstring issue.

After reporting tightness in a glute muscle during last week’s loss to Port, the Crows have opted to spell Walker.

‘‘The reality is that Tex’s preparation has been pretty interrupted right from pre-season,’’ Adelaide assistant coach Matthew Clarke told reporters.

‘‘He has had a series of niggles that have come up along the way.’’

Clarke said Walker wouldn’t be sidelined for an extended period but ‘‘a time that allows him to be physically able to perform’’.

Club champion Crouch and half-back Brown were both suffering soreness, with their recovery from Thursday training to determine if they’ll front against the Dogs.

Meanwhile, Fremantle coach Ross Lyon is optimistic Michael Walters and Nathan Wilson will return for Saturday night's clash with Sydney at the SCG.

But midfielder Stephen Hill has been ruled out for a second straight week with a quad injury.

Walters has missed two games with a kneecap injury, while Wilson missed last week's 30-point win over St Kilda with a back complaint.

"Walters and Wilson, [we are] really optimistic on," Lyon said.

"If they get through training, which we think they will, they'll play.

"[Hill] hasn't progressed as quickly as we'd like. It's just a fascial injury, but that high-end range of speed and movement he's just been restricted on.

Sydney have ruled out star forward Lance Franklin for a fourth straight game because of a bruised heel.