AEW’S Nyla Rose made history on Wednesday by becoming the first-ever transgender wrestler to win a major title.

“The Beast”, 37, became the first openly transgender woman to sign with a major pro wrestling promotion when signing with AEW last February. 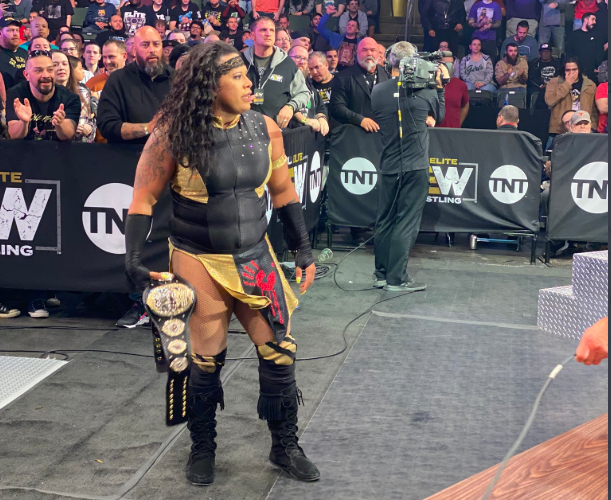 Now following an epic match against Riho on Dynamite, she has written her name into the record books at the show in Austin, Texas.

However, her moment of triumph was crowned with an embarrassing gaffe from former WWE commentator Jim Ross.

As the emotional Rose held up her newly-won belt, Good ‘Ol JR said on commentary: “Nyla Rose is the king of the mountain.”

Plenty of viewers quickly spotted the slip-up – but we’re sure the champ will not be bothered in the slightest after overcoming huge adversity to get where she is.

Rose has faced numerous critics and online trolls as she continues to make waves in the AEW.

But she previously told the Ring The Bell podcast that it is down to people not knowing what to do with themselves when she makes their “pants tingly”.

She said: “I feel like a lot of people are kind of projecting their own unhappiness on to me, and using me as an outlet. A punching bag, if you will. It sucks, and please stop doing it.

“I celebrate Christmas. You can give me that for Christmas, just effing stop. But I get it.

“Some people are a little bit confused. Because for some reason a lot of male fans when they watch wrestling, they judge how good it is by how funny their pants feel.

“So when I come on the TV and their pants feel tingly, they get a little confusing. I get that. But it’s ok.

“It doesn’t change anything about you that doesn’t want to change. You don’t have to have some internal conflict struggle.

“But if you want to talk about it we can just please stop calling me names.”

WrestleMania 36 takes place at on April 5, 2020 at the Raymond James Stadium in Tampa, Florida.

Discover blue skies and sunshine, a sparkling waterfront, world-class chefs, family fun, and a century of Cuban culture – all in Florida’s most diverse travel destination.

In Tampa Bay, the hospitality is as warm as the weather. Treasure awaits.

For more information on accommodation and places to visit during WrestleMania week please visit www.visittampabay.com.