The head had been sacrosanct in football. Choose to bump when you could have tackled, hit the head and you are in trouble. But not now. Not if that head is Shaun Higgins’.

Hawthorn's Ryan Burton clattered into Shaun Higgins with a bump that knocked Higgins into tomorrow. Higgins was taken from the ground on a stretcher and then by ambulance to hospital where he spent the night. He needed plastic surgery to repair his face for his lip was so badly split open. 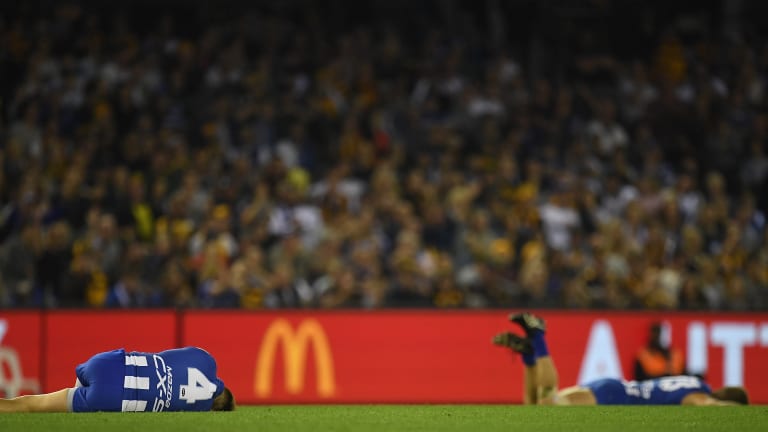 Shaun Higgins and Ed Vickers-Willis were both knocked out on Sunday.

The North player had the ball when Burton saw him and decided to bump. He could have tackled but didn’t.

The AFL’s Match Review Officer Michael Christian ruled Burton “executed the bump with contact to the body and could not have reasonably foreseen a clash of heads between the players.”

The current AFL Tribunal Guidelines specifically address this issue of the bump and head clashes and state "head clashes may be considered a reasonably foreseeable consequence arising from a bump. Accordingly, players who elect to bump, resulting in a head clash, may be liable for a sanction if the level of impact is above the threshold required to constitute a Reportable Offence.”

To be clear, Higgins was concussed, spent the night in hospital and needed surgery. So we can cover off on the level of force threshold.

Christian decided it was not excessive, he didn't travel far and didn't leave the ground. So from the distance he went and how hard he hit him he wouldn't have thought the heads would whiplash and hit. That's hard to accept.

He also had an alternative – he could have tackled.

The AFL changed the rules after Lindsay Thomas bumped Ben Reid in 2014 and the then Match Review Panel ruled, as Michael Christian did on Monday, that the head clash was accidental.

The AFL introduced the idea of the foreseebility of a head clash from the whiplash effect of a bump to the body to clarify this idea of accidental contact.

Christian also let Mark Le Cras off last week, for a bump that concussed Ben Ainsworth, because of the same logic that head clashes are accidental. I disagree with him on both.

You can have accidents in football, they happen all the time, but when you know that clashing heads is common from bump it is no longer accidental, it is likely.

One of the changes the AFL introduced in the off-season was to allow an appeal of their own tribunal if they disagreed with a decision.  Steve Hocking has to sign off on the MRO decision. He shouldn't have. The AFL should appeal the Burton decision.