Just how far-fetched is it to think one day an AFL team could be permanently based in Shanghai? 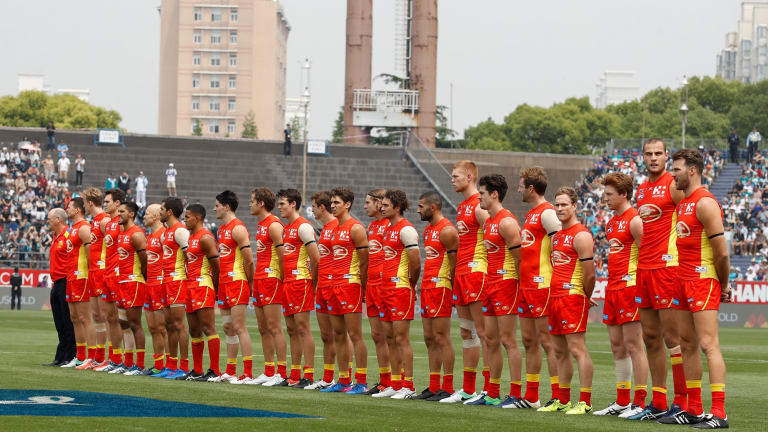 Gold Coast take to the field in Shanghai last year.

After Port Adelaide and the Gold Coast played the first ever game in China for premiership points last year, they were met with a typical chorus of naysayers. Hawthorn president Jeff Kennett didn’t mince his words when he described it as “an absolute waste of time and money”.

Undeterred, Port and the Gold Coast are heading back to do it all again in Shanghai this weekend. And the idea that the AFL could one day expand beyond our national shores may not be as fanciful as many might think.

Shanghai is the biggest city in China, home to more than 25 million people. China has a population of over 1.3 billion. Shanghai is also home to several big Chinese businesses who just might be interested in introducing themselves to the Australian market by leveraging a sponsorship with a club in Australia's most popular football code.

And if only a quarter of a per cent of all those living in the greater Shanghai area became members, they'd end up with more than 60,000, far from the worst membership tally in the AFL. The team would not need to be the biggest sport in Shanghai, just big enough to establish itself.

The different time zones need not be an issue. Shanghai shares the same time zone as Perth. Logistically, it would be tough. Travelling from Shanghai to Australia every second or even third week would be draining, but then again, the AFL is constantly floating the idea of changing the mechanics of the fixture, so logistics alone is no reason to kill off the notion.

Of course the AFL has played with the idea of permanently setting up shop overseas before. Last year it was reported that in 1988 the VFL, led by chief executive Ross Oakley, briefly toyed with the idea of relocating a Melbourne club to Los Angeles.

More recently, the AFL has been investigating the possibility of playing a game for premiership points in India, home to more than a billion of the world’s inhabitants.

The idea driving these overseas explorations is that the domestic market may not be big enough to support the plethora of elite, professional sports already fighting for our attention in Australia. Many sports administrators wonder where the money will come from. Some believe overseas markets might be the answer.

Of course, there are those that just can’t see it ever happening. And if it does happen, they refuse to believe it could work. And, in fairness, they may be right.

But then again, they might also be the same people who said Twenty20 cricket would never work. After all, if you said 50 years ago that a new game of cricket that was only 40 overs in length and played over a few short hours would be taking the cricket world by storm today, you’d be laughed out of town.

The ridiculous can become reality in the blink of an eye.

In 2011, Kevin Sheedy called for a game to be played in China for premiership points. Many said he was crazy. It happened in 2017.

Last season he called for each game of the opening round of the AFL season to be played overseas. Who knows, it just might happen one day.

So what does the future hold? Could it be that one day, many decades from now, we could have an AFL competition that includes teams from China, India and America? Perhaps they’ll be the biggest franchises in an AFLX world competition.

With new and advanced technology driving a rapidly changing world, it would be a brave person to try to guess what the sporting landscape will look like 50 years from today.

It might look just as it does now. But the more likely prediction is that things will be different.

Just how different is anyone’s guess.

Sam Duncan is a lecturer in sports media and an Age columnist.