If winning games is your sole objective, then Melbourne and Collingwood have been punished for their rises to the top four, while Richmond fare only marginally better on degree of difficulty.

Conversely, if clicking turnstiles, decent television audiences and dollars is your measure of a "good draw," then those clubs have been handed largesse. They should make plenty of money, via marquee matches and return bouts against heavyweights. 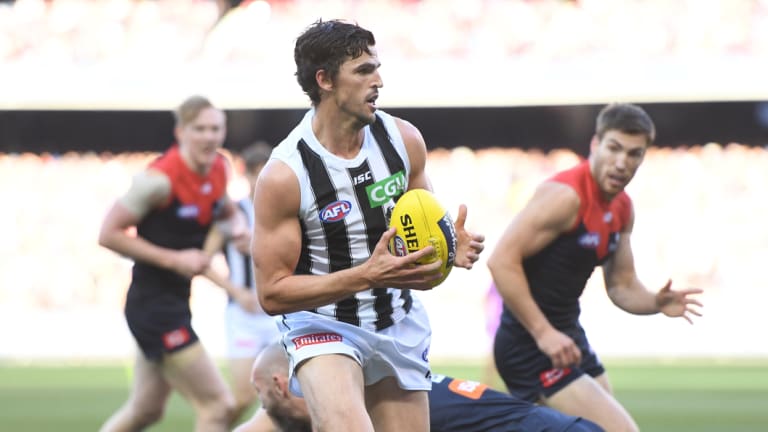 The Pies and the Demons have a tough fixture in terms of their on-field opponents.Credit:AAP

The reverse situation applies equally to Carlton, St Kilda and Gold Coast. Those clubs have been given the equivalent of 48kg in the Melbourne Cup – the AFL handicapper has handed them friendly return games, which is to say they have been scheduled to play each other twice.

But none of the bottom three from 2018 – or Fremantle – will play in the prime slot of Friday night in 2019, and by and large, they will not play in many event games.

St Kilda are paying a price for their poor on-field results and fiscal struggles. Having lost Good Friday to Essendon, the Saints have signed up to be the Shanghai Saints (as the home team for Port Adelaide's China enterprise) and have been shunted to Townsville to play away to the Suns. At least the China game will shore up their finances.

It is a staggering measure of Carlton's fall at the box office – based entirely on performance, not underlying support – that they will play only two games at night, when the television audiences are typically larger and one of them is the season-opener against the Tigers, a safe bet to draw a monstrous crowd.

Carlton's draw, indeed, is a correction for last year's clanger by head office, when the Blues were inexplicably fixtured to play on no less than four Friday nights, plus the season opener, in a schedule that clearly dragged down ratings.

Collingwood, meanwhile, are the other stand-out correction, in a different direction. The Magpies were handed both an "easy" on-field and unappealing off-field fixture in 2017; as the 13th side in 2017 (like Richmond the year before), they played lower teams Carlton, the Brisbane Lions and Fremantle twice, while often finding themselves playing on Sunday afternoons at twilight.

In 2019, the Magpies will be the most watched team on Friday nights, with seven in that coveted free-to-air slot. Their marketing department will like the fixture, which also sees the Pies hosting Melbourne on the Queen's Birthday for the first time since the match became an annual feature.

But, as mentioned, they and the Demons have not fared so well on the basis of "who" they play – judged by ladder position and perceived prospects for 2019.

Indeed, it is debatable which of Collingwood or Melbourne has the tougher fixture. The Pies play their nemeses West Coast, Richmond and Melbourne twice – all three of their fellow top-four teams from last September, plus a return game against the highly-fancied Essendon.

The Demons cop the same arrangement against all three top-four sides, in addition to two games versus Sydney.

Essendon are the exception to the rule that teams that miss finals don't get prime positions for ratings and/or attendances, having added Good Friday – albeit a North home game – to their enviable portfolio of event games.

Hawthorn and Geelong have reasonable draws, footy-wise. It is interesting to wonder whether the Hawks would have a Melbourne-like tough fixture on paper had they beaten the Dees in September.

Predictions about tough draws can only be made on the basis of the previous year's results and the potential for improvement. Given what Richmond managed in 2017 and Collingwood in 2018, we should not discount a relatively unfancied non-finalist stunning everyone, while putative "contenders" (eg Adelaide this year) will fall away.

It is a draw that renders the weaker teams less relevant, while lending them a hand on the field, where it comforts the afflicted and afflicts the comfortable.