The confluence, in 1992, of a divorce, a couple of separations, "Squidgygate", a fire at Windsor Castle, and a toe-sucking financial adviser made for a bad year for the royal family. Out of it all, the Queen gave modern currency to the expression annus horribilis.

A quarter-of-a-century on, reigning AFL monarch, Gillon McLachlan, might be brushing up on his Latin. For if right royal stinker is too strong a description for the mid-season report, it can safely be said the AFL has had better half-years. 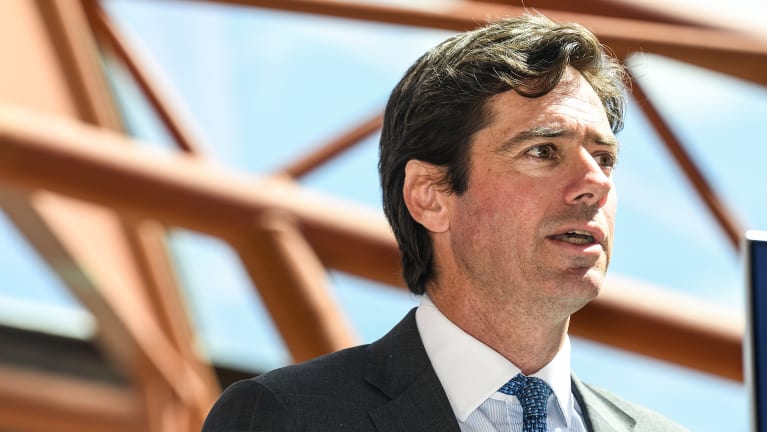 Some of this season’s problems, it must be said, have been beyond anyone’s control. Two of them have been inflicted by major international sporting events which have hurt the AFL in more ways than one.

In early April, the Commonwealth Games delivered a body blow. Apart from edging into the sporting limelight just as the season was getting started, the Games inadvertently did a job on one of the AFL’s major projects. As a result, the Gold Coast Suns’ season is in tatters and the bleeding goes on.

The last thing the expansion club needed was to travel to Cairns, Perth (for back-to-back games), Adelaide, Melbourne, Ballarat – and then China – in the first nine weeks. The schedule has undoubtedly contributed to the implosion that’s followed a promising start. This, in turn, has precipitated a damaging comparison of football cultures: Gold Coast vis-a-vis Tasmania.

A different sort of damage to the domestic code can be inflicted by an event as international as the festival of soccer currently underway in Russia. It’s not called the world game for nothing and, at present, the global aspect is on vibrant display everywhere you look. Well … everywhere except Optus.

It’s bad timing given the AFL is currently struggling with the look of the Indigenous game. While some current coaches and players are dismissing criticism as the misty-eyed bleating of old fogies, it’s more than a figment of pessimistic imagination. Congested football is too prevalent. Too many people are complaining about it. Scoring is stuck at miserable levels. Television numbers have dropped. The AFL has seen fit to assemble a committee to consider how the game can be more attractively played.

Greg ‘Diesel’ Williams, who may have played the game last century but who ‘saw’ it better than any footballer of his time, has recently spoken of the need for a different mode of umpiring. He said that when he watched his daughter play netball, he saw the laws of that game being strictly, even technically, applied. As a result, netball has maintained its essence and continued to be played without rule modifications. In football, there’s been a modern policy of ignoring free-kicks other than for the bleeding obvious. The game has thus been changed. And the chickens are coming home to roost.

If that’s the most concerning of the self-inflicted wounds, the most toxic is the stripping of any shred of independence from the match review process. Quite simply, this is outrageous. Perhaps the inexperience of first-year football boss, Steven Hocking, brought it on, but wiser heads should have prevailed.

That they didn’t, speaks either of arrogance or ignorance. If the game’s masters don’t care about providing a process that ensures trust, they’re taking the football public for fools. If they don’t understand why such a process must not have their hand on it, they could always look for other careers. The CEO and the commission both deserve censure over this failure.

Dustin Martin’s fortunate escape in the past week is the latest example of how Orwellian the process has become. An un-announced, in-house revision of policy for incidents involving contact with umpires, after two players had previously been suspended, and as the previous year’s Brownlow medallist stood in the dock, is … well, as they say, it is what it is.

Then there’s the goal-review system. There have been embarrassing errors, with umpires’ calls overturned despite lack of sufficient video evidence. It’s now clear the reviewers haven’t been adequately trained. Yet this is the seventh year in which a decision-review process has existed. Gillon McLachlan says the mistakes ‘piss him off’ but says the good in such a system outweighs the stuff-ups. I would quote a former AFL commission chairman to him regarding the errors and say: ‘Do something!’

The symptoms of annus horribilis are particularly evident in the game’s two expansion zones. The GWS Giants were tipped by many to win the flag but may miss the eight. And their home crowds have so far been horribilis. Meanwhile, Gold Coast are performing like a busted annus. A hard sell has just got harder.

Meanwhile, there’s the sixth state: one of the code’s four heartland territories. Tasmanian football is in distress and the one genuine fix is nowhere in sight.

No doubt the AFL gets a bum rap at times as football is about passionate tribes of winners and losers. Each weekend brings disgruntlement and ecstasy in equal measure. The poor blighters who run the show become an easy target.

Lately, though, the cracks have been widening. And there’s a good prima facie argument that a link exists between an annus horribilis and a modus operandi.