LONDON — After the unmasking of its state-orchestrated doping program turned it into a sporting pariah, Russia hardly quietly accepted its punishment.

Angered and humiliated, it has fought, so far unsuccessfully, to re-enter the international sports community through legal channels. But, American prosecutors and British government officials say, it went much further than that, actively seeking to undermine the Olympics it was barred from.

Just as it used the full might of the state in a cheating scheme that brought it now disputed medals at events like the 2014 Sochi Games, Russia unleashed some of the same forces to hack and disrupt the opening ceremony of the 2018 Winter Olympics in South Korea and the now-delayed 2020 Tokyo Summer Games, according to American and British officials.

Now, once again, the International Olympic Committee is left to decide what, if any, action to take against one of the largest and most influential countries in its movement, one that has time and again challenged its ideals.

According to the American and British authorities, operatives from Russia’s military intelligence wing unleashed a barrage of cyberattacks on the 2018 Winter Olympics and started operations against the Tokyo Games as part of a broader worldwide hacking campaign that also included attacks on a French presidential election and Ukraine’s electricity grid. 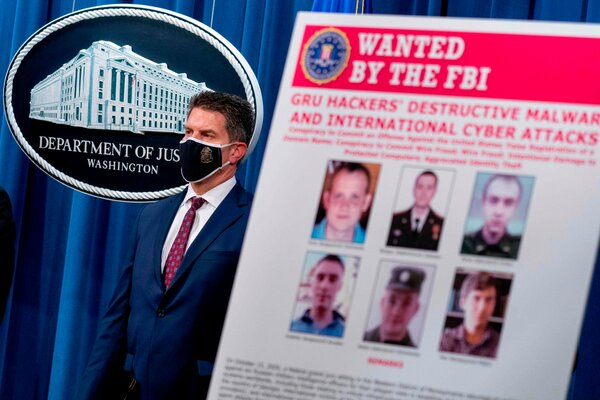 Russia denied the allegations, as it did when details of its doping program first emerged, and after attacks on other sporting bodies, including the global doping regulator.

A Kremlin spokesman, Dmitry Peskov, on Tuesday described the accusations as “Russophobia.”

“Russia has never carried out any hacking activities against the Olympics,” he told reporters in Moscow.

The accusations come as Russia tries to overturn the four-year ban from major international sporting events it received in December when experts at the world’s antidoping regulator found that Russian officials manipulated key data that would have allowed sports federations to finally identify the hundreds of athletes it helped to cheat.

For the I.O.C. and its president, Thomas Bach, the latest details of Russian malfeasance are likely to be a bitter blow. For years, the Olympic movement has stopped well short of punishing Russia with the most severe penalties, which would include barring any Russian athletes from appearing at the Olympics or participating in regional events.

On Monday, the I.O.C. was cautious in its first comments about the affair. Its statement did not mention Russia by name or specifically respond to the allegations.

In South Korea, the I.O.C. angered much of the global antidoping movement by allowing Russian athletes to participate even though its national Olympic committee, flag and national anthem were banned. A total of 168 Russian athletes competed under the designation “Olympic Athlete From Russia.”

Russia faced another ban in Tokyo, this time more severe than the one it received before the Pyeongchang Games. Russian athletes will have to prove they are clean from banned substances and not have links to any of the manipulated data from a discredited Moscow laboratory. And in Tokyo they will not be able to be a part of a team in the way they were in South Korea.

Travis Tygart, who heads the United States Anti-Doping Agency, another group that Russia tried to hack, said he was not surprised in the slightest by the latest developments.

He said Russia’s behavior “hasn’t changed one bit,” and the absence of meaningful punishment, in his view, has only emboldened Russia.

“The powers that be don’t have the courage to stand up to Russia even when they damage and maybe permanently damage the Olympic brand and the Olympic values,” Tygart said. “If a toddler keeps getting what it asks for and keeps disobeying the rules, why would they act differently?”

For the German fencer Max Hartung, who set up a German athletes’ representation group after the I.O.C.’s handling of the Russian doping scandal, the new accusations show how precarious even the biggest events can be. “If a big nation state wants to sabotage sports events there’s probably no means by which a sport event can defend itself from such a nation,” he said.

Russia’s efforts to disrupt the 2018 Winter Olympics started several months before the event, and gathered pace as the I.O.C. in 2017 considered barring Russia from the Games for its doping activities. Once the ban was confirmed, operatives from a unit of the Russian intelligence Main Directorate, usually referred to as the G.R.U., dug in, American prosecutors said.

The role of the spy agency described in the scheme bears some hallmarks to how the doping program operated, when officers from a separate organization, the Federal Security Bureau, the main successor agency to the K.G.B., took part in clandestine, middle-of-the-night operations to replace drug-tainted urine samples with clean ones at the Sochi Olympics.

In the Olympics hack, G.R.U. operatives sent emails to members of the International Olympic Committee, athletes and other companies posing as Olympic or South Korean government officials to trick the recipients into giving them access to key Olympic infrastructure. At one point, they hacked a company that provided time-keeping services to the Olympics, according to court papers.

With their trap set, Russian officers sent event organizers into a frenzy by targeting the opening ceremony of the Games, taking down internet access, disrupting signals, grounding broadcasters’ drones and taking down the official website, which prevented spectators from printing tickets required to attend the Games.

South Korea, which had spent billions of dollars to prepare for the Games, had to take drastic action as the cyberattack threatened to overwhelm the meticulously planned opening ceremony that was supposed to feature a deployment of drones. In the end, they were visible only on television, with organizers forced to use prerecorded video of the drones for telecasts.

At the time, South Korean officials and the I.O.C. struggled to determine what had happened. The Russian officials, according to the U.S. indictment, tried to cover their tracks by taking steps to lay the blame on perpetrators in North Korea, which had made threats to the Games before agreeing to send some of its athletes to participate in a unified Korean team.

With their mission accomplished, the group involved in the successful cyberattack turned its attention to Tokyo, using the same techniques, which included months of reconnaissance work to learn about the individuals and organizations involved in putting together the complex event.

British authorities, according to people familiar with the investigation, coordinated their investigation with counterparts in the Federal Bureau of Investigation, and once they had confirmed with certainty that individuals affiliated to the G.R.U.’s 74455 unit were carrying out reconnaissance work to disrupt the Tokyo Olympics, they contacted Japanese officials to warn them of the threat.

Japan’s chief cabinet secretary, Katsunobu Kato, said Japan would mount efforts to protect the Games. “We cannot turn a blind eye to malicious cyberattacks that threaten democracy,” Kato told a news conference. He added that Japan was in contact with the authorities in the United States and Britain.

Russia’s arbitration hearing against its sports ban — which also includes a prohibition against hosting major sports events — is scheduled to begin in Lausanne, Switzerland, on Nov. 2, after being delayed because of the coronavirus pandemic.

Russia said it disputed the ban “in its entirety,” and Dmitri Medvedev, its prime minister at the time, described the sanctions as part of “chronic anti-Russian hysteria.” Its defense has been undermined by the former head of its antidoping agency, Yuri Ganus, who described the punishment as just and said Russia had manipulated athletes’ records to disguise evidence of doping.

Athletes who can prove they are untainted by the doping scandal will be able to compete at international events, including the Olympics, under a neutral flag.